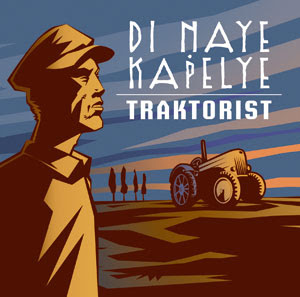 Just in time for Hanukah, it is finally out: Di Naye Kapelye's third CD on Oriente records, entitled Traktorist. It feels like a huge weight is off my shoulders, since versions of this CD have been in the bin for over three years since our initial recording sessions for it over at the now defunct Yellow Studios, located in the old Hungarian Army barracks that formerly housed the Hungarian Communist Army music division. But it is done, finished, and out now, and available from Oriente records in Berlin, as well as from Hatikvah records in the US. Eventually, Amazon should carry it in the US catalog, but it takes time. Like all of our CDs, it isn't exactly mass-marketed... and don't write me for a copy. I only have a couple of promos from our folks in Berlin... 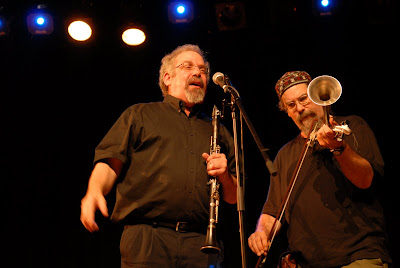 Ari Davidow wrote us a wonderful review, and even stuck us on top of his annual top ten list of Klezmer recordings. Which makes my day. And I sincerely hope it makes Till and Gigi at Oriente's day as well, with special kudos to Michael Vogt for the cover design. The original plan was to record a few sessions in November 2005 during the Hungarian Jewish forum conference, at which time Adam Schoenburger from MAROM was able to bring Michael Alpert and Josh Dolgin to Budapest for a concert on the A38 boat. About half of the material was planned and arranged ahead of time - the other half was done in our usual manner: impromptu jamming and brain storming in the studio, lots of raw takes, and almost no overdubbing or editing to detract from the live quality of the recording sound. 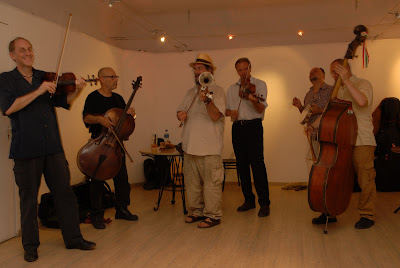 This CD is partly a testament to Di Naye Kapelye's long time connections to the godfathers of modern Klezmer, Brave Old World (above: Michael Alpert and Stu Brotman playing for a klezmer dance with DNK in Budapest in 2006) and it was my first serious introduction to Josh "DJ Socalled" Dolgin. Josh plays uncharacteristically traditional on the CD: piano backup on an old Moskowitz cimbalom tune and Romanian style accordion on "A Briv fun Yisroel" but he later used the studio to record Puma playing kontra riffs, which he used in his own hit video "These are the Good Old Days"We also feature our good friends the Técső Band, a group of Gypsy musicians from the Hutsul village of Tjaciv, in the Western Ukraine. I had learned a lot of their Jewish repetoire, which comes from the father of the Csernovec brothers, Manyo up Csernovec, and decided that the best way to present the material was to simply invite the guys to the studio and let it rip. 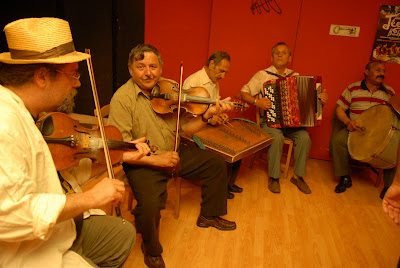 I actually recorded with the Técső Band about six months after the initial sessions while they were in Budapest for some gigs during the filming their documentary film "The Last Kolomeyke" so the studio sessions are included in the final cut of the film. Sadly, these were the last recording sessions for tsymbaly player Misha Csernovec, who passed away about six months later. 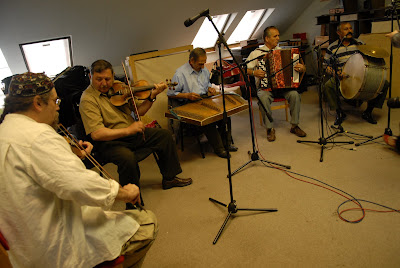 But the best moment on the CD? We brought my son Aron, who was then twelve going on thirteen, in to sing a verse in Yiddish on the Hassidic song "Az Nisht Keyn Emunes." Aron - who knows German from his school - learned the Yiddish pronounciation from Michael and Yankl, giving the song the perfect Brooklyn pre-bar mitzvah Yeshiva bukher sound that you hear on all those cassette tapes one can buy in Boro Park Hassidic music shops. And Yankl pronounced that the session counted as Aron's bar mitzvah. Aron also did a great job singing it on stage at the A38 with his old man. 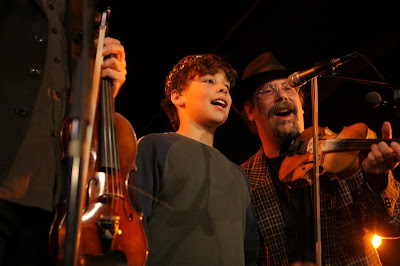 Di Nayes are playing at the Siraly on December 23 for a small concert with Shrayem. We'll also be teaching a klezmer dance session with Sue Foy around 8:30, and showing some archive videos of Klezmer dance to help in teaching. Hope to see you all there! Feri, our cimbalom player, alas, won't be playing, since he's in a cast due to a moped accident in November, and Yankl is in the US, so we'll be a trio. I'll be celebrating the CD release with the band (a bottle of tequila in the fiddle case) so don't expect an awfully linear response if you come up to us... happy hanukah! 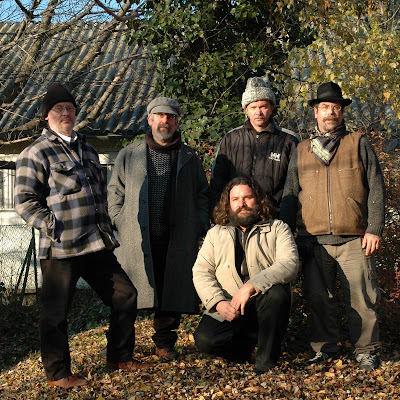 Anonymous said...
This comment has been removed by a blog administrator.
9:08 AM