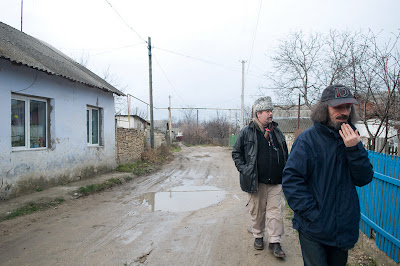 I was about ten years old when I learned that our family name - Cohen - was not entirely our family name. When my paternal Grandfather finally arrived at Ellis Island in New York harbor in 1923, he went through the famously disorienting process of registering as an immigrant to the US. When asked for his name, he answered ""Onitskansky" but according to him the American officials couldn't spell it and asked for his "Jewish name" and he gave it - Cohen. We all have a "Jewish name" given at birth - I'm Reuven ben Yithak ha-Kohen, for example (Reuben son of Issac the Cohen) , and my son is Aharon ben Reuven ha-Kohen. When Grandpa became a US citizen he was offered the chance to return to his old name, but he had already built a business based on the new name and decided to stick with it - Cohen is a pretty high status name for a Jew in any case, nothing to sniff at, really. My Grandfather, Moishe Onitskansky, born in the small village of Krivylyany (also known as Criuleni in Romanian) in 1890 thus became Morris Cohen. 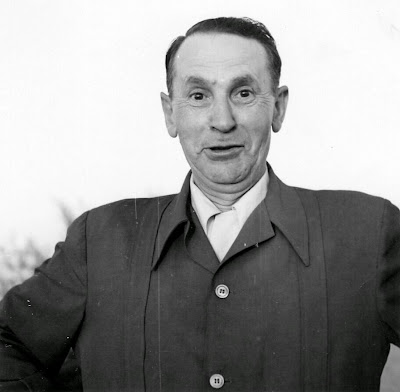 Criuleni/Krivilyany was where my grandfather was born, but after a few years the family (which included twelve siblings) moved to Kihinev (about twenty miles west.) So after leaving Orgeyev with a few hours left in the afternoon, we took a long dirt road through Orhei Veche on the way to the town where my Grandfather was born. Orhei Veche is famous for a beautiful Monastery carved into the rock of a cliff, less famous for a rather dismal prison, and filled with the classic style of Moldovan peasant houses - painted blue. 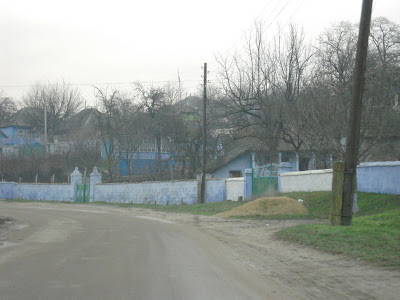 Another half hour of dirt road down from Orhei Veche and we reached Criuleni - which is known in Russian as Kryvyljany and in Yiddish as Krivilyan.) Criuleni is located in the Dnister valley, right across from the town of Dubasarry. Today it is a small town of mixed Romanian and Russians, in my Grandafthers day it contained 600 Jews, 300 Romanians, and 300 Ukrainians. 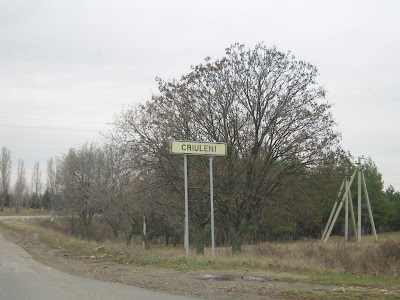 Once we got into the village I asked if there was a Jewish cemetery - I had hoped that I might find some grave stones with the Onitskansky name on them - but the villagers said that the Jewish cemetery was across the river. Which is to say, in the internationally unrecognized Transnistrian Republic. Which is to say, if I wanted to risk a few hundred Euros in bribes to various cossack militias, crooked border cops, the renegade Soviet 14th Army, and assorted local mafia-oids to travel two kilometers east to visit a cemetery, I was welcome to try - the Transnistrians are all too happy to discuss exit visa costs on your way out.
I took the opportunity to stroll around downtown Criuleni, happy to get my shoes caked in the same mud that my own tayere Zeyde walked in a century before. Like I said, November isn't the best season to visit Moldova - the grey skies and muddy streets lend a stereotypical shtetl ugliness to these places that at other times must be lovely - although somewhat less than exciting - places to visit. 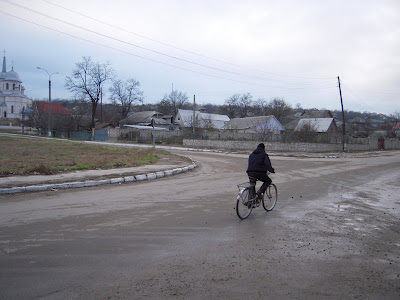 But let it be understood that in any small town there will be a cafe, and lo and behold, nearly every cafe serves a fine hot placinta. No, it has nothing to do with the Hungarian crepe known as a palacsinta, it is rather, what we know in New York as a knish. Mashed potato rolled in strudel pastry, just the thing you need on a cold Moldovan afternoon. And they were always served hot. 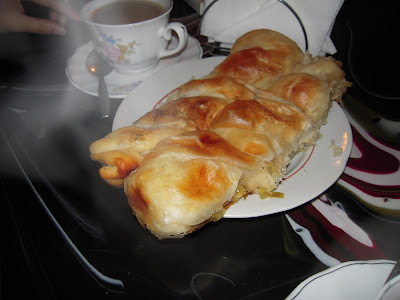 There was not a heck of a lot to keep us in Criuleni and it was getting late, so our driver headed down the road, deciding at the last moment to take a shortcut back to Kishinev. This turned into an amazing bit of luck. Two villages south of Criuleni I noticed a road sign, and at the same time both Fumie and I shouted for the driver to stop. I know it doesn't look terribly exciting, but my family has been asking me for years about the name Onitskansky - where could it come from, what does it mean? Bingo... here it is. (Anybody know the joke about the Fakowi tribe?) 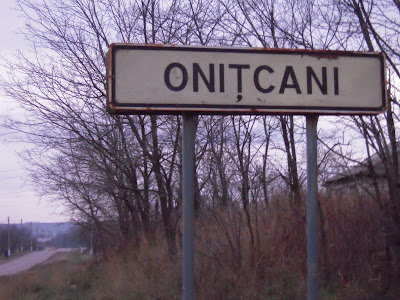 The name Onitskansky is one of the more obscure names in the Ashkenazic family tree - none of my family ever knew where it came from, and apart from immediate family, we never met anybody else who bore the name. Some of my Grandfather's family had left Moldova and moved to Russia or the Ukraine, one branch had emigrated to Argentina, some had stayed in Kishinev, but every time I ever met Jews from Moldova I would ask about the names Onitskansky or Tsarivcan, and nobody ever responded that they knew anyone from those families. I had always suspected that it reffered to a toponym, and the only near match was the record that Oniţcani had been the scene of one of the earliest pogroms connected to a case of blood libel, which is mentioned in a Wikipedia article: In 1726, in the Bessarabian borough of Oniţcani, four Jews were accused of having kidnapped a five-year old child, of killing him on Easter and of collecting his blood in a barrel. They were tried at Iaşi under the supervision of Moldavian Prince Mihai Racoviţă, and eventually acquitted following diplomatic protests. Oniţcani, however, doesn't show up much on maps and the only printed reference I had seen abbout it specualted that it was located across the river in Transnistria. I did, however, find a pretty complete account of the blood libel accusations in an article I dredged up on the academic library archive Jstor.org (which is password protected, so either learn to hack it like I do or email me and I will send you a copy of it in PDF format. The article is "The Jews of Moldavia at the Beginning of the Eighteenth Century" by E. Schwarzfeld, in the The Jewish Quarterly Review, Vol. 16, No. 1 (Oct., 1903.) On one page, there is a small - and significantly misleading - footnote about Oniţcani:

"A little town which has now disappeared..." Well, if any place can be said to have dropped of the map, then Oniţcani can take the cake. It would seem that my Grandfather's ancestors knew how to take a clue and moved north a few villages away to Criuleni. In the end, the blood libel case was dismissed through the intervention of the Ottoman Turkish authorities - who ruled Moldavia through a delicate system of appointing Christian princes such as the famous musician Grigori Cantemir, alongside a set of Greek administrators from the Fanar district of Istanbul who helped make the term Phanariot a byword for Romanian political corruption to this day.
Posted by dumneazu at 9:29 AM

A truly wonderful post. I felt like I was reading an adventure story. It also reminded me that the best travel stories are often those that we stumble upon, without planning to. Just wonderful!

Bob -- have really been enjoying the account of your trip. Hope to c u in bp over the hols. ruth

Amazing. And what a stroke of luck to find your ancestors village! But what is the joke about the Fakowi tribe?

Now, moving to Oniţcani and Onitskansky, it may not be such an Ashkenazic name... In any case, I found an Elina Onitskansky on the web. a relative from the Kingdom of Oniţcani, I presume... ;-) You'll find her at both linkedin.com and facebook.com . BTW, if we stretch it a little, maybe even the name Onciul (as in the politician of the Austrian Bukovina, Aurel, or the historian, Dimitrie -- a relative of my highschool 'benchmate', Mihai Onciul) comes from around Onitcani... ;-)

As for the article "The Jews of Moldavia at the Beginning of the Eighteenth Century" by E. Schwarzfeld, I would like to get the whole article if possible. And... just think, Schwarzfeld must be a cousin...

The 1930 census claimed that 92.3% of the county population was Christian Orthodox (147 churches & 9 monasteries, all belonging to Episcopia Chisinaului / Mitropolia Basarabiei). There were 3 lipovan churches, 1 Catholic, 28 synagogues & 20 Jewish prayer houses (it is unlikely that any were Sefardi* or Romaniote, and not too many native Rumanian Ashkenazi either). Source: http://www.tourismguide.ro/x/judetul_orhei/

Bob, I've met both Jewish and non-Jewish Oneshansky and Oleshansky whose origins are from the Ukraine. Could these be derivants of the Onitcani name?

Anonymous said...
This comment has been removed by a blog administrator.
9:07 AM

My grandparents also from Criuleni I visited there and found the Jewish cemetery up in the hills but with no way to get there. Found some stones that had slid down the hill but nothing of my family. Across the river from this town a city known as the Jewish City. All wiped out by local Russians in battles and later by the killing camp located in what is now known as Transnistria. paul retish

My grandmother was from Criuleni,Basya Alter/Alpert later Abramowitz. I can't tell you how much I have enjoyed reading this post some 10 years later. I hope you have more information.

My grandfather was also born in Criuleni, his lat name was Michnik, later Budeshtsky.