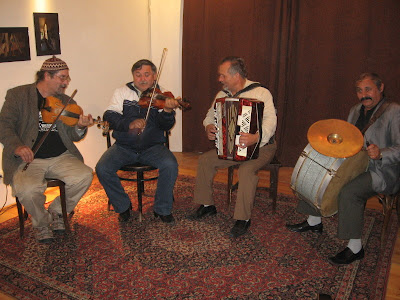 I've know the guys from the Técsői Band for almost a decade, ever since Kiss Feri from Ethnophone Records started bringing this amazing Hutsul band to Hungary for festivals. One of the last functioning traditional bands in the region - in the sense that playing their traditional repetoire in their community as a full time job - the Técsői Banda hail from the western Ukraine, just across the border from Hungary in the multi-ethnic village of Tjaciv, known in Hungarian as Técső (there is a large Hungarian speaking minority, and most of the band can speak Hungarian alongside Ruthenian, Ukrainian, Russian, and Romani.) Truly a band of brothers (with one in-law, Ivan) the Técsői band are the sons of Manyo Csernovec, a Gypsy fiddler and and leader who was reknowned in the western Ukraine as the preferred musician for local Jewish and Hungarian events, alongside Hutsul music. A couple of years ago some Hungarian film makers started working with them on a documentary, and this week the end result saw its premier at the Urania Film Museum in Budapest: The Last Kolomeyke. 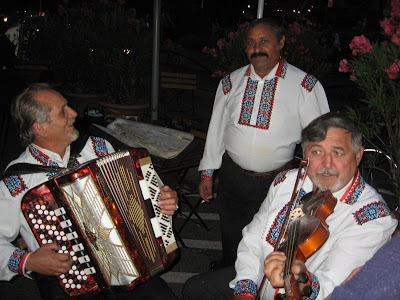 The filmakers followed the band around in Budapest as well as in their home village of Tjaciv, focusing on the friendships that grew between Imre Keszthelyi - their local host and manager - Sue Foy (our own amcsi friend and dance ethnographer of central European dance styles) and me - I recorded a few cuts with Técső for our forthcoming new CD, and the studio session is included in the film. As is usual with these projects, the documenting went on and on and on... but then in 2007 the tsymbaly player, Misha Csernovec, suddenly passed away. The question hung in the air whether the band could continue without Misha or not. They persevered, and this gave the director the story he needed to tie the film together. Unlike a lot of documentaries destined for air play on Hungarian TV, this has a real story, and is not just a bunch of national-nostalgic cliches about Hungarian culture (heck, the guys are Ruthenians!) and the end result is a surprisingly entertaining film. Here is a bit of the preliminary trailer:
After the premier, there was a reception at the Nyitott Muhely gallery in Buda. Sue was there along with the crew and a good crowd, and Szederkenyi Miklos broke out an awfully fine jug of black current home-brew... and so a jam session followed. We played through a hour of the usual Maramures/Ruthenian dance repertoire, and then I sang some Yiddish tune with them, and finally, well under the influence, I tried out a new Jewish tune on them. This is how I usually see if they know a Jewish tune - take one from the post-soviet repetoire of Yiddish music, and let rip. This is an old Transylvanian Gypsy horse-trader's tune as sung by Bessarabian Jews in Yiddish - a true staple of indie rock bands these days - I learned last year from the 85 year old Bessarabian Yiddish singer Arkady Gendler of Zaporozhets, Ukraine, but it is based on a relatively new style Transylvanian Gypsy tune.
Bingo! They knew the tune,but in a different version, which Yura immediately called a "Gypsy tune." They ran through it, which led to a boozey medly of other tunes that hang in the grey area between Jewish and Gypsy repertoire in the sub-Carpathian Ukraine region. The last tune of this set is the tune known in the Satmar region as the "Ghetto tune." I learned it from the late Roma fiddler Andras Horvath from the Szatmar county town of Jankamajitis. I have never understood the meaning of the label "Ghetto Nota" since the Roma were not herded into ghettos in east Hungary during the Secong World War, only Jews. It is a classic Gypsy tune in Hungarian, albeit a rare one, but is always played in the context of any jam session which touches on Jewish music.
Posted by dumneazu at 3:37 PM

Yes, that film of the Técső band does look like it's going to be very watchable - it reminds me of the film that Ernst guy made about Fanfare Ciocărlia here in Romania. Great music again, thanks.

Oops, for the record it wasn't directed by him but by a guy called Ralf Marscalleck.

Hey there,
I sent you a e-mail last week via your blog e-mail link. Just wanted to make sure you got it. You don't know me yet but hopefully the e-mail was enough of an introduction.
Joanna