I've been writing too much about food and Nazis, and not enough about music. Ok, time to take a listen at the upside of things. From now on Friday will be Music Post Day, and I'll try and post something musically oriented to perk up all those jaded ears out there. I'm a fiddler, and although most folks know me for playing old style klezmer and east European fiddle styles, I got my start playing old style American folk fiddle. Although I got my first fiddle as a gift from my

Uncle Jozsi here in Hungary (a $16 Czech violin set bought at the Trial Zene Bolt at Blaha, which is still there. And I still have that fiddle, which isn't that shabby, either.) I learned my fiddling during the folk revival going on in the US during the 1970s, when a lot of the old timers were still alive and playing music and teaching a younger generation. One day I picked up a copy of the US folk music publication Sing Out! and there was one of those floppy vinyl insert recordings included which feature the music of Dennis McGee and S. D. Courville playing an old Louisiana Cajun fiddle tune called Mon Chere Bebe Creole (a few seconds of which can be heard here at track 22.) In an instant, my musical world changed, and hasn't quite been the same since. The magic of one scratchy violin erased my yearning for searing rock guitar solos, long Grateful Dead jams, fusion drum solos, just about everything that my teenage social scene defined as cool music. This recording, made in 1929 of two fiddles and with one vocal soaring above the driving melody was all I needed to put me into the O(ther)-Zone, a sound I have been reaching for in the decades since. The musician was a Lousiana Cajun fiddler named Dennis McGee who was already considered to be an quaintly archaic holdout of old-style French Cajun fiddle when he was recorded playing burning duet fiddle with S.D. "Sade" Courville in the late 1920s. 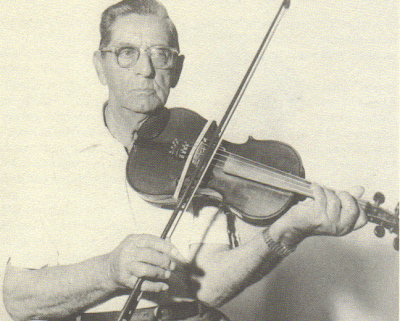 A lot of the music recorded on 78rpm gramphone records back in the 1920s proved to be the last of their its kind. Although commercial recording was still a novelty, low-tech down home music makers would soon give way to a slicker style that could compete in record sales. Dennis and Sade were considered living museum pieces when they began recording in 1928. Dennis was born in 1893, to a Cajun-Irish father and a half French, half Seminole Indian mother. Most of the tunes Dennis played he had learned from his grandfather, who had been born in the 1830s, and whose repetoire consisted of the older French parlor dances that morphed into the full voiced, melodic rythymic Cajun fiddle style over the 19th century befpre the adoption of the single row button accordion in south Lousiana around the turn of the 20th century. Dennis recorded dozens of 78 rpm discs into the early 1930s, and then disappeared from public view, working as a sharecropper and barber and playing for weekend dances and family events. What sets Dennis apart from so many of those musicians whose sound emerges ghostlike from those old shellac records is that Dennis (and Sade, as well) didn't just disappear and die leaving no legacy. No, Dennis lived to be 97 years old, playing nearly to the day he died, touring, teaching and recording his old tunes for prosperity, before passing away in 1989 having taught three generations of musicians the old style fiddle of his younger days. As Michael Doucet once said "Western Civilization has the Rosetta Stone. CajunMusic has Dennis McGee. 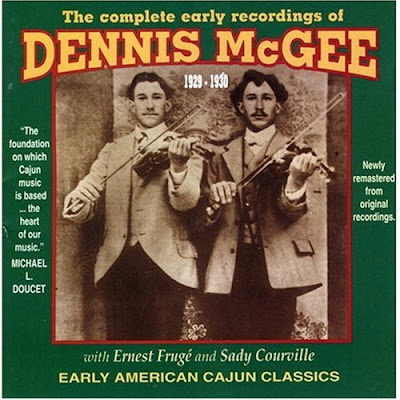 That's Dennis and Sade on the cover of a CD reissue of their older recordings. Amazingly, they continued playing into the 1980s together (Sade passed in 1988, a year before Dennis) and recrorded again in the 1970s. that session can be oredered from the Field Recorder's Collective in the US, and outtakes from that session can be found at the "Hadacol It Something: Cajun MP3" Web site (scroll down about two thirds of the way down the page.) Dennis also played with the legendary Creole accordion player Amedee Ardoin, and several recordings exist of the two of them, such as this version of the Blues du Basile. At that time, there was little stylistic difference between old style Cajun and black/creole french music, and although Amedee met a sad end later in the 1930s, his music went on to influence both the early Zydeco styles as well as being pivotal to the rebirth of the accordion in the 1950s when musicians such as Iry Lejeune resurrected Amedee's old records as Cajun hit material. 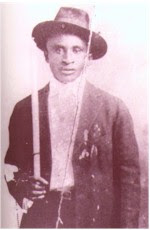 Amedee even has a Myspace page with tunes played by him and Dennis. If you are wondering how to make your fiddle sound like this, look at how Dennis holds his fiddle bow - he stuck his pinky finger in between the hair and the wood at the frog, and draped his rather humoungous fingers over the bow, probably an old habit dating to the days when home-made fiddle bows were tensioned by hand. Watch this video from the 1982 documentary "Cajun Visits" ... and marvel at Dennis re-enacting the bustle of an old time cajun house dance, complete with shouted commands to the dancers.
The foremost student of Dennis McGee was Michael Doucet, fiddler and leader of the Cajun band Beausoleil. Here Doucet tells some stories about touring with Dennis - slightly toned down from some of the tales I have heard. On the guitar is Dennis' son, Gerry McGee, better known as the guitarist for the legendary surf rock band The Ventures.
Posted by dumneazu at 10:17 AM

Very insightful commentary on Dennis McGee, Dumneazu, especially the remark about his bowing style, which is not even referenced in the scholarly liner notes to the Yazoo collection of his essential 1929-30 recordings. Check out what we're doing at TheBluegrassSpecial.com; you might find something you like. We're all about traditional music, but using a broad definition of the term-as exemplified by the review of an Otis Redding reissue in our next issue. Our next cover story, coming on May 15, is in part about Amanda Shaw, the 17-year-old New Orleans prodigy who plays Cajun fiddle and includes Dennis McGee songs in her sets (and has recorded some too). Let me know what you think. --Best regards, David McGee, New York, NY (no relation to Dennis McGee, as far as I know, other than southern roots)

In 1988 I owned a beautiful original copy of "Mon Chere Bebe Creole". I played $400 for it because I am enchanted by it. I went to Dennis McGee's house in Eunice,LA. to ask him to autograph a 78rpm record sleeve to keep with the record. He came out onto his house porch and when I requested his autograph, he said that he was sorry but he couldn't because he was blind. A few years later, I talked to a man in Eunice, who had known him. He said that Mr. McGee was not blind. He couldn't sign his name. But he could make a fiddle cry. I was in Eunice the week he died and have a copy of the town newspaper.