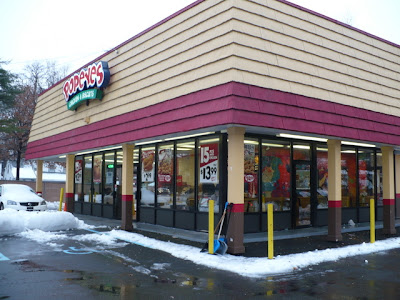 A quick post from the home front. Weather permitting, Fumie and I will run into New York City when we can - such as today's epic trip to the Hungarian Consulate in my ongoing effort to obtain my Hungarian passport. But quite often we are bouncing around someplace in Bergen County, New Jersey, a few miles ( or - for europeans - an even few more kilometers) outside of Manhatten. In Teaneck, when pressed for cheap lunch, I will often spring for the local Popeye's Fried Chicken franchise. Popeye's is the Second Best Fried Chicken in the World. 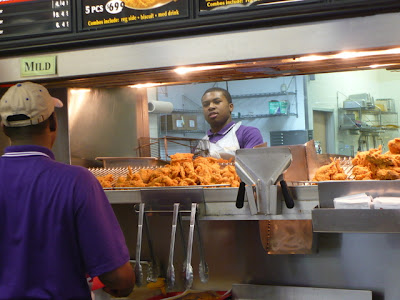 The Best Fried Chicken Franchise In the World is actually Church's Fried Chicken, but they don't have any outlets around these parts. Both are marketed as "Urban" fast food... i.e., food sold in Black neighborhoods. Both Popeye's and Church's offer symbolic "southern" or "soul food" options - cajun rice, fried okra, and at both, biscuits. White folks eat Kentucky Fried. I don't. 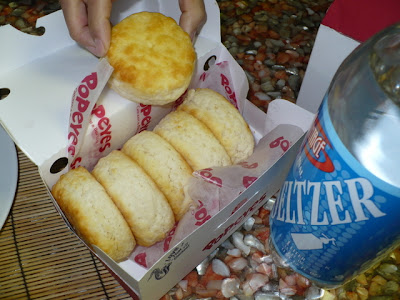 Popeye's southern style biscuits - fresh, these are good enough for a meal in themselves. Note the Hungaro-Judaic bottle of seltzer next to biscuits... there is no gassy mineral water in the US. At all. Carbonated seltzer water is how we make do in times of need. 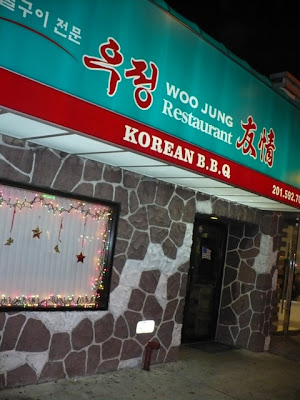 Just down the road from Teaneck is the township of Palisades Park, with the largest local population of Koreans in the North Jersey area. Which is a good thing. A very good thing. Woo Jung Korean Barbeque is just one of about thirty local Korean restaurants in what used to be one of the poorest and most run down towns in North Jersey. The Koreans moved in during the 1990s and totally revitalized the area commercially and socially. And they brought some damn good food. 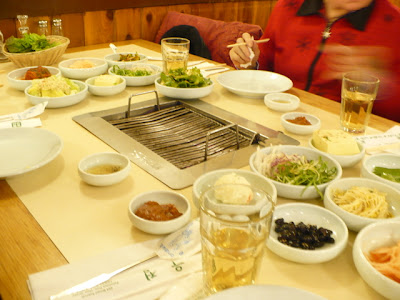 The banchan layout at a Woo Jung dinner. Fumie was hipped to this place by postings written on New York Japanese blog sites. The Japanese are wise to the fact that the local Korean cuisine is better than anything available in Tokyo... and probably the best in the world outside of Korea itself. Below is some galbi - short ribs grilled on the BBQ table. Woo Jung uses real charcoal brought to the table by a waiter, not a gas fired grill... makes all the difference 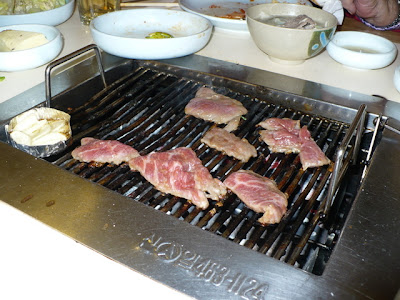 Just over the river is Hackensack there is Wondee's Thai Restaurant - which serves cheap lunch on Main Street to the local Thai community. Fumie is in noodle heaven... she particularly enjoyed watching a local Chinese-American woman try to explain to the very Thai waiter how a "real" Pad Thai (stifle laughter...) should be made. 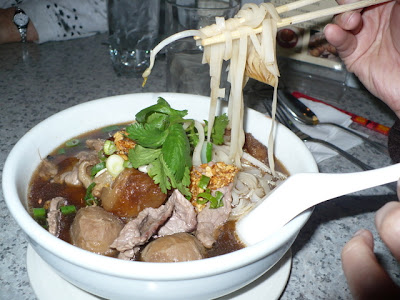 Wondee's is the most authentic Thai place we have found yet - it tends to trip up most Americans who think they know "real" Thai food. Fumie spent months eating in Chiang Mai - where her sister worked for a decade. When Fumie walked in she took one whiff of the smell and said "this is the place." 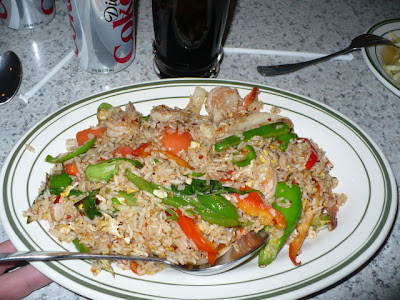 Of course, there are American options to choose from. Legal Seafoods used to be a shack on the Boston Fish Pier where I used to go when I was in University. Cheap, simple, good, and fresh. These days they are a huge national chain, still everything they used to be except cheap and simple. But still good enough for Seafood Woman From Tokyo to attain her invertabrate fix. Behold the lobster. The last lobster we set eyes on was in Croatia, it had no claws, and it cost something like 100 Euros. This was cheaper, and had claws. Fumie ate the claws. I got some tail and the exquisite soft shell steamer clams and mussels. And I also got to eat some of the tail.... 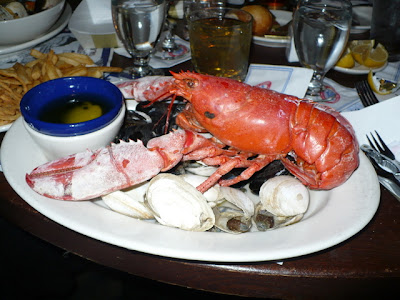 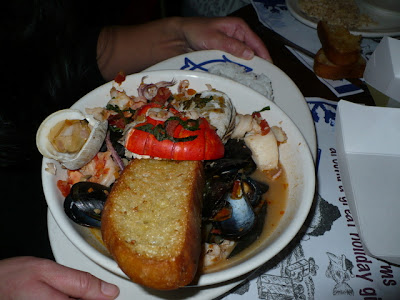 And since it is Xmas season, we want to wish you all a merry Christmas and especially to those poor promotional saps from Ontario forced to stand in a freezing giant fishbowl in Bryant Park in NY City promoting the exotic winter pleasures available in far away.... Ontario... Canada... 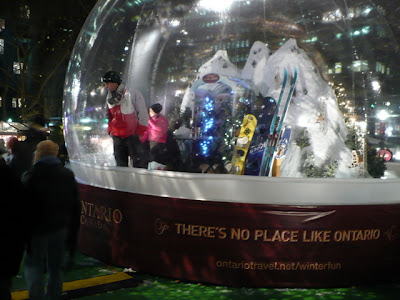 I'm happy to hear you like Legal Seafood. But I don't see any of their onion strings in the photos. They beat the french fries hands down!
Happy Holidays all around!
;o)
- Lee