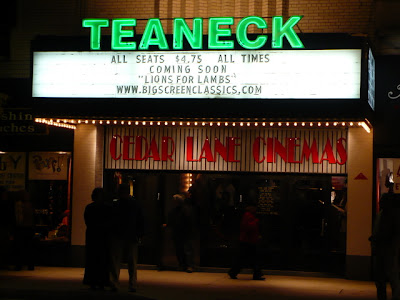 It's Dec. 24th, Christmas eve, which Ashkenazic Jews traditionally celebrate as Nitl... which means the day we play cards. Nitl colloquially means poker or pinochle... and besides Easter it was the one day of the year when there was absolutley no reason to open the businesses and so everybody stayed home and played cards. In deeper terms Nitl derives from the latin natal - in reference to Christmas as the birthday of Josh C. (son of Joe and Maryam C. of Teaneck and Nazareth.) Like a lot of Yiddish terms, it comes from Latin via Judeo-Provencal, or Shuadit, the source from which we get terms like bentshen (prayer.. from latin benedictum) and leyen (reading... from leer). Nitl customs included not going to the Talmud Torah to study on the evening of Dec. 24, because of the danger of angry gentiles jumping Jews in the streets (summed up in the folk etymology "nit" which means "not" in Yiddish. There are, however, other interpretations... 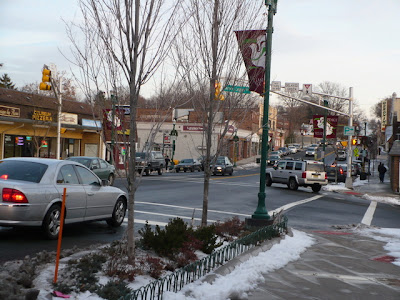 This year nitl finds us in Teaneck New Jersey, a mere five miles from New York City. Teaneck is one of the most Jew-friendly towns in the USA, with dozens of synagogues and Jewish schools all within a sabbath's stroll of one's home. When I was growing up here there weren't quite as many Orthodox, but today the "downtown" area on Cedar lane is one long string of Kosher eateries, shops, and Judaica stores. 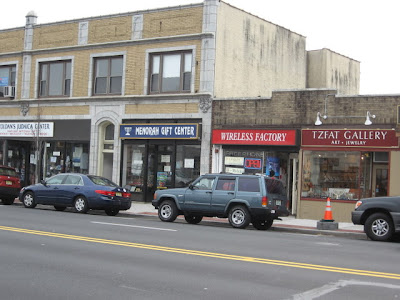 Our local shops and supermarkets keep lots of classic Ashkenazic chow on hand... 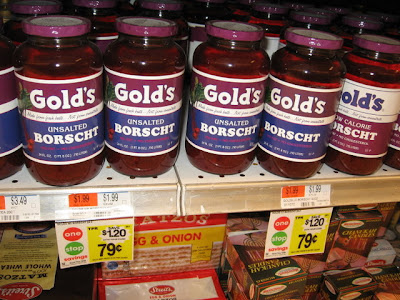 A few months ago our own Yankl Falk, singer and clarinetist in Di Naye Kapelye came through town and eased his glatt kosher bad self into a booth at our local Tex-Mex kosher Barbeque restaurant. You don't get much kosher BBQ out in Oregon, where Yankl hails from, and within seconds the atmosphere was surrounded by a dense haze of suspended BBQ sauce as our kosher frontman attacked his meat with an orthodox frenzy. It was a frightening sight, but in a decidely Jewish way. Frum Yid meets Tex-Mex. Amusement ensues. 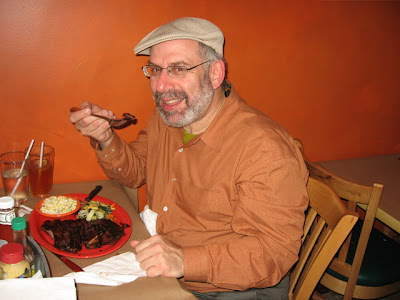 The ease of living kosher has made Teaneck a magnet for young Ortho families itching to get out of Brooklyn and into the wide open spaces of... New Jersey. It's more family friendly. And not quite as insular as Boro Park or Monsey... for example, Teaneck also boasts a healthy Muslim population complete with Islamic school and mosque, not to mention any number of immigrant families who are always leaving the cramped spaces of New York for the burbs. Below is the classic lineup for lunch, all in a row: Indian grocery, Subway sandwich joint, and Best Glatt Kosher Meat. 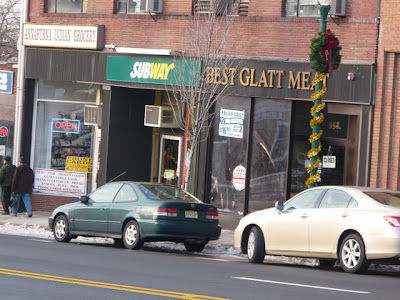 A community as diverse as this is bound to produce ironic juxtapositions... how about a Shrek menorah for this Chanukah? (For those that don't know, the more deeply one delves into Jewish religious tradition, the less importance one ascribes to Chanukah as a major religious festival. It's one of the few "happy" holidays Jews celebrate - we won that particular war in 165 BC- and it's in December. But it just ain't a Jewish version of Christmas.) 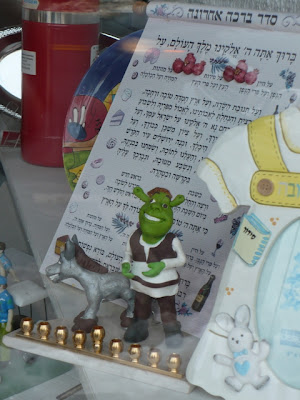 Still... you wouldn't want to leave your home without locking your doors... so maybe you need... shabbos locks? These are devices that operate electrical equiptment (which is forbidden on sabbath) by breaking a connection instead of completing a connection. Yeah, you need to be a talmudic scholar to understand the logic behind this, but in Teaneck almost everybody is a talmudic scholar, so... 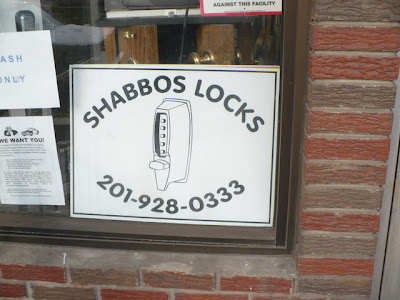 Still... Judeo-Buddhist couples need to find some common ground for a holiday atmosphere, and who could argue with a strikingly beautiful matched pair of penguins! I'm not sure whose mythology fits penguins into this time of year. 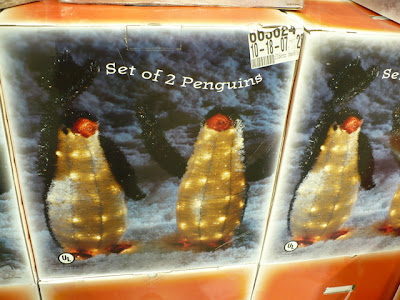 Most established religions have - surprisingly - left out all mention of penguins and their role in the Big Scheme of Things. No... no penguins in the book of Maccabee. Romans, yes, penguins... not quite. Nope, can't find any reference to Christ tossing miraculous anchovies to the penguins. Penguins changing money on the steps of the Temple?... no, that doesn't check out... Barrabas... no, not a penguin... Can't seem to find any references in the Buddhist traditions to the Ineffable Oneness That Is Called Penguin. And ye shall know them by their stubby flightless wings and waddling gait. And they shall be deemed cute unto thee and cause you to buy big stuffed versions of their likeness. 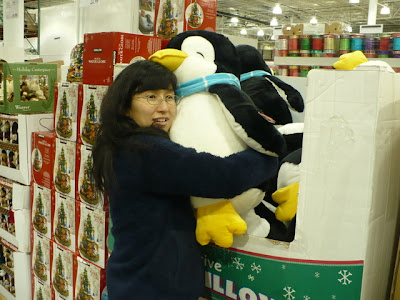 Penguins have played a large role in my mythology (judeo-cryptozoological) since I saw a show on animal planet featuring a japanese penguin. It had been trained by its owners to wear a backpack and walk (ok, waddle cutely) down to the local fishmarket, buy fish (!) and then carry it home in the backpack. How can you not believe in god after seeing that????

also, my seltzer maker is shaped like a penguin. You press his beak and he forces CO2 into water.