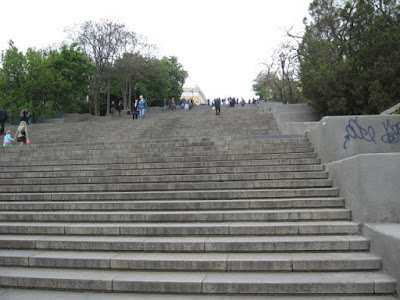 Odessa. Few cities carry as much oral history to Jewish families as this beautiful Black Sea port. Russia formally gained possession of the area in 1792, when it became a part of Novorossiya ("New Russia") the vast south Ukrainian steppeland that had once belonged to the Ottoman Tatars. As in Kherson, the area was populated by a mix of colonists, including French, Spanish, English, Germans and Jews. French and Russian were the primary spoken languages, and Odessa - although located in the Ukraine - is primarily Russian speaking today. Waiters in cafes still often use the term rubel (instead of the Ukrainian name for the currency hrivny) when telling prices. 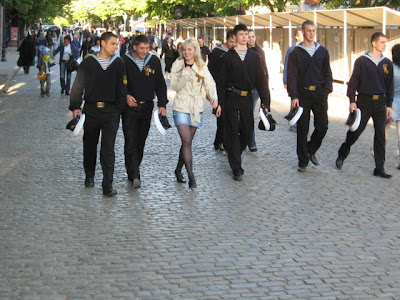 In 1905 Odessa was the site of a workers' uprising supported by the crew of the Russian battleship Potemkin. Sergei Eisenstein's famous motion picture The Battleship Potemkin included a scene where hundreds of Odessa citizens were murdered on the great stone staircase (now popularly known as the "Potemkin Steps"), in one of the most famous scenes in motion picture history.
Odessa was unique among Jewish communities in the Russian Pale of Settlement in that its Jewish community - 30% of the population - was not governed by a Rabbinical council, but by a secular Jewish self government. Jewish refugees of the pogroms flocked to the prosperous and relatively liberal city - including my Grandparents, who fled to Odessa from Bessarabia after the 1906 Kishinev pogrom. This led to the developement of a lively secular Jewish culture, the presence of hundreds of Jewish taverns and bars, and eventually to a whole genre of Russian language "Odessa songs" in a style that mixed Yiddish folk music, Russian estrade, and old jazz into a particularly local sound, beloved by Soviet Jews. 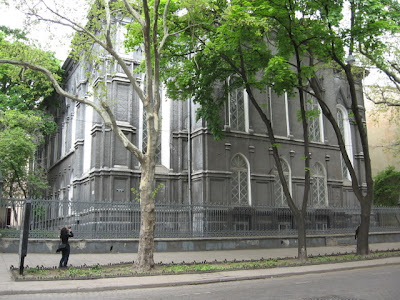 Duringt he Soviet era, the Jewish population of Odessa assimilated into Russian speakers - according to Prof. Dovid Katz, who did a survey of Yiddish dialects including Odessa, today there are very few old people who still speak Yiddish. Still, the Jewish presence is evident in even the street names: Jew Street.. a major downtown thoroughfare... 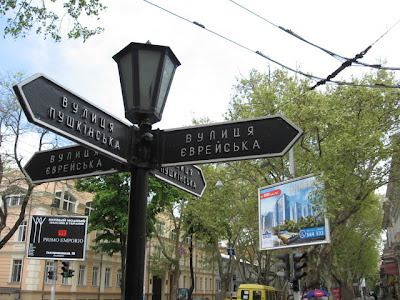 Just off of Jew Street was the main Synagogue. On a weekday, still used for Talmud Tora by what appears to be a Chabad Lubavitch dominated congregation. 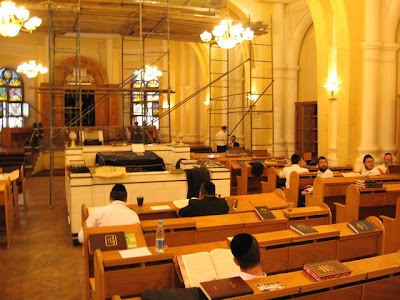 The old Jewish quarter, the Moldovanka, the focus of so much Yiddish song (In Ades, in Ades, af di Moldovanka/ Ikh hob gelibt a meydele, a greyser charlatanke!) is no longer what it once was. Most folk under the age of seventy could not even tell you where the neighborhood was. 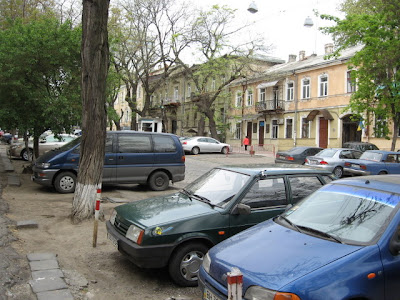 Eric, Drorit, yours truly, and Fumie in front of the old Synagogue. 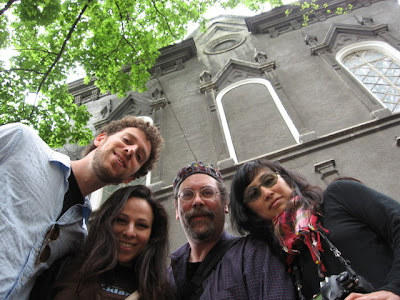 Jewish identity need not be a matter of solemn reflection and good taste. In the Odessa Jewish musuem we found what appeared to be a dancing Santa Claus doll dressed as a hasid, mechanically davening at the entrance to the Museum. Yes, this is the museum run by the Odessa Jewish community. You often find odd takes on Jewishness among assimilated Jewish communities in East Europe... one man's offensiveness is just another man's kitsch. 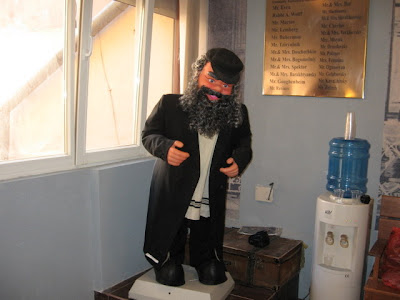 Lunch was to be had at a small working class cafeteria... including pelmeni, which are small meat filled dumplings. Usually, in the Ukraine, these are larger and called vareniky, but such is the stubborn Russophilic identity of Odessa... 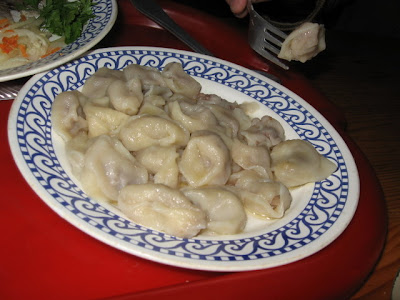 Strolling around town, one gets a truly mediteranean feeling. The architecture is glorious... 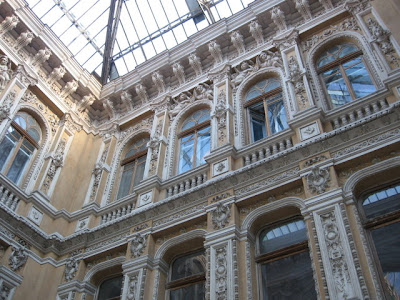 But the dancing hasid dummy... you have to see this in action. I actually did a shakey pan shot around the museum just to prove that this thing actually is an exhibit in the Odessa Jewish Museum. This clip actually was a Youtube hit when I first posted it...
Posted by dumneazu at 7:22 AM

Just stumbled across your fascinating blog by way of ... well, it doesn't matter. Anyway, the Jewish stuff is interesting, as it's my heritage, of which I know little about. It is said that I had a grandparent from Odessa or thereabouts, and I have some leatherbound prayer books (or at least there is Hebrew lettering on them) that I believe were his. Cool!

I liked your pictures and review of Odessa.

Hope someone can help me. Has anyone heard of a Rudolf Mikhailovich Tziporkis? He would be the son of my great uncle. He started the "Old Odessa" Museum. Being of some notoriety, I thought there might be a biograph written about him. Is there any such information available?
Barbara