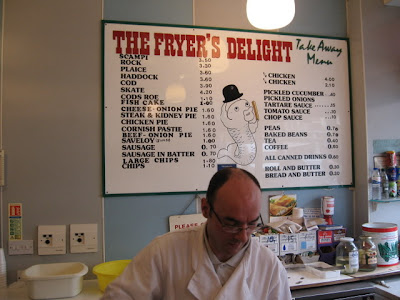 London may well be one of the world's most expensive cities - nasty for visitors and residents alike. While in New York you can always find a great cheap meal if you have the patience, London is a lot less forgiving if you want to have lunch without taking out a bank loan. Fortunately, the English working classes have to eat, and for the last 150 years lunch has meant either a meat pie, or Fish and Chips. 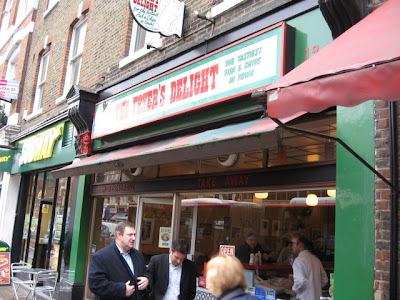 I asked Budapest's specialist on all things Cockney, Mark the Very Large Guy, what he could suggest for a chippie in downtown London. Fish and Chips joints aren't all that high-end, and with rental prices going crazy, you don't find many in the high rent districts of downtown London. Mark mentioned The Fryers' Delight at 19 Theobald Place near Holburn, just a fifteen minute walk from my hotel. This is the real thing, where the cab drivers and London cops (er... bobbies?) come for lunch. The fish is fried in rendered beef fat, and while there are lots of options (rock, for example, is a coastal shark like dogfish... plaice is essentially flounder) I opted for the classic cod and chips. I prefer haddock fillet, but Large Mark had said that the Fryers Delight hit the target for cod and chips, sooo... 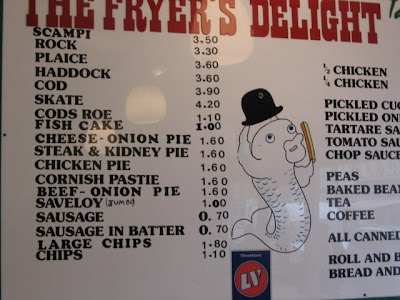 The Fryers' Delight was packed so I had my fish wrapped up and went around the corner to a small park for lunch. Delicious, perfectly fried cod fillet in a cripsy batter, with the traditionally soggy, beef-fat fried potato chips doused in malt vinegar. As with any good fish and chips lunch, the fish was a huge piece, almost too much to finish... but gooood. Oh so good. 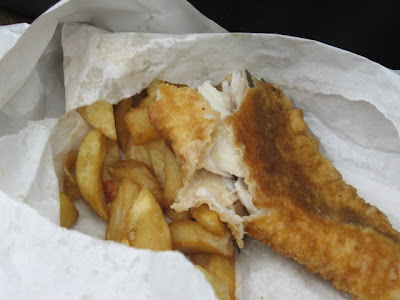 The other cheap lunch option was "pies"... meat pies, a peculiar British culinary tradition that doesn't seem to have traveled anywhere except the upper peninsula of Michigan, where Cornish Pasties are considered a proud mark of North Woods identity. Now, it is easy to classify British food as "stodge", but face it, when you live on a chilly, rainy North Sea archepelago, sometimes you just want to eat some stodge. That's where the meat pies come in. 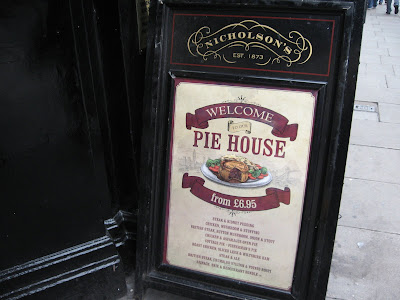 Still, when you are running to catch a train at Euston Station, it's nice to grab a handy, filling steak and stilton cheese meat pie at the nearby Cornish Pasty stand. 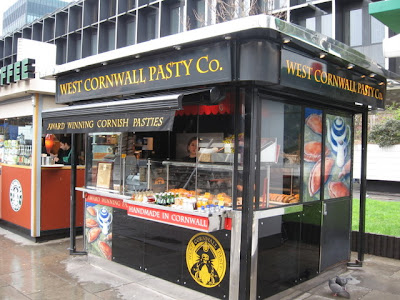 Pies have taken off in Australia too.

There's even a pie floater customarily sold in the city of Adelaide where a pie is eaten in the middle of pea soup!

Hi-
British meat pies (round, generally made with pork) made it to Rhode Island and southeastern Massachusetts. You can still buy them at Hartley's. But unfortunately no Cornish Pasties in the area!
- Lee

These Cornish pasty stands at London stations have come from nowhere... never used to be any until about two years ago, now they're all over the place!

This is so odd, I wanted to go to Fryer's Delight on my last trip to London but I didnt make it. And you took the same photo of the cornish pasty place at Euston that i did, only a few weeks before.

good god, i havent felt so patronised for a long time.....