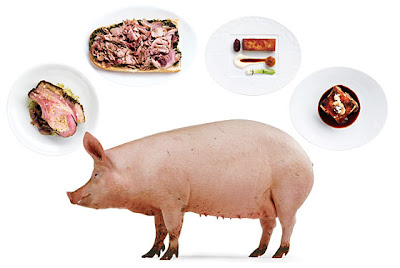 The food associated with Easter is often themed along some aspect of Jesus Christ's famous symbolic attachments, such as pascal lamb, loaves and fishes, and chocolate bunnies. OK, maybe not bunnies. But as many of us know, Mr. Christ was - like myself and so many others - a Jew, a Yid, a Member of the Tribe, a screaming Yahoodie, so much so, in fact, that there were a great many of the tribe who took the Carpenter of Nazareth to be the Top o' The Yids Himself. The Messiah. The King of da Jews. With yikhes like that, the one thing you wouldn't expect Jesus to be eating is.... pork. Chocolate bunnies, maybe, but not chazzerei...

It makes one wonder where the Hungarian custom of treating Easter as a kick -out-all-the-stops ham-feed comes from, but there is no use in debating it. If it says "oink" and it can be salted, smoked, and steamed, it is eaten on Easter in the Carpathian basin. Easter weekend is a veritable glutton fest of ham in all its porky forms. Families gather to down huge groaning platters of boiled or baked hams accompanied by hard boiled eggs (at least that is a symbol of spring largesse....) For the two or three weeks preceding easter, special stands are set up at markets to sell all kinds of smoked and cured pig bits. 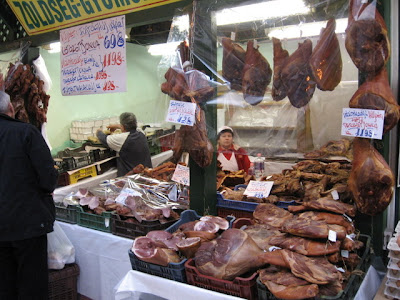 This flood of easter ham brings the price of cured pork down to the level of a pack of chewing gum. It's like the country just can't get enough ham - there are ham stands in every aisle of the supermarkets, ham carts at the corner, add-on ham tents at the corner butcher shop. Pork everywhere you look. Mountains of hocks, rivers of lard. Every year there are angry editorials in the Hungarian press about the dangers inherent in eating cheap hams imported from Slovakia, or about illicit Ukrainian smoked pork hocks being smuggled over the borders. But the truth is Hungarians love pork, and eat a lot of it, and during the year ham is generally not as cheap so at Easter, so the nation goes ham-wild. 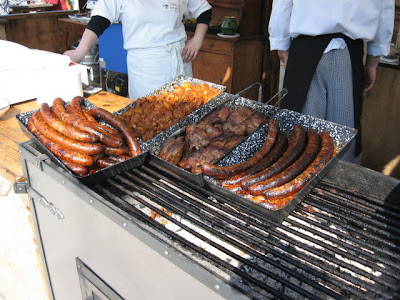 Although Easter mean ham, spring, on the other hand, means simply getting out of doors, and that means more pork to gobble down. We had to do a photo shoot at the Railway Historical Museum way out in the back end of Angyalföld... and what is a glorious Sunday out without a bit of grilled Hungarian sausage... 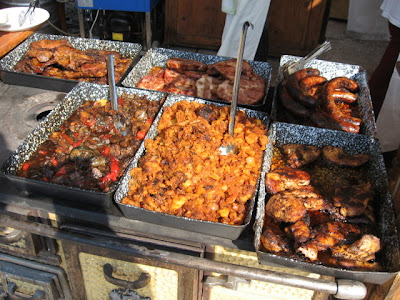 Or a tray of smoked pork chops fried in lard, pork stew, and some bacon seasoned potatoes... quite honestly, how on earth you could follow this up with dessert is beyond me, but there it is... staring you in the face.... 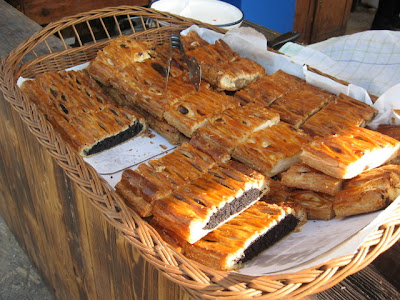 Some of the best looking strudel I've seen in a while. The white fillings are cheese, the black fillings are poppy seed. There is enough poppy seed inside these babies to keep you failing your drug testing pee-tests well into the next century. It's sad, but in the US it is legal to deny work to a prospective employee who fails a drug test because opiates show up in the seeds of legally available poppy seed bagels. And Switzerland forbids importation or even mere possesion of poppy seeds. Now as any culinary scientist knows, the active ingredient in opium is absent from the seeds, but the tests are designed to detect the traces of any part of the poppy plant. Outrageous and absurd as it may seem, all that was simply a buildup to posting these photos of a couple of majestic old time commie locomotives. Enjoy your strudel. And ham. 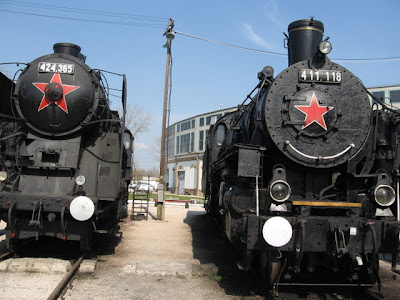 I love your blog! I believe the pictures show poppy seed cakes. The strudel is made with filo.

You're showing poppy seed cakes. I believe the strudel is made of filo.