Negreni: "Excuse me, is your name Gabor?"

The last big peasant market fair in Europe takes place in a mountain meadow in the negligibly small village of Negreni, in Bihor county, Romania. Traditionally, fairs like this were places where people from different regions would meet annually to buy, sell, and meet relatives and friends who would otherwise be divided by mountain passes during most of the year. On Saturday and Sunday clothing, tools, antique, and simply junk sellers stake out the river valley. On Monday the field becomes a market for farm animals. I go almost every year. 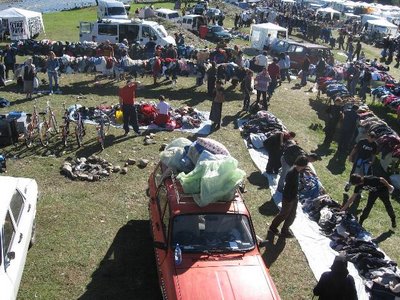 Today, most of these fairs have become folklorized kitsch-fests. Only the Negreni fair – called the Fekete Tó Vásar (Black Lake Market) by the local Hungarian population – maintains its original function on such a huge scale. Each October thousands of Transylvanian peasants, Gypsies from all over Romania, and a few hundred curious tourists and antique dealers show up on the banks of the Cris River to bargain, buy, and beer away a weekend. 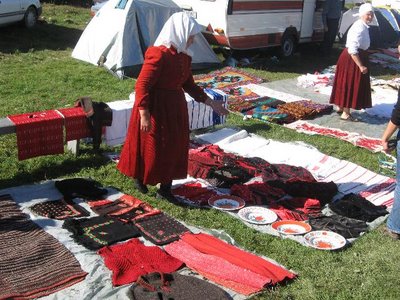 Although Romania is set to join the EU in January 2007, the majority of Romanians live on incomes well below the EU poverty line, and have for a long time. Isolation under the Ceaucescu regime and subsequent lack of development had the effect of maintaining a rural culture in which people still made most of what they needed and used at home. In many villages, cash is rare commodity, and selling old clothes, peasant costumes, or antiques is an important way to make money. 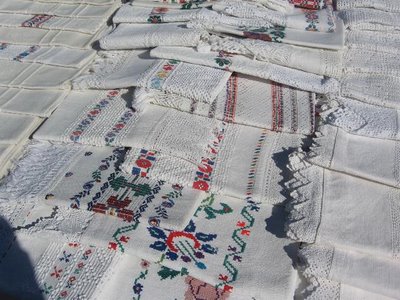 While peasants live on what the land can provide, Gypsies live by what they can provide for those who own land. This woman is a Rudara, also known as the Lingurar, or spoon-makers. The Rom in Romania were held as slaves for 400 years, and during that time many, like the Rudari, lost the Romanes language and now speak only Romanian. I met a lot of them in Bulgaria, where they worked as dancing bear leaders, and in Hungary and Croatia, where they are called Baias - known in the US as Boyash Gypsies. These wooden troughs are used when pigs are killed to mix sausages. 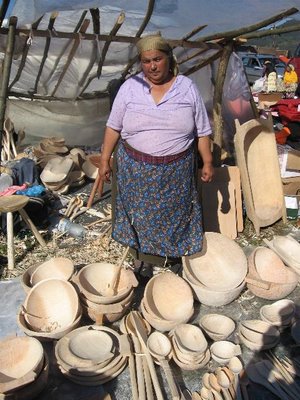 Cauldron makers. You may not have seen these used on the Food Channel, but when you have to feed three hundred wedding guests or boil two pigs down into head cheese, you come to appreciate having a village of cauldron makers nearby. Most cauldron makers are from the Kalderash tribe, one of the most widespread groups in the Rom world. 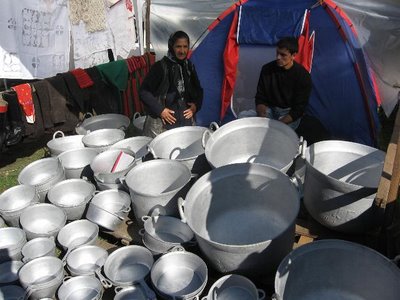 A Gabor Rom selling kazan. Kazan are stills used to distill plum brandy, known as tsuica in Romanian or pálinka in Hungarian. Nearly every well off peasant family brews their own, and Transylvanian pálinka is known for its strength – it is usually about 100 proof. 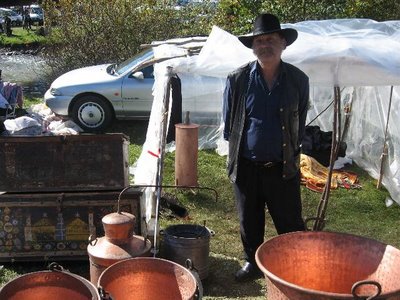 Transylvanians drink a lot of pálinka. A shot at breakfast usually starts the day, and shots accompany virtually all social occaisions. Pálinka is also considered a medicine. Got a stomach ulcer? Try pálinka mixed with honey. Bronchitis? Pálinka with herbs. You’re going to die anyway, so why not from pálinka…. it goes especially well with a breakfast of stuffed cabbage. Notice the clear liquid in the soda bottle on the table.. it is not water. 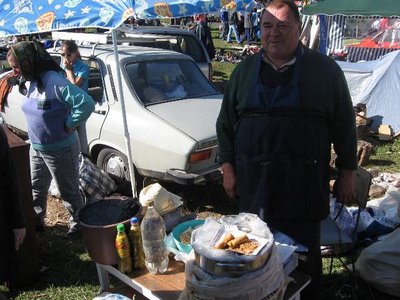 The Gaboresti are an offshoot of the Kalderash tribe that probably came under a heavy Saxon influence in the 19th century. Almost all of them are named "Gabor" - Janos Gabor, Rafael Gabor, and of course, Gabor Gabor. I once even met a woman named Gabriella Gabor Gaborné (Mrs. Gabor Gabriella Gabor.) Gaboresti occupy one of the highest rungs in the Rom status system, being quite well off from their occupations as market sellers everywhere around Europe. They are known for putting their profits into building huge homes for their large familes, with an emphasis on shiny steel filigree roofs, like these in Huedin (Bannfy-Hunyád in Hungarian) about fifteen kilometers south of Negreni.. "Gabor Palaces" seem to be in a perpetual state of construction. 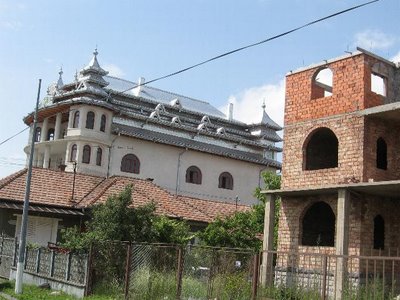 Negreni is one of the major meeting places for Transylvania’s large Roma population, and is a major social event where families reunite, feast, and party until dawn. 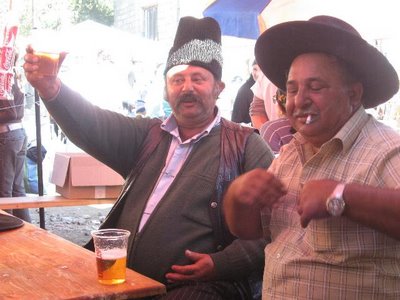 A lot of Transylvanian Gypsies are Seventh Day Adventists - especially among the Gabors and some musician families - who do not drink alchohol or eat pork. (Mind you - beer isn't considered alchohol by anybody except breathalizer test analysts anywhere in east Europe.) This is replaced with a sense of market capitalism that would make Marx spin in his grave. You name it, they sell it. Chef's knives and boxed sets of kitchen utensils are big Gabor items, and they do a brisk business in imported bed linens from Turkey. 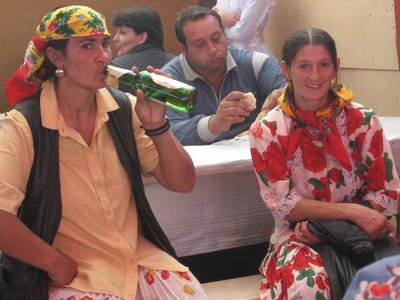 Their costume - immaculate colored skirts for women, black baggy pants and huge cowboy hats for men, black leather vests for both men and women - make them easy to spot. I've met Gabors in Budapest, Paris, Milan, and Istanbul. They look you straight in the eye, and if you are wearing a big enough hat, they shout out the greeting "Szervusz, Gabor!" 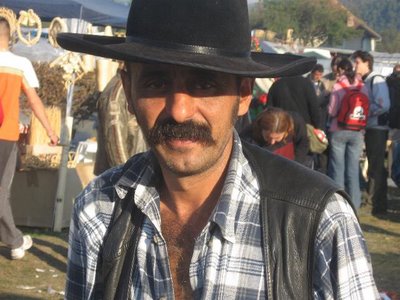 While drinking a beer, one Gabor family sat down with us - this is direct marketing, remember - and eventually the wife of the family began to ask for money. Look, even Gabor Gypsies beg. The old man asked me "Won't you give something to help the poor Gabors?" I answered "Well, the Gabors aren't famous for being poor." The old guy looked around, cracked a smile, and said "Yes. You're right!" They are some of the friendliest people I have known in Transylvania. 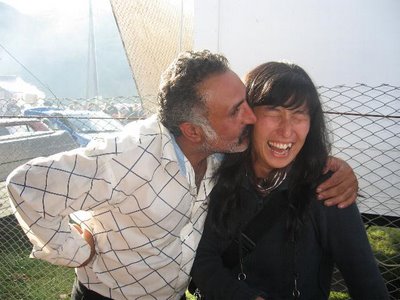 Thanks for that - I really, really would like to go to this market next year. I'll start planning on it.

Hello ,
Are you sure that Negreni is into Bihor County ?
It is into Cluj County .
No problem .

Anonymous said...
This comment has been removed by a blog administrator.
2:19 AM

need information please:
would someone had been there and knows:
what is the exact date of the fair this year (2016)?
,and where you can stay in the village(accommodation