It has been a heck of a ride, 2021 has. Rarely has a year been held in so little esteem as this last one, So I am not sad to see it go. 2021 set a pretty low bar for 2022 to pass, so I am heartily looking forward to a year that lives up to its reputation as being "sometime in the future." By the future I mean a mixture of hope, progress, and no more of this damned covid pandemic... although Dr. F says to expect that the pandemic will probably fade sometime in 2024. This is what we call a "dystopic future" if you ask me. (Actually, somebody out there is presently pregnant with George Jetson... George Jetson who will be born on August 22, 2022. At this rate we will never get to enjoy Spacely Sprockets during our lifetime!)

Presently I am located four miles west of New York City in a reclaimed swamp that was once the northern boundary of what the new Netherlands Dutch rulers of old New York called "The English Neighborhood" and today we call Teaneck New Jersey. My Dad and brother still live here so we are visiting for the holidays. Dad is now  a spry 95 and to keep him that way we have to be extremely careful not to track any virus into the house, and because of the Omicron variant we have not even gone on any trips across the Georgé Washington Bridge into the city a mere four miles away.

On the other hand, New Jersey is more than the sprawling wasteland of suburbs, industrial zones and reeking foetid swampland that first greet the eye and nose of visitors. It is also the the place that everybody from the Bronx moves to when they get enough money. It is home to huge and varied ethnic communities seeking better schools and homes with gardens for their children after saving money for years in the Bronx. And within a ten minute drive of Teaneck we have the largest Korean neighborhood in the USA. We also have a lot - I believe the proper term is "fucktons" - of Turks who have opened bistros and kebaberies and baklava cafes that would not seem out of place on Istikklal Caddesi, Filipinos have entered into our sphere, bringing garlic pork and industrial sized cans of tuna into our lives. And Italians... And of course, my own people: Jews. Teaneck is full of 'em in all their Modern Orthodox, Beys Yaakov School Kosher splendor. Teaneck is also home to a large Muslim community, with a Medressah and mosque and lots of Halal pakistani grill houses. Teaneck is also famous as the first town in the USA to voluntarily desgregate its school system in 1965, and has always been a magnet community for Black musicians working out of New York. Jimi Hendrix lived here for a year while he was guitarist with the Isley Brothers - a Teaneck institution. When I first moved to NJ from the Bronx their son Riondo Isley was the first kid to beat me up on the school bus.

Later we will make a trip to the next town over, Englewood, which is home to the fabled Crispy Crust Pizza shop. In 1979 the world of pop music changed forever when the Sugarhill Gang released "Rappers Delight" - the first hip hop song to break into the top 40. The Sugarhill Gang were comprised of some of the guys who made pizza at Crispy Crust.Producer Sylvia robinson had heard rumors about a new kind of Black party music coming out of sound systems in the Bronx, and sombody tipped her off that the pizza guys at Crsipy Crust used to rap in the back while baking the extra large cheese with sausage. Personally, I haven't been eating much pizza these days. I tend to go for the Clemente's Special Italian sandwich from Clemente's Bakery in Hackensack, NJ.

But the saving grace of being stuck in Teaneck is the proximity of so much incredible Korean food. First of all, we have H-Mart, the Korean mega-supermarkets that have fish and vegetable selections that we can only dream about in Hungary. 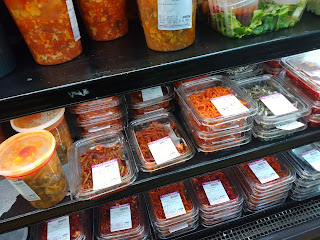 Kimchi everywhere. Not everybody loves this ubiquitous Korean pickled cabbage, but we do, and once you get the taste for it you dump it in everything. On our way home from Newark airport we were able to get to the Leonia H-mart before it closed. We picked up kimchi, some Korean seafood pancakes, some sushi rolls, and some noodles, thus saving us from having to arrive home to a dinner of cold Ball Park hot dogs my brother had left for us. 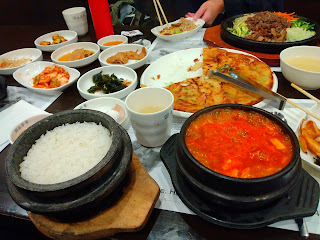 At SGD Dubu So Gong Dong restaurant in Hackensack, Korean Tofu soup. Kimchi beef tofu soup, to be precise.  Served with a tableful of banchan (small plates of kimchee, pickled radish, seaweed salad, and often a whole fried fish) with a seafood rice pancake on the side to top it off. This restaurant is located across the parking lot from 99 Ranch a humongous Chinese superstore that supplies anything H-Mart forgot. We're good for now... just finished our New Years eve Japanese tempura feast. tiger prawns, squid, Japanese sweet potato, shishito peppers, egglant, and onion fitters. At midnight we eat noodles. Don't ask why... I married a Japanese woman and thus it shall always be on New Years for ever after, Its noodles from here on down. 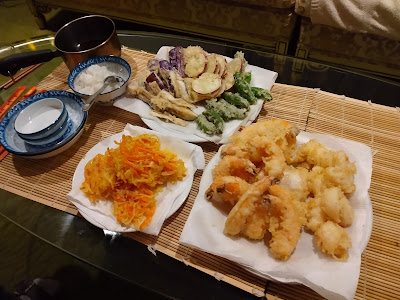