The Magnificent Glory of the Hungarian Summer Tomato. 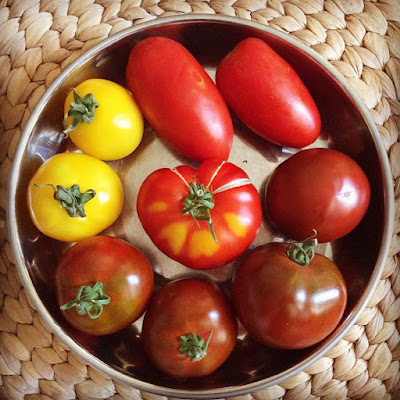 In Hungarian we have a term for the summer doldrums: uborkaszezon. Cucumber season. Its the time of the year that the newspapers have so little to report that they fill up their pages with feature stories on the cucumbers ripening, or the glut of zucchinis in the market, or the multimillion Euro political manipulation of the watermelon market within a one party system (this is Hungary, after all...) But there is one thing we in East Europe (or more accurately, the Eastern East Central North Balkans) have that makes summer here so enjoyable is the quality of tomatoes. Yes, the humble red emigrant from North America that comes into season around this time of year (fuck you, cucumbers!) tomatoes make summer in Hungary 600% better than summer in the United States.  Because we have tomatoes. Real tomatoes.

The tomato in the USA are the product of so much genetic fuckery and market compromise that the original product - the tomato - has disappeared and been replaced by a uniformly pink and flavorless tennis ball shaped orb of cottony mush. Americans today can not really buy a real tomato. It simply is not available. There are some folks who do grow them, and maybe a few farmers markets that sell them, but I have not tasted a fresh tomato worthy of the name in the USA for decades. If you want to taste tomato in the USA, you get a canned Italian tomato. You can got to trendy restaurants in New York and the chef makes your salad with slices of those watery pale pink grainy, mushy tomatoes because there is no way an American chef under the age of forty is going to remember what a real tomato tastes like, much less where to get one. My brother is a chef, and he states that the taste of a modern tomato in the US is simply "wet."

When we travel around in Europe, we always make a beeline to the local open market, and since staying in a hotel rarely provides us with anyplace to actually cook, we end up eating a lot of tomatos, and then rating the countries not on their cultural success or political arguments, but simply on the quality of their salad ingredients. The absolute best? Krakow Poland in early July. Not kidding. Big whopping tasty tomatoes. Second Place: Croatia. Those folks have never played genetic Orphan Black games with their salad ingredients. Hungary barely edges out Romania in the tomato race, mainly because in Romania they still sell comically misshapen tomatoes that look like Richard Nixon's face covered with tumors, which taste great, but still....

As we've noted before, we still have farmers markets with country folk trucking in small scale produce from family farms to sell, and a lot of them are dipping into organic produce as well. After all, the European Union supports (read "pays for") organic farming and Hungarians like anything that is "supported" even if it means growing outlandish alien vegetables they have no idea how to cook, like napa cabbage and daikon radish. Living in a Judeo-Japanese household in eastern Euope, we go through a lot of daikon and napa cabbage, but we have to ask: what the fuck do Hungarians do with these? I never see any recipes in the foodie media about how to deal with either ingredient, and yet you can buy them everywhere...

Hungarian supermarkets basically stock cabbage, carrots, onions and potatoes, while peppers, tomatoes, and most fruit remain seasonal. When I came here in the late 80s that meant you simply did not get a fresh pepper or tomato between October and June. That has changed - greenhouses and international agribusiness have seen to that - and you can get tomatoes and peppers year round now, but we still have recourse to the farmers markets. This year we have fallen in love with the tart, dark "black tomato" which has become popular. As far as I know, these are either the Dark Crimean variety or the Carolina Black version, both of which are delicious but trigger unfortunate memories of the last USA Presidential election. Sad.

Sure, this has been a simple excuse to post a lot of photos of tomatoes on the blog... it is, after all, cucumber season. And I basically eat a half kilo of tomatoes a day during the summer. But if you have cukes and tomatoes, well, all you need is to make a salad. For that you need olive oil. And we get ours on trips to the south of us: Croatia, Slovenia, or on our latest trip, Montenegrin olive oil bought in the market in Belgrade. Because we need to eat more food that have been grown near the sound of this:

I don't know where you've lived in the US, but in major cities, especially San Francisco, New York, Los Angeles and similar, you can get so-called heirloom tomatoes, which are tomatoes the way they used to be before shelf life became more important than taste. But now that I live in Hungary, I find the store-bought tomatoes ranging from good to pretty awful (in winter), but I have not come across the amazing tomatoes people here tell me used to be available. In fact, I live in a village, Fot, that used to be famous for its tomatoes, but guess what, they don't grow here anymore.

Mate, I've lived in the Balkans, and Hungary is not the Balkans. But I hate to disagree with you, when I really love your blog.

Jersey tomatoes are pretty damn good and there's a farmer in the Berkshires ....

The standard American tomato is bred for shipping without deterioration. Taste is not really a consideration. One can find decent tomatoes in farmers markets here, but they are quite expensive. I lost an argument today at the market, and we came home with the the prettier but blander tomato, in my opinion. But even that tomato might be a cut above.

Morocco grows superb tomatoes. The word organic is not in the Moroccan lexicon, but that's what they are!

Amazing blog and food writing! How come you never visit Sofia in Bulgaria? I wish your blog had a search function like Homesick Texan. I also love Hungarian paprika. Anything you can share on its provenance and your own opinions on it would be much appreciated.