Do Not Take the Salamis of the Hungarians!


June may be the nicest month to be in Budapest, as well as the nicest month to get the heck out of Budapest. And so we are getting out. For one month. To New York. City. Skyscrapers and everything... just like I pictured it... ( click here and go to 4:30 on the video for the reference.) Expect a lot of NYC-centric posts in a short span of time: pastrami porn, Chinese food fetishism, hard core fried fish and wet, juicy clam shots. We are headed to the Kingdom of Chris Christie, the Jabba the Hutt of American Politics, New Jersey, four miles from the Shining City of Light and Goodness and White Castle. I have one month to kill a lot of innocent shellfish and I intend to use it.

On the other hand, no more affordable evening wine in garden bars, no more street cafes, no more... seventh district. For a month, that is. Since moving downtown it has been nice to get out on our bikes and pedal around the park sometime (although living on Klauzal ter means we do have a healthy amount of trees across the street, albeit in a park that reeks of dog poop, but that's what you get for living in the city.) We got to the Budapest Beer Festival last weekend.

Who knew that Hungary had hundreds of craft beer brewers? Who cared? I tried a few and they tasted like.... beer. I am a wine drinker and I drink maybe ten beers a year, mostly in the Czech lands and Germany, where there are no craft breweries because the beer there is already good. But we did try some BBQ pork from the Befalo truck that we spied a few weeks back at the Food Truck festival. This being the first day of the festival, they had already run out of beef, but the swine flesh was divine.

We also hit the Sunday farmer's market at the Szimpla Kert, just down the street from our flat. Hungary's new laws forbid most stores from opening on Sunday, except ones that we don't shop at (noted for their cute alphabetic name) because they donated 1% of their sales money to the Jobbik Party campaign before switching allegiance to victorious FIDESZ after the last campaign. Yes, we used to have to shop at one when we lived in Zuglo, but we always called it "The Nazi Shop." "Honey, I'm going to the Nazi Shop! Need any milk?" But we now have a choice of non-Nazi shops to ply with our custom.


Like I said, I will be flying to New York in a couple of days, so I had to pick up the traditional edible gifts for the old country for my Mom: lekvar and paprika. Yes, I am going back to the USA where we eat... chicken paprikás and mamaliga and spread apricot lekvar over everything. No poppy seed anything after the drug puppies at JFK went nuts over a couple of poppy seed beigli pastries I brought home one Christmas season, causing my luggage to go to baggage jail for observation. 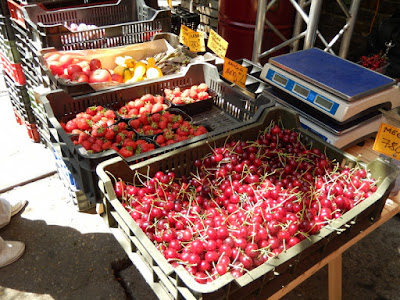 And although I will be in the Land of Okra and Fresh Fish, I will miss some of the goodies we get here in Hungary: fresh cherries and strawberries, tomatoes that are red and edible, tender new cabbages, fresh asparagus, and home smoked salamis.

The whole of Budapest is abuzz with talk of Anthony Bourdain's latest Budapest episode of Parts Unknown. As always, Hungarians love it when somebody notices them, and Bourdain's show ignited the National Atavistic Self-Stimulation Response on a grand scale. News sites analyse the episode, food bloggers follow in the Great Man's footsteps to the Pleh Csarda - a gritty chow barn near where we used to live - and the right wing grumbles that Bourdain found happy Gypsies instead of bemoaning the fate of poor, downtrodden Hungary. If any adjective can describe this particular episode of Tony's work, it would be "nice." Bourdain avoided any controversy, a thing which Hungary manufactures in abundance, and he avoided the tourist cliches that made his trip to Romania a full out disaster.

And he liked the giant shnitzel at the Pleh Csarda, so I will have to make a trip to Hiram's hot dogs in Fort Lee in his honor as soon as I get back to Jersey. And before we pack that last bag, a word for our government: stop making Hungary the embarrassing jackass of the European union with your xenophobic poster campaign. The poster campaign accompanies a long questionaire being sent to every household called the "national consultation" which includes a list of leading questions equivocating immigration with refugee status and terrorism.

The last week has seen these huge ugly anti-foreigner posters going up all over Hungary announcing - in Hungarian, as if Syrian and Libyan refugees made sure to take a course in the language before setting across the border to their target country... "If you come to Hungary do not take the jobs of the Hungarians" or "If you come to Hungary respect our customs!"


Needless to say, Hungary has one of the EU's lowest percentages of foreign residents or refugees, and given the history of Hungary sending refugees abroad, well, it is little surprise that a campaign is going on across the country to deface the posters.

This of course led to a typically Hungarian spy vs. spy situation where the police are sent out to watch for these political defacers and arrest them before they can proudly turn themselves into the police. One photo showed a detective taking samples from a poster for DNA analysis. And then there are the inevitable snarky responses.

I live in New Jersey near the George Washington Bridge. I grew up in Paterson and Clifton and haunt Hot Texas Weiner stands and hole-in-the-wall Chinese places in Chinatown. Every Thursday my old high school and grade school friends get together for lunch. Your kind of places too! When you are in the States, you should come to at least one of our lunches. You are our type of guy and we can learn some new tricks from you; maybe teach you some too. We are hunting around for Hungarian places in Passaic with no luck so far. Maybe you can help. I know you would like to try the Peruvian Chinese places that are around but little known.

Contact me and we could roast and toast you at one of our lunches.