Loeser's Deli: An Old Time Deli in the Bronx. And also White Manna. 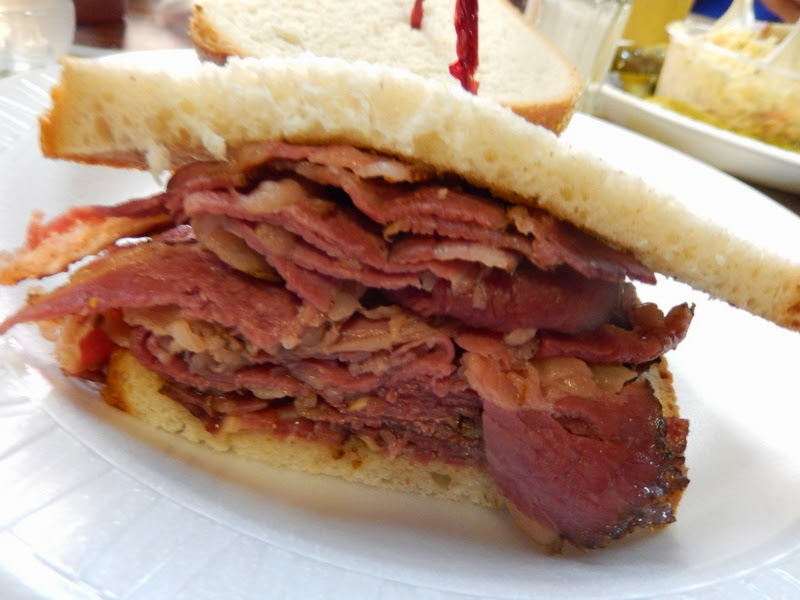 Nakhes fun kinder. Its true. Children are a source of joy, but unlike many other sources of joy they also need to be fed, and at the age of 21 they need to be fed a lot. Heck, you could feed a small army for the same amount that a 21 year boy old can eat. I planned my arrival in the USA to coincide with the last week of my son Aron's visit, and we had made plans to revisit some of the eateries that define Aron, ethnically, as a New Yorker. One of those things is pastrami. Aron loves Jewish food, deli and pastrami in particular. also, in no particular order, Jersey burgers, White Castle sliders, clams on the halfshell, and most Chinese food. Very New Yorker. 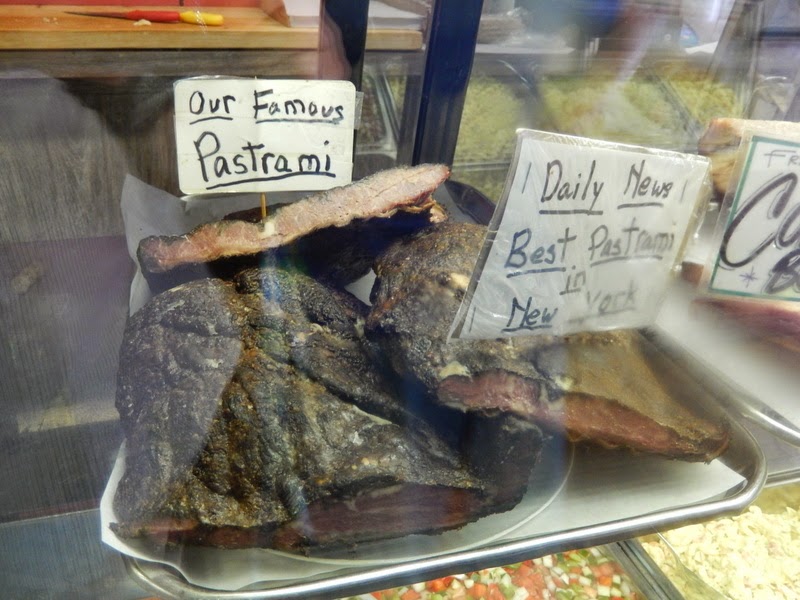 Sure, you can get pastrami in "delis" and diners all over the country, but New York pastrami is special, especially when it is cured and smoked in house. Simple advice: do not ever order a pastrami sandwich in a diner, especially in New Jersey. Just don't. Trust my advice on this. That packaged cold cut of salty, pink hammy stuff covered in peppercorns is not even close to pastrami. When in doubt in a diner always order the cheeseburger or the patty melt. I had read David Saxe's book (and blog) Save the Deli about the gradual disappearance and partial resurrection of the Jewish deli tradition, and there was still one deli I had overlooked: Loeser's in the Bronx.

Half a century ago, way up in the Bronx, a young man of just 17 named Freddy Loeser used some of his bar mitzvah savings to open up a kosher delicatessen. Back then, there were still hundreds of Jewish delis all over the Bronx, Today there are only two: Liebmann's and Loeser's. when I was growing up delis were everywhere, but that everywhere disappeared during the 1960s. In the 1940s New York Public Works commissioner Robert Fucking Moses ran the Cross Bronx expressway straight through the tight knit neighborhoods of the South Bronx, destroying the political power of the ward bosses and the sense of community that held people together. My grandparents lived in Parkchester, a neighborhood that still had Yiddish street signs into the 1960s, and I remember the delicious square potato knishes my Mom would buy for us kids when we went shopping. A knish with yellow mustard was my dream of "eating out." (Although the "Hamburger Express" diner on Westchester Square ran a model train system that delivered your burger to your table by toy train. That kind of thing sticks in your brain forever.)


Loeser's is located on a busy street just across a bridege from Manhatten and has the atmosphere of a real old time deli - which it is. Wooden walls. Formica tables.  My Dad - still chipper at 88 - ran my Son Aron and myself down for an exploration. One thing about Loeser's Deli: it doesn't depend on the tourist trade to stay in Business. Dad declared it a "real deli" and chatted with Freddy Loeser as Freddy came to our table to take orders. "Have I met you before?" Freddy asked my Dad, an ex-NYC cop and detective. "How many years have you been here?" my Dad replies. Freddy says "54 years." "Nah." says my Dad "You're too young.
Freddy disappeared behind the counter and returned with a plate of pickles and a bowl of Loeser's home made cole slaw, prepared fresh daily. I know cole slaw is supposed to be a side, but anybody who eats regularly at delis knows it is actually the appetizer. You shovel the stuff down while waiting for your sandwich or main course, by which point it is gone. Freddy knows this and offers to refill your dish of slaw. And they don't bother with ceramic plates. Paper takes up less space and labor, and since nobody who eats at Loeser's is a tourist, you don't complain.


Loeser's seems to survive on a knish and a prayer, but the NY Daily News declared their pastrami the best in town. Nobody argues with the Daily News. Is it actually the best in town? Hard to say. Loeser's is a classic, machine sliced sandwich, smaller than the gargantuan overstuffed mutants served at Carnegie  Deli or the hand cut piles of meat at Katz's (You think you will be hungry? Order the hand cut french fries. That's what they are for!). For one thing, it is a heck of a lot cheaper than any other deli in the NYC area, because they still serve a diverse Bronx customer base seeking out an affordable, filling, non-Dominican lunch. You can easily get there from Northern Manhatten by hopping on the #7 bus going north on Broadway and getting off at 231th Street soon after the bus crosses the small bridge from Manhattan. Or take the #1 subway from Manhattan and get off at 231st St. stop and walk a half a block. (Loeser's Deli. 214 West 231st St. Bronx.)

Plus there is nothing nicer than dining out with Grandpa and grandson. Three generations of deli fressers passing on the knowledge of what makes a good deli sandwich. The french have wine, the British my know cheese, but we New Yorkers have the deli. We know its nuances, we can describe its aromas and flavors with a subtlety akin to poetry. Pastrami brine flows in our veins, and kasha stuffs the varnishkes of our souls. We New Yorkers are blessed with our delis, and it is our duty to patronize the remaining ones lest they go the way of the buffalo... and egg cream. We also have a few things that more recent emigrants have gifted us with, not the least of which is the Japanese Bakery in Fort Lee. Grandma loves Japanese bakeries. And Grandpa does too.

And then again, when raising a son to be a in a foreign, non-Jersey place, there is The White Manna. I haven't written about White Manna in a while. its nearby, I tend to take it for granted because when in the USA I do most of my market shopping at the amazing Giant Farmer's Market across the street, and the place has been around since as long as my clan has inhabited this part of Jersey, but White Manna has an honored place in the foodie saga of The Garden State. I only wish it could have been kosher so my kosher buddies could try it. But it ain't. All those cheeseburgers? They are mine!

This time we chose my brother Ron to act as accompanying DNA specimen. Uncle Ron is a master of Jersey foods. Hell, with my own naked eyeballs I have seen him eat an entire Subway sandwich and survive, so White manna is definitely a step up for him. He has his own set of boundary issues with food: he likes all food to be pasta. He likes salad to be pasta. Soup made from pasta. He eats meat but often encased in pasta, like Chinese dumplings. He makes a significant exception by eating burgers to broaden his dietary intake of vegetables.

The prices at White Manna have risen slightly since I took these photos, but you get the idea. You order burgers in multiples: two is a snack, a light meal is three, and since this version of "fast food" is prepared as you watch, order four since it will take at least ten minutes to get another one if you change your mind. The tiny-bit-of-meat and large stack of steamed onions is a tradition that goes back to the Great Depression (the 1930s, for those of you who have already forgotten.) Burger shacks needed to find a way to stretch a small amount of meat into a meal, and onion was it. Oklahoma has a similar crushed onion burger tradtion, and the Mississippi slugburger follows in their burger extender vein.

They are good, they are cheap, they are filling, and no, they are not gourmet. those little "sliders" you see advertised on menus at bistros in Brooklyn? I won;t order them, they are not "sliders" they are tiny hamburgers in Yuppie restaurants. A slider has a potato bun, like at White Manna. A slider is slow steamed on top of a stack of onions. A slider has government welfare commodity cheese melted on it. It does not contain jalapeno, unless it is from White Castle (where it is allowed.) Also, a slider is cheap.

The White Manna is tiny and at lunchtime it fills up and gets crowded with people queuing up for take out (orders of "give me twenty hamburgers, fifteen cheeseburgers, and twelve double cheeseburgers" are not uncommon.) If dining at lunch time on a weekday you get a definite vibe of Clowns in a Volkswagen, but heck, it is not Peter Luger's Steakhouse we are tawkin' about, right? It is White Manna, ferchrissakes, and it is part of the Cohen Family Tradition of Eating in New Jersey. 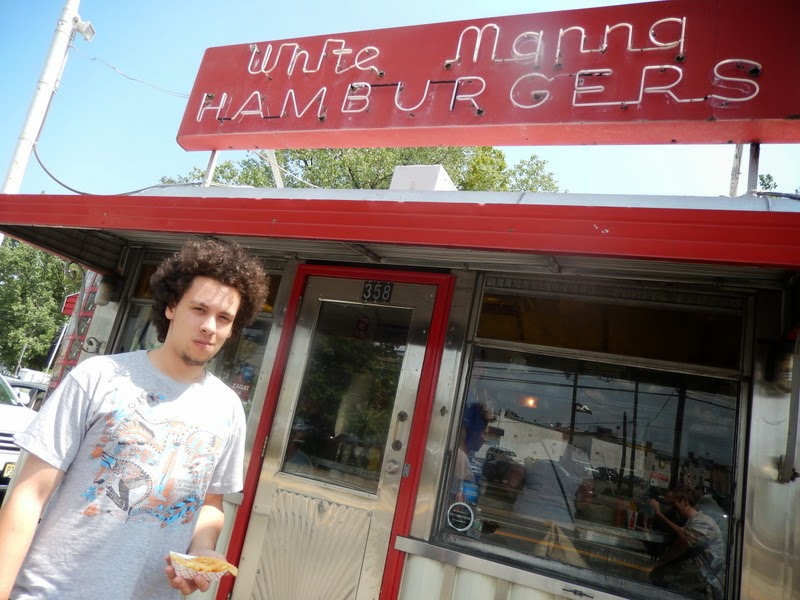