The Silence of the Clams. 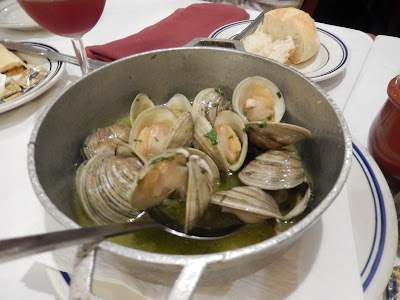 Since arriving in the US I have been on a quest to eat all the things I can never get in East Europe, particularly shellfish. And I have succeeded. Many molluscs have given their lives to satisfy my cravings, many crustaceans have been reduced to their basic amino acids in my digestive system. It's all my karma, I know, and its bad ahimsa for sure, but it tastes good, so what the heck.  A couple of nights ago I we ran down the Jersey Turnpike to the Ironbound neighborhood of Newark, NJ to have dinner at Seabra's Marisqueira, a well known local Portuguese seafood restaurant. I had never been to the predominantly Portuguese and Brazilian Ironbound district before June. I discovered Portuguese food back in 1997 when I did a month long tour in Portugal and decided that the cuisine there was on a par with the best in Northern Italy or Southern France. Seabra's lived up to that reputation.

Great food summary Bob! I didn't know any of these places in DC.

I'm a registered republican who will never eat lobster because of inhumane treatment and the way they are cooked. Glad your brother chose the knockout method.

Same with crabs. I worked in the kitchen of a restaurant chain when I was a teenager and the way these 2 animals were treated were pretty messed up.