Budapest: The Hunt for Chinese Noodles.

Laziness. Procrastination. Call it what you will, I am guilty of it. This is the slowest summer that this blog has seen. I haven’t been posting because of… well, not much has been happening. Or a lot has that I don’t write about. Like writing, which is how the rent gets paid. I've been working on some contract writing this summer while trying to at least research some articles for paying publication, and the next thing you know – our lonely blog finds itself neglected, cast aside, forlorn, bereft of zingy little updates from the far corners of East Europe. Well, we haven’t been traveling as much this summer either. Fumie calls it our first “stay-cation" in Hungary, and it hasn’t been at all unpleasant. We’ve had a lot of visitors (Lemme hear you say YO! to the Cluj posse!) and endured the hottest summer in years without air conditioning, but we made it. My old bicycle – a half ton of ancient hardware nicknamed “the Maschina” by the local bike shop – was stolen from our building’s back yard in early July. 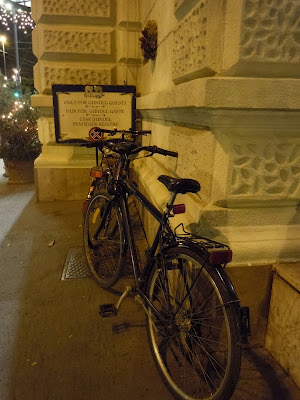 I had this bike - an old junker rebuilt by a bike messenger friend - for almost a decade and it was nearly indestructable. Perfect for Budapest's streets. It was so unspeakably ugly that I had actually seen bike thieves look at it and walk away. But bike theft is big business and Budapest is not immune. Most bikes are broken down and the parts shipped out to the third world where bikes are what the car is to the first world. Thieves strolled into the building yard and wire clippped through the cable lock that had worked for so many years. I will miss the Maschina, but it has finally been replaced by the hybrid trek bike of my dreams from Bikebase in Budapest. 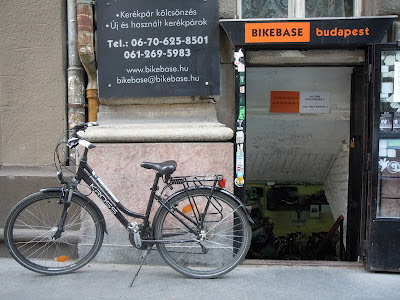 I can now cruise Budapest shifting gears to my heart’s content. And yes – Budapest has some funky corners that even locals know virtually nothing about. I have written about the sprawling Four Tigers Chinese Market years ago. It is a world unto itself, part souk, part suburb of Beijing, hardly regulated by any local Hungarian law, but nevertheless it is an orderly place following its own rules. It is where all of the small shop owners of East Europe go to buy cheap underwear, discount toys, bad fishing equipment, cheap DVDs, and odd plastic hair clips and where Fumie and I go to find decent cheap Chinese and Vietnamese food hidden within the alleys and warrens of the back rows. Usually we go to the Vietnamese vegetable markets where you can get the cheapest frozen shrimp (Big frozen shrimp) and squid in Budapest, alongside Asian greens, sauces, rice noodles, and fish sauce. 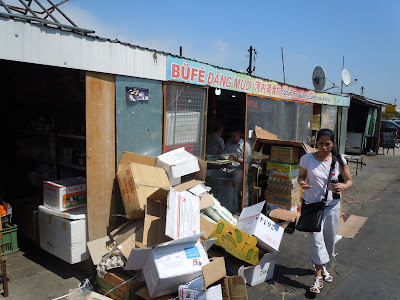 The Dang Muoi Bufe and Asian market is here (I will deal at length with the Dang Muoi Bufe in a separate post. It serves Vietnamese food - a world class noodle cuisine all on its own right - and deserves some in depth attention.) which I have noted is the Best Restaurant in Budapest. Sure it may not lok like much, but the food is the best deal in town. Located inside a small Vietnamese food market, they serve some of the most authentic Vietnamese lunches in Europe on picnic tables located inside the shop. Friends (the Cluj/Kolozsvar posse again) pester me to take them there, and nobody goes home unimpressed. They make not only the classic Vietnamese Soup of The Heavens Pho (Pho bo, beef, and pho ga chicken) but about a dozen other great Viet meals in a bowl of broth as well, like the excellent spicy bún bò Huế. 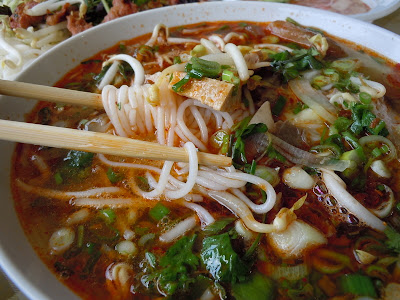 If you are from Budapest, however, go find it yourself. (Back of the retail side of the market from the middle entrance, called gate 3 – across Kobanyai ut) The Four Tigers Market is merely the retail face of a whole world of Chinese business activity. On the other side of Kobanyai ut are a series of huge, dilapidated old warehouses and factories that have gradually been transformed into business centers called things like “Asia Center” or “Europa Center.” Set aside for large scale wholesale distribution, these shops are rarely visited by people strolling for bargains – they don’t sell single items. Trucks and vans with lisence plates from Romania, Poland, and Serbia load up on goods as porters wheel around on odd looking Chinese motorcycle trucks. 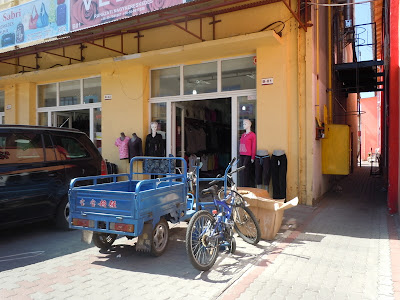 But if you go into the back nobody stops you from browsing. Hell, nobody even notices you. Which is good, because signs at the entrances – manned by beefy Hungarian “secuity” guards with tattoos and shaved heads – expressly forbid photography, and if you are lucky a shop keeper may warn you about the rule before the security goons confiscate your camera. Of course, we have been coming here for years so we are experts at surreptitious photography. The best way to cruise around this teeming urban market landscape in seeming invisibility is simply to ride a bicycle through it. 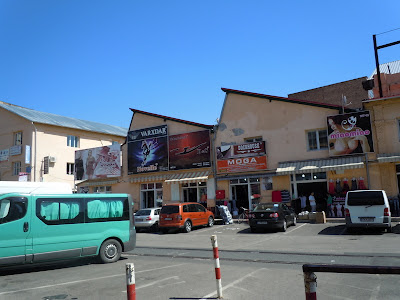 It is, basically, an industrial suburb of some Chinese city, so everybody gets around on bikes. Some parts of the market are fashioned into malls, some parts look like Turkish shopping centers, and bikes are parked everywhere. You can, literally, ride your bike through the malls. Everybody does, and nobody seems to be bothered by it. Different rules apply here. The streets back here are named “Shanghai ut” and “Wenzhou ut” and “Kinai ut.” As if you need to be reminded. We were here cruising for lunch, and we found it hidden among the kolbasz stands and trucks serving regional fried bread things from China. 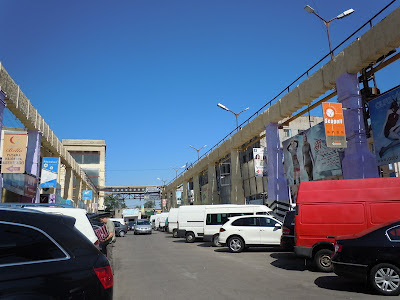 When we were here a few weeks ago exploring with my old friend Rick and his wife, Xioarong (who is a sophisticated Szechuan woman) we came across a small lunch place advertising itself in Chinese as “Lunch. Shan.” Xiaorong poked her head in the doorway and asked the family there what kind of food they served. "Food from Shan county in Fujien province." 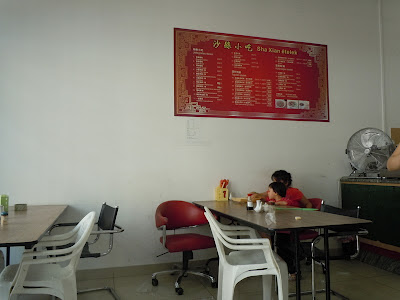 If you ever ate around East Broadway in Manhatten's Chinatown - noodle soups and spicy fish at rock bottom prices - you will understand our addiction to Fujienese cuisine. But here? In the Budapest wholesale market? It was a bit early, and we had already eaten our breakfast soup at the Dang Muoi across the street, so we took note of the place and made a mental promise to return. A couple of tables, a cash register, and a family making dumplings. What more could you ask for? This time Fumie and I went straight for it (address: K-8. Apparently, the buildings are named K, D, B, etc. Live and learn, right?) 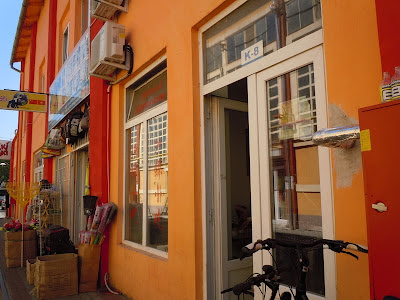 We walked in, checked out the menu. Noodles. Soups. Dumplings. Nobody spoke much Hungarian or English. Excellent! The partons took no notice of us at all and all chatted in Chinese. the market is full of wei lo folks from Hungary and Romania, porters and workers and buyers who have picked up a taste for Chinese lunch - and even some who have learned to speak Chinese as well. Fumie pointed at the steam dish full of dumplings and expertly miscommunicated enough to get a dozen for FT 800. I simply said “Give me something good” And presto! 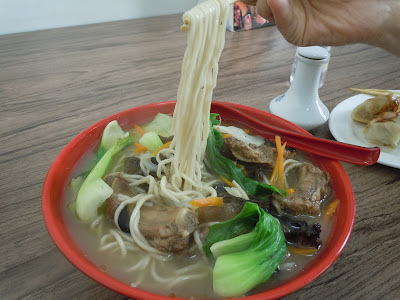 Out comes a bowl of some of the best Chinese noodle soup with pork ribs and vegetables this side of the Danube. This is a real winner - a deep delicious broth with real Chinese noodles, not the spaghetti some places use as a substitute. Sometimes there is nothing that beats a good Chinese noodle soup. I grew up with them as the cheapest good meal you could get in New York. The lack of chinese noodle soups used to be one of my biggest complaints about living in Budapest, but with a bit of faith, perseverance, and the world's fastest growing economy, Chinese noodles have come to me. 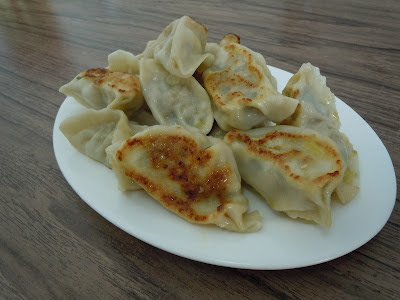 And dumplings. these were hand made, filled with meat that may have come from some kind of animal and oddly, carrots. Served with soy sauce and vinegar. They made Tokyo born Fumie happy, as did half of my soup. If Budapest ever gets a decent Japanese ramen noodle shop, these soup stands in the market may get a run for their money, but until then, they are safe. Now when the weather gets a bit colder and we need something more substantial, there are the traditional hand pulled Langzhou noodles you can find in another Chinese soup joint in a different part of the wholesale side of the street market. 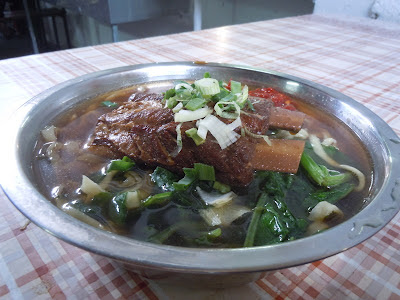 This is an unnammed hole in the wall lunch spot with one table located in a warehouse across the street from the main gate of the Four Tigers Market. This little unmarked hole in the wall is run by folks who really don't care about anything except perfect noodles - atmosphere? Service? Nope. Just noodles. Tell me: is this not the most evocative bistro in all of Budapest? No? Well, they may well serve the best soup in town. 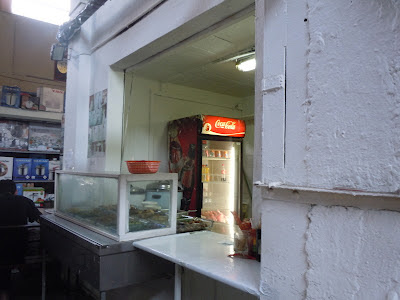 Service with a smile? Who needs all that extra stuff. They stretch the noodles by hand. If you want them, you will sit at a cramped picnic bench beneath a warehouse of cardboard crates and enjoy it anyway. To find it go to the doorway below the sign that says "Kapu" (gate) behind the sign that says "CHANGE" next to the Rong Rong market vegetable market, which is now just a guy hawking bitter melons and bok choy from boxes on the street. Its on your left about 25 meters before you get to the Hungarian sandwich/lunch stand where all the Romanian Gypsies and Syrian moneychangers hang out. Bon Appetit! 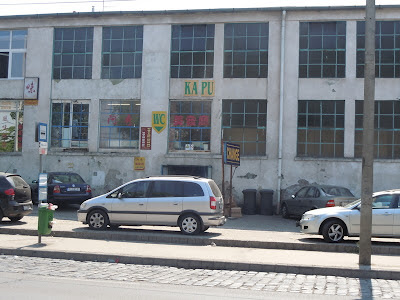 What's your take on Gundel? A friend who had dinner
there earlier this year thought the place had no real
class as they seated T-shirt wearing Russian tourists
in the main dining room. But, then again, she's a bit of
a princess so I'm not sure what to believe. She said the
food was simply ok.
John Reynolds

Brilliant post, a whole new Budapest is about to open up for us.
To commenter no. 1, it's none of my business, since you're not asking me, but I don't like Gundel - expensive plus dull sort of slightly airline food.

My opinion about Gundel - and I have been inside the kitchens once doing a magazine piece - is answered in my first foto: my old bike parked in front of the Gundel waiting for my friends from NY to come outside after their mediocre $175 meal. Russian tourists are just about the only people left who can be duped into a meal at Gundel. You want chicken paprikas? Try Kadar Etkezde. Great bicycle parking spot, though.

Wow! This post more than makes up for the wait. Can't wait to try these places out.

Sorry to hear about your bike. So much for the lower-than-most buglary rate in Zugló.

One question: Talking of noodles, what is your take on Momotaro?