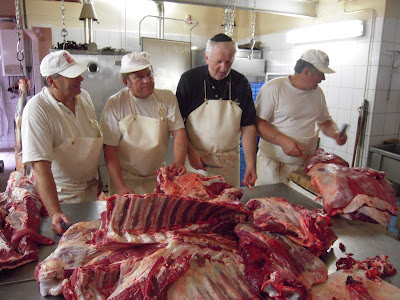 I’ve been a fan of the blog “Save the Deli” for years. Writer David Sax followed the decline and revival of delicatessen food for several years while researching his book Save the Deli. A couple of years ago I got an email from David asking for some assistance on a story he was writing for Saveur Magazine on the roots of Jewsh deli food in east Europe. I was happy to help out. Part of my participation was arranging to spend a day at the Budapest’s kosher butchers at the Kovari Dezso Meat shop, attached to the Orthodox Synagogue on Kazinczy utca in the 7thdistrict “Ghetto” district of Pest. We needed permission so I set up a visit with the rabbi of the local Orthodox Synagogue community on Kazinczy utca. Budapest is one of the few places left in east Europe with a real, fully functioning kosher butcher. 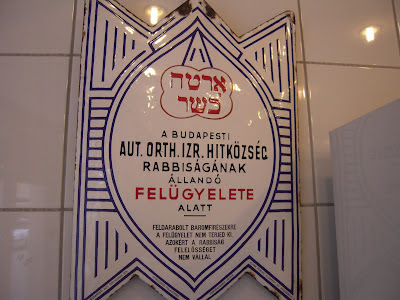 If any place is going to support a real Jewish community, then that place needs to have a good kosher butcher. Eating kosher food is so central to Jewish identity that even secular Jews like myself feel a lot more comfortable knowing that observant Jews can maintain the basic laws that underpin their religious commitment. Eating kosher is all about commitment: you can’t just eat partially kosher. I know a lot of people who avoid pork, or who do not mix meat and milk, or who are “New York”” kosher until they hit a nice plate of take out Chinese food. I have no problems with the shrimp fried noodles or with cheeseburgers, but I find it comforting to know that when the Great Wall of Baal Tsuvah arises on the horizon, there will be an all-beef hot dog waiting for me. 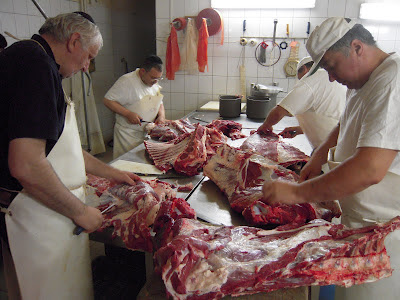 The butcher shop is located on Dob utca in the Jewish Ghetto of the 7th district in downtown Budapest. With us was David’s photographer, Landon Nordeman, who knows a thing or three about photographing food (see his photos in the Saveur layout) so part of our mission was to document the processing of meat into kosher sausages and salami. We were there early to await the delivery of the quarter sides of beef from the slaughterhouse. In order to be kosher the animals must be killed by a ritual slaughterer, called the shoychet in Yiddish,who uses a special knife that must be ritually sharpened in order that the animal dies as quickly and painlessly as possible. 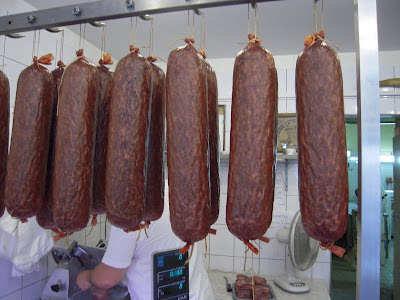 The shoychet works on site at the cattle yard. Once the meat is delivered the two mashgiachs (kosher butchers) lead a team of trained butchers in taking the animal apart and stripping the layers of unkosher fat and membrane from the carcass. The presence of trained, religious butchers is one of the keys that define how kosher the final product is: it has to be handled by Jews who are kosher themselves. This is locavore cuisine at its best. You want garlic flavor in your salami? No artificial garlic powder here. Hand clean and crush garlic. 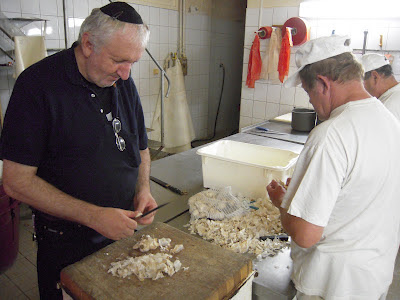 The end result is some pretty fine sausages, cold cuts, and salamis. I sometimes drop in to buy the kosher frankfurters, simply because being a New Yorker I have to have a hefty beef frank to register “hot dog!” in my brain, and in Hungary beef never gets near the hot dog recipe. The salamis are hung to dry on Tuesdays, and ideally should hang a week to be ready, but they never last that long. 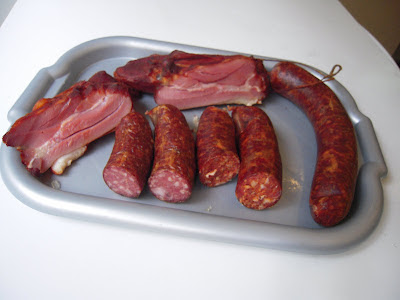 A steady stream of orthodox Jewish travelers, visitors from Israel, and tourists buy the shop out by Friday. If you have ever traveled around Europe with somebody who maintains Jewish dietary laws, you know the drill. They live on canned food, kosher junk food from bags, cookies, hard boiled eggs, and vegan pizza until you come within an hour’s drive of a kosher butcher shop. Then they stock up on smoked sausages, salamis, packed smoked turkey wings. 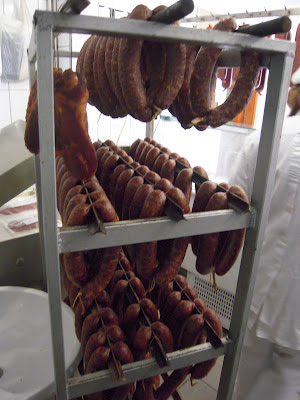 Most of the Dob utca’s customers buy several days worth of cold cuts at a time, packed in cryovac plastic for takeaway. In fact, when I had some Israeli friends living in Budapest they used to sing the praises of our butcher shop for the simple reason that they could buy fresh meat there – most of what they bought in Israel was kosher meat frozen and shipped in from Argentina and the USA.
Posted by dumneazu at 8:06 AM

In the EU, the European Convention for the Protection of Animals for Slaughter, requires stunning before slaughter!

I think it is very far kosher.
I don't think anything can be that clean as it written. Only vegetables and some fish mostly raw food. I'm in the process of converting to a new diet.
Mostly because I have rencetly seen the documentary Earthlings.

I never truly understood this: How is the "back and forth" slicking of the neck any less cruel to the animal than a single instant chopping of the head or an instant spike to the brain, as is common in the Sikh way of slaughtering the animal (jhatka)? I would think that with the kosher method of slaughter, the animal takes longer to die and suffers more.

That is, if the minimal suffering of the animal is the true objective here.

kathy said...
This comment has been removed by a blog administrator.
12:05 AM

I think its more tradition than anything else,

Vegetarianism would be the real way to avoid the suffering of the animal:)

@Andorka: Although I am not a vegetarian, as far as my beliefs go, respect/love for animals is the only valid reason for being a vegetarian (health "reasons" are b.s.), and I salute that lifestyle.

I just started a blog called Freud's Butcher -- because that's what my great uncle in Vienna was -- and I'm very interested in writings about kosher meat practices is Europe, historical and current. I found this post fascinating and wanted to contact you directly to follow up but could not find an email address on this blog. So would you please contact me?

Great to know there are places that care about our traditions and believes.

EU? None of their business