Brussels: An Unexpected Afternoon in the Land of the Belgamorphs. 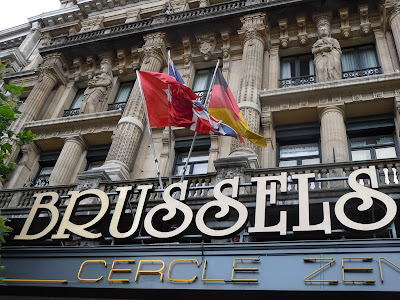 We’ve been home in Budapest for two weeks already, and I haven’t posted anything due to work and the general acclimatization of being “home.” Having been on the road almost constantly since May, “home” is a relative construction, which now settles down to a winter here in Hungary. Getting here, however, was not as easy as hopping on a plane Newark, watching a few episodes of the Simpsons, and calling a taxi. We flew with Continental Airlines, whose equal opportunity policies are enthusiastically offered to crackheads, and so we arrived in the morning in Brussels two hours late for our connecting flight. 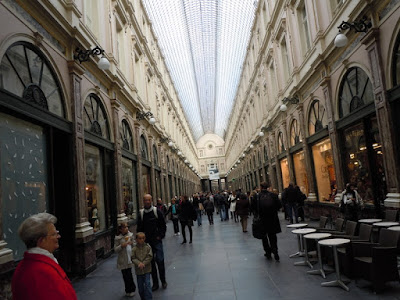 After an hour of sorting out our tickets (this is where our conviction of a crack problem at Continental stems from – their staff never informed our connecting flight on Malev of our transfer. Thanks to the kind folks at Brussels Air we got on the flight and got home late at night.) But that meant that we had seven hours of hang time, and Brussels is only a twenty minute metro ride from the airport, so it was off to… Chocolate City for the day! No sooner did we enter the metro than the unique Belgian approach to languages was made apparent. 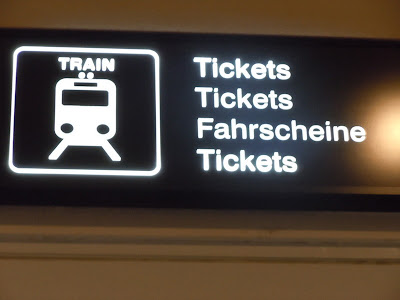 Brussels is an officially French speaking zone, but it is an island surrounded by Flemish speakers. The two language communities have never actually melded into one national entity. While I have been to Belgium many times (on tour with my band) I have never been to Brussels, only to smaller towns and a festival on the French border where the back stage spoke French and the main stages spoke Flemish and never the two did meet. It is like a microcosm of the Balkans, but with strawberry waffles and Zairean immigrants, and not as talented on brass instruments. And chocolate. Lots of chocolate. 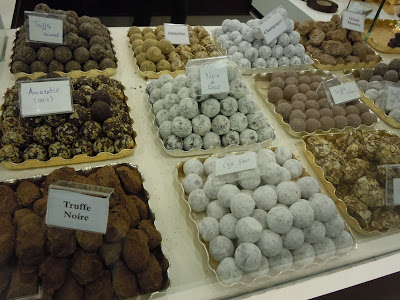 And short of Continental Air staff and their expertly utilized crack pipes I would never have gotten to see it. Brussels is overwhelmingly cute. It is tourist heaven. It outdoes Paris in terms of mega-touristy cuteness and crowds of EU package tourists mob the downtown. And so we joined them. The first thing you notice is the chocolate shops. 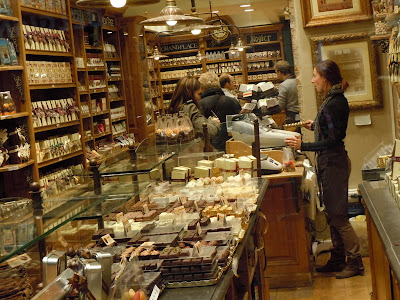 Belgium is one of the few places in Europe where you can find seriously fat people. I mean obese, waddling, get-me-to-the-liposuctors Belgomorphs who could give a Nebraska volunteer fire department a run for their money at a Big and Large Clothing store. They dine on excellent beer, French fried pommes frites slathered in mayonnaise and… chocolate. 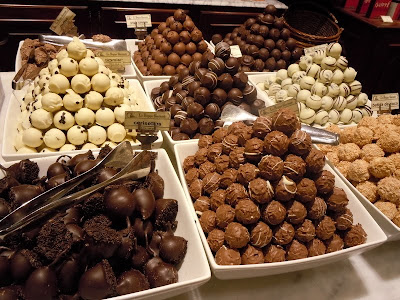 It is one of the few places in Europe where I can walk the streets feeling confidently svelte. So, no, I passed on the mayo and frites. In fact, I passed on the mussels in wine and cream… I passed on the steak frites… been there, done that. What I wanted was… Chinese food. I didn’t know this until we suddenly hit Brussel’s Chinatown, which is located just on the outskirts of the Downtown towards the fish market. 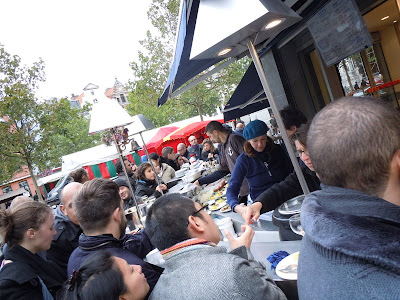 On a Saturday afternoon the outdoor fish market area is crowded with people tossing back seafood with a glass of wine or beer. What caught my eye was the Dutch new herring offered on special by one Spanish run tapas fish bar. Hollandse nieuwe herring are fresh herrings that are merely gutted, boned and lightly brined and served as with a side of chopped onions. You eat them fresh as can be, which is why most people outside of the low countries have never tasted them, and won’t. 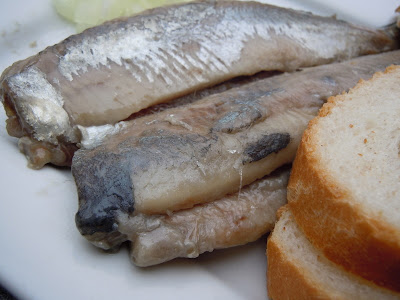 They don’t travel. They are also about the best fish I have ever tasted, and Fumie – who knows her raw fish – promptly ate her way through both our portions and ducked into the fish shop to buy out the remaining stock of new herring for her dinner. 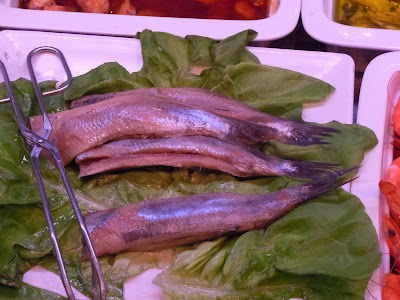 Happy, but not stuffed, we continued down the street and checked out the Chinese restaurants. They were all full. Belgians, maybe even more than the French, are fanatic foodies, and dine out more than any other people in the EU. Finally we settled on a Langzhou noodle shop, serving hand rolled artisanal noodles in beef soup. 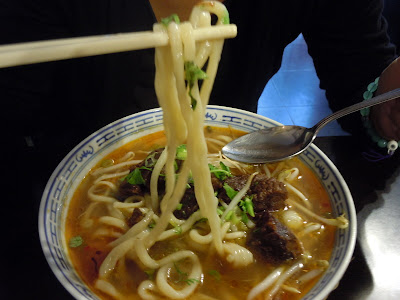 We weren’t looking forward to our meal on Malev (which in Europe usually means usually a hermetically sealed pseudo-sandwich and a turo rudi chocolate bar) so we had to fill up on Chinese food while we still could. Note to Budapest friends: yes, there is Chinese food in Hungary. But with the exception of Master Wang’s, it just is not that good. Don’t argue with us. We travel the world researching this issue. I once spent ten days in Paris eating only Chinese food, so I should know. 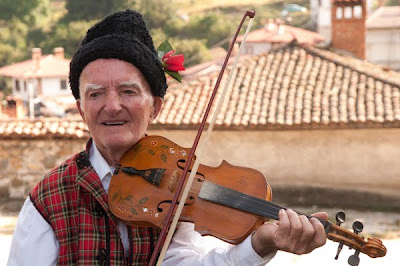 Now that we are back in Budapest, I will try and update more often – I replaced the digital camera I lost in the Great Istanbul Robbery and will probably post a few more entires about our summer travels now that I have access to Fumie’s pictures from Bulgaria and Turkey. And a lot of the research we did on comparative Jewish salted meats... and an amazing seafood place we found in New Jersey. Oh... the tales I could tell! 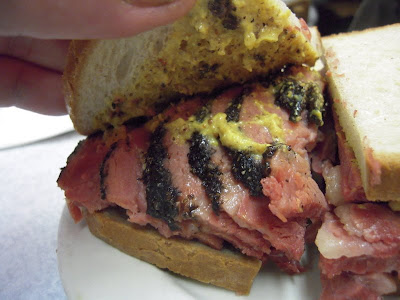 We arrived in Hungary this year at a surprisingly exciting time. Just as the world turned its attention to the devastating toxic sludge flood in western Hungary, our new Government has been… pushing for new political and economic policies that – I swear – sound like they were inspired by reading bottles of Dr. Bronner’s soap. For years now I’ve been of the opinion that much of post 1989 Hungarian politics has been formulated by people shampooing with Dr. Bronner’s, and now I am convinced. All One! All One! This will get interesting. It will indeed. Stay tuned. 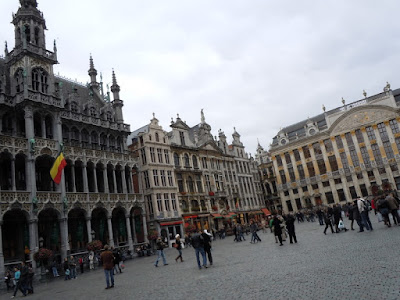 is the seafood place in NJ by any chance the Seafood Gourmet in Maywood? that was one of my favorite places to go when I was in NJ for grad school.

"The two language communities have never actually melded into one national entity." Your mastery of under-statement is second to none

I'm a Fleming, and enchanted by your description.

Brussels is however not officially French-speaking, but a common ground, with the largest minority speaking French and the second-largest speaking Arab (and a third Turkish, and a fourth Dutch/Flemish, so there's no lingual majority). I could try to explain that thing about language communities (Fr/Fl/Ger) and regional territories (Wall/Fl/Brussels), but it all makes it more Balkanish. Suffice to say that we're trying to form a government since June (no success) and that it's all very non-violent.

We have a steady influx of Hungarian/Romanian street musicians as well, given the heavy (sic) emphasis on tourism you described. I've seen more Vioare cu Goarna here in my home town of Bruges, than I've met in the whole of Bihor.

Haha. I am a French (and Yiddish) speaking Brussels inhabitant and I can say you that the "version" of Ludasi Karcsi is the main version of Flemish political parties about Brussels with the big deal to deny the fact that Brussels is globally a French speaking city. The city is officially two-languages speaking. The lingua franca is French. About 90% of the population is registered as French speaking and send his children in French schools, high-schools, universities. It's however true that immigrants or children of immigrants do not have the same link to the country than the "original" Belgian.
Speaking of French as the language of a minority... everybody who can walk on the streets would understand that's not accurate. I never speak Flemish on the street, in stores, only French and I live in a Turkish/Moroccan area.

Oops, no intention of highjacking this comment thread. Motl's right that French certainly is the common language in Brussels, but it's not one majority's mother tongue. The 90% is easily explained as Maroccan, Tarifit or Turkish aren't official boxes to check.

In Marosvasarhely the colour of my jacket seemed to change the language cashiers used to talk to me: green meant I probably was Hungarian-speaking, black or yellow meant Romanian. I didn't have enough jackets to try the other colours.

Obese people in Belgium? Uh, yes but not more than in the rest of Europe!