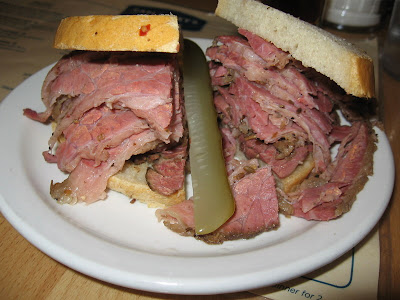 It hasn't been all that long a time since I was sitting on the roof of our flat in Istanbul mourning the loss of my laptop. Since then I have moved on... to New York via Canada. It has been a week of jet lag, long and loud jams, and smoked meat sandwiches with some of the best musicians in the Klezmer scene. I'm exhausted. For access to the computer world that we all know and love, in front of me is a tiny computer. I was given a "net book" - sort of the pygmy monkey of the laptop family - and it is tiny and occasionally annoying. It is like typing on a paperback book sized keyboard with a 10” screen, but for the time being it is what I have to use. I just spent last weekend at the Ashkenaz festival in Toronto. 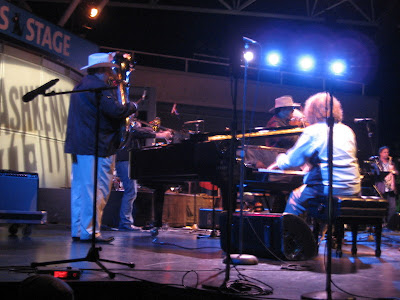 Ashkenaz is held at the Toronto Harbourfront Center, a pleasant stretch of Lake Ontario dedicated to events celebrating Canada's diverse patchwork of cultures that hosts a series of ethnic festivals each summer culminating in this huge Klez-ma-thon of Jewish culture. Canada's Jews are quite diverse in themselves, and it would be misleading to characterize the festival as one of simply Yiddish culture – although it is one of the most Yiddish festivals around on the klezmer circuit – because of the strong presence of Canada's large Sephardic and Mizrachi Jewish communities. Chickpeas and bourekas (the Israeli/Turkish Sephardic bureks that have become one of Canada's main snack pastries) far outnumbered Ashkenazic foods, but I finally got a chance to taste Canada's version of pastrami – smoked meat. And I can say that while different, it is good. Very good. 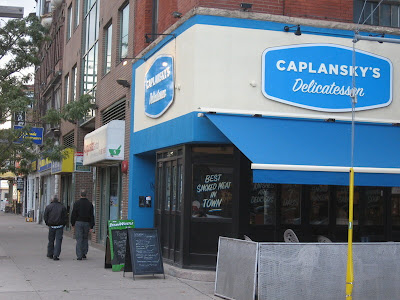 I started at Caplansky's on College avenue in the company of my old friend... let's call him... Walter... AKA Marshall Tito and his family. Marshall Tito had a brisket and smoked meat combo, which may be the only possible improvement imaginable. Later at the festival site, we discovered that Caplansky's was a festival sponsor and had a stand in the food tent, further narrowing any decision I could make as to what to eat. Caplansky's is described at length in David Sax's must-read encyclopaedic examination of the world of the delicatessen Save The Deli, and it is a modern, hip answer to the deli of old. I ordered the $11 (Canadian loonie) smoked meat sandwich with fries and the sandwich arrived surprisingly smaller than those parodic NYC pastrami towers, but all in all, just about the right portion to eat without waste. 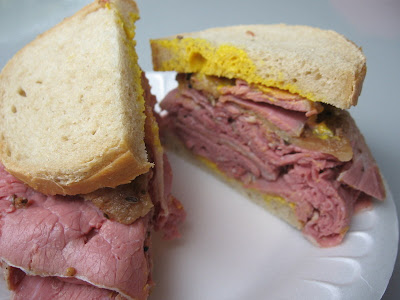 It isn't pastrami or corned beef at all, but somehow manages to make a third way in between the two noble deli meats and carve out a niche and identity for itself. Less processed than either pastrami or corned beef, more like a cross between pastrami and rare roast beef. And there is Caplansky's pulled brisket sandwich... which is a protein-pcaked ode to the joys of slathered mustard on cheap belly meat. 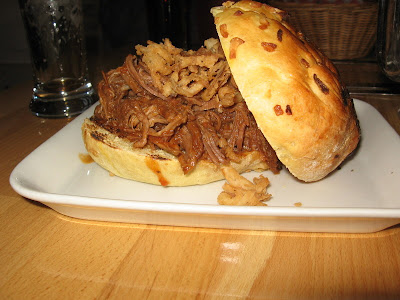 If I had these in New York I would be in utter confusion about which to order – as it is I usually jump between my beloved pastrami and my old friend corned beef, but these would leave me in utter confusion. With luck... not promising anything yet... there is a chance I may go to Montreal next week in which case I will get a chance to sample the legendary Chez Schwartz' smoked meat sandwich. More on that later. If you had to visit only one Jewish cultural festival a year... Ashkenaz would be it. 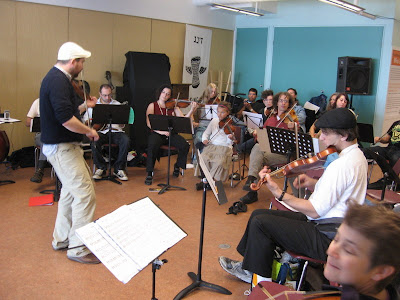 Unlike festivals in Europe, Ashkenaz not only features concerts, but workshops, lectures, events for kids, and more all compactly located on the shore of beautiful Lake Ontario. For the participants, its a chance to get together and meet old friends and hang out and play together. I was there alone, but I also sat in on Alan Bern's Other Europeans panel and played in a variety of bands for dancing. 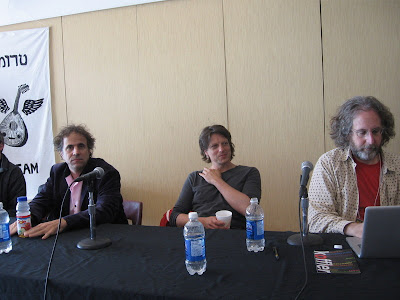 I met old friends like best-selling author Michael Wex, who was flogging his new novel The Frumkiss Family Business, and his wife Marilla,British born stand up comic and all around whirlwind who wore a participant's ID identifying her as “Wife of Wex.” 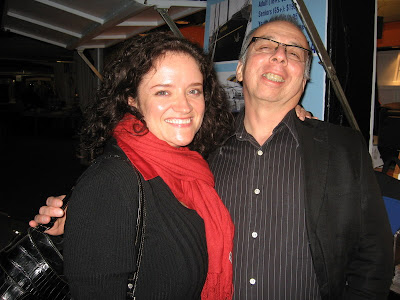 Mark Rubin – about one third lighter and more compact than the last time I saw him – was on hand for blues fiddle jamming. My old buddies from Vancouver via Maramures, Geoff Berner, Wayne and Dione were in on Monday and we had a klezmer musician vodka and smoked meat sandwich party to end our festival. 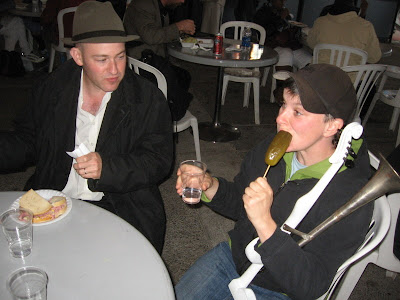 At my age one is not supposed to have this much fun. Thanks to Erik and all the Ashkenaz organizers (Ilana... I'm talkin' bout you!) for a great weekend. And don't worry - after our north American travels I should have some more details about what we did in Istanbul, as soon as the ophotos I lost in the Great Laptop Robbery of 2010 are replaced by even better photos of the same shots. Until then, the midnight "Quiet Dance" wiith Pete Rushevsky and Steven Greenman (Di Tsvey) along with Mike Winograd and Amir and others, led by Steve Weintraub on the shores of Lake Ontario .
Posted by dumneazu at 8:42 AM

Pleased to hear that you may be coming to Montreal. If you do make it, please call me up (514 499-2809).
I'd like to introduce you to some great musician friends who could connect you to the local scene, both Klezmer and otherwise.
Kalman

First, please don't refer to Toronto and Montreal smoked meat as if they were the same thing. They aren't.

One (Toronto smoked meat) is a pale, imported imitation of the other (Montreal smoked meat).

I love Toronto. I lived there for years. I have family there. But I was born and raised in Montreal, and if I had to choose between the smoked delicacies from those two towns, all you'd see of me would be the dust trail I'd leave as I headed for Schwartz's.

Second, maybe try Snowdon Deli if you have a chance. It's not better than Schwartz's, but it's at least as good. And different, too.

(See here for a comparison, and some other Jewish food suggestions while you're in Montreal: http://www.forward.com/articles/9975/).

How does it compare to salt beef from the beigel places on Brick Lane in London?