One of the harder things to bear if you live a traveling life is that when something happens back at “home” you are not there. In fact, I am almost never at “home” – in Budapest, in New York, or wherever my backpack is parked, “home” is more of a state of mind. But someplace out there one has family who keep track of you and whom you love and tend to take for granted as a constant. And now one of my constants is gone. Since I arrived in Istanbul I received the news that my brother in law, Alec Wittek, passed away suddenly in New York at the age of 59. My family in the USA immediately rallied to my sister’s side, but I had to deal with the tragedy from afar, via email and skype. 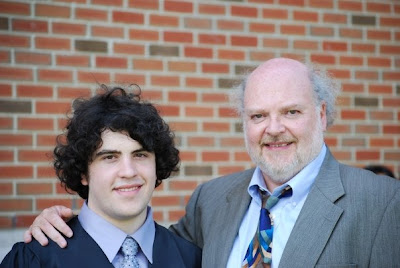 Alec was a patient and loving father, a good husband to my sister, a son to my parents, uno amigo para todos, and – like me – a Yiddish language loving fisherman. He and I spent hours at the seaside in Delaware (or “Delfer” as it is called in Yiddish) not catching fish while chatting about how stupid President Bush was in in broad Galizianer Yiddish. Fish were not important. Friendship was. Alec was one of the last of the generation of Brooklyn Jews who really understood and cared about the old time Yiddish aesthetic, like a living bridge between the 1920s and the 2000s, and he was one of the only guys in my family who really understood what exactly it is that I am doing with old style Yiddish music and why. Alec was what we call a mensch. I will miss him, not the least because he was one of the two Yids (“yud’ yud”) that I could make a l’chayim with who understood the irony – it takes two yids (the Hebrew alphabet for “yah” and “weh”) to make the name of God. Now half my l’chaim is gone. My sister is in mourning, but my nephew Max has really stepped up to take the man’s role in the family, and … sin nuestra hermana Mexicana, no podríamos manejar todo el esto. 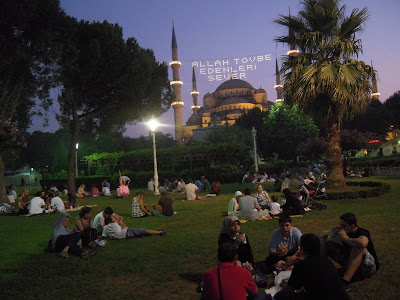 If I were anywhere else in the world – including Budapest – at a time like this I would feel terribly alienated, alone, and simply wrong for being away from home. But not here, at least, and not now. I am in Istanbul, Turkey during Ramadan. All around me people are fasting during the sweltering and long summer days without complaint and waiting for that moment after 8 pm when they can indulge in the pleasure of life for a night before taking on their fast again. All around me people are focused on the value of their lives. I scratch through the language barriers and talk to them in a mix of my terrible Turkish or their fluent English, which so many speak. I am surrounded by people in a state of contemplative grace, people spending a fasting month considering the worth of their lives and their moral values and personal responsibilities. I sometimes ask the local people how it is during their fast, and what it means to them. And every person so far has taken the time to answer carefully that it is hard but good. Like life. “We are people. We can do this.” It makes me grateful to be where I am at a time when my family has experienced a loss. During Ramadan nobody feels alone. 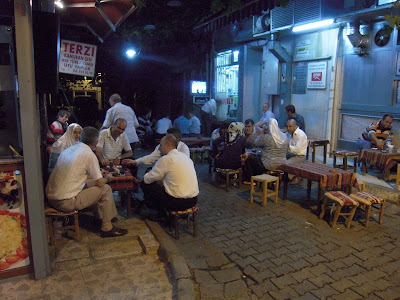 This evening Fumie and I decided to venture into the staunchly Islamic conservative neighborhood of Fatih to experience the ending of the fast and the iftar feast which follows. We went to the Siirt Bazar Market, which is the center of a community of internal immigrants from the area of Southern Turkey bordering on Syria, and Arabic is heard in the Market as often as Turkish. Outside the market the Fatih Municipal city council had set up a free feast tent for those who had no money for the feast. Of course, while taking photos we were invited to take part. 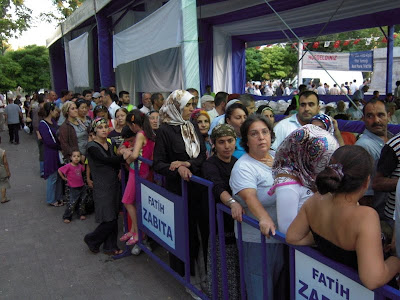 But we want the amazing roast lamb that is sold by about a dozen Siirt “Buryan Kebab” restaurants located around the market. We sat down at one about fifteen minutes before the final call from the Mosque ending the fast. All around us people were fiddling with their food – squeezing water bottles, playing with salads. Each restaurant sets out the tables in a pre set iftar feast, just ready for the minute when the faithful can finally break their fast. 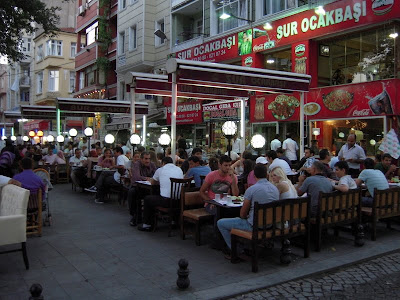 And just about 8:10 pm, in the middle of the call… everybody simultaneously peeled open their plastic cups of water and drank… and drank… and drank. Cig kebabs (raw spiced lamb wrapped in lettuce) were popped into mouths, chilled salty iced yoghurt ayran was drunk… cigarettes were lit. Life begins again. 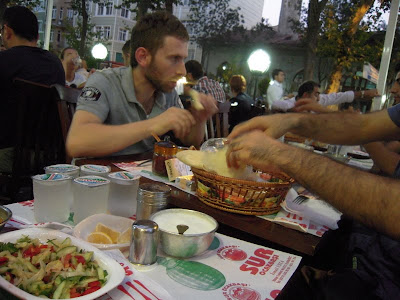 Afterwards we sat in the tea tent and listened to an ashik play the saz and sing Anatolian songs of devotion. I could not ask for a more proper atmosphere than the one I am in now to contemplate the passing of my brother in law. It makes me grateful to the people opf Turkey that they can welcome us during the month of their fast in such a warm and accepting manner. 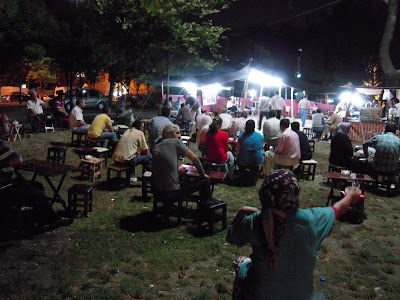 Alec would have loved it here. But he’ll always be here with us in our memories and in how we take actions in the world. Alec... legn zol in Gan Eden. May you lie in the Garden of Eden. There are good people out there in the world, people of many religions, of many cultures. We are honored to have shared it in your presence. And everyone, take the advice of Alec’s son Max, who posted a facebook message the evening his father passed: everyone, go out and hug your parents. If you can. While you can.
Posted by dumneazu at 3:42 PM

A very sad post. I understand your multiple loss of a close relative, a friend, and one of the last repositories of a disappearing culture so dear to us all, und ikh bataylig zikh in ayer tsar.

I am a goy in Tulsa, Oklahoma. I know very little about Jewish customs and less about Islam. I send you sincere sympathy for the loss of your brother-in-law who sounds like a wonderful friend to all who knew him.

I have been lurking about enjoying your interesting blog without commenting. Tonight I read your story about joining the community for the meal breaking the fast and asking people what it meant to them. What you show me are sincere thoughtful people trying to observe the discipline of their faith while also trying to understand what that means to them in their personal faith journey.

Like many Americans I have been introduced to Islam in the aftermath of the 9/11 tragedy. The most visible face of Islam is that of terrorist and extremist groups in Afghanistan and other places. In this little essay you give me the sense of a very different faith, one of reflection and a desire to find the peace that faith can bring. Thank you very much. I think you have given me a truer view of what Islam looks like.

This is a beautiful post, Bob; sad, to be sure -- but so thoughtful and moving. And I read it after putting my Dad on the plane back to LA this morning...

Anonymous said...
This comment has been removed by a blog administrator.
2:51 AM