Big Night in Budapest: The Naye Gig with the Técső Band 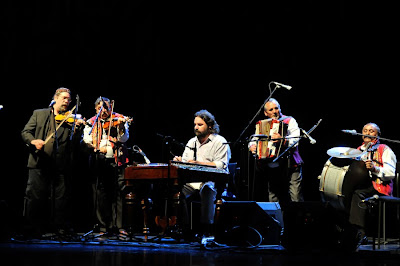 Our concert of Di Naye Kapelye with the Técső Band at the Budapest Palace of Arts on October 1 went well - considering the logistics of getting everybody together, rehearsed, and playing while speaking in in six languages simultanesously. The operative languages in this group are mainly Hungarian and Hutsul Ruthenian, although I speak rudamentary Romani (Gypsy) with Ivan, the Técső fiddler, who is the only member who doesn't speak Hungarian. Yankl speaks a bit of Magyar, but since he hadn't been in Hungary in four years it was justifiably rusty. Six languages per rehearsal or gig. Just try that in your local bluegrass band. 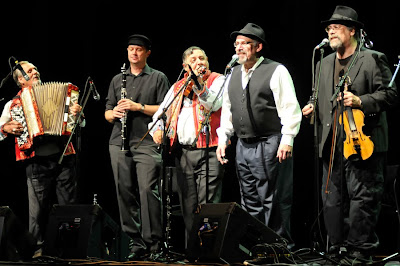 It was a blast just leading a band of this size - something I have only experienced while teaching Klezmer music workshops, in which case it isn't like you are really fronting a band as much as leading the High School orchestra in band practice. I think this was also the first time the Técső Band played a full blown concert hall - they usually play folk festivals and bars, but they were mighty impressed with the hall's acoustics and the blue ribbon treatment that one gets backstage at the Palace of Arts. 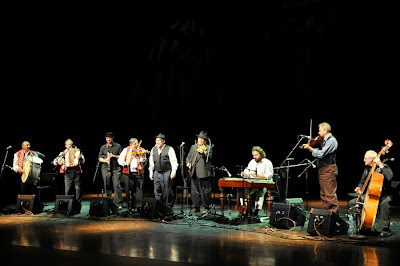 When you have that many musicians - and none of us play from music notation - you've got to get a rehearsal in, just to shake out the bugs and eliminate those awkward surprises. When I was just starting out in music there were bands that I played in where everybody would just stop onstage and look at each other when somebody missed a cue or made a mistake. A professional musician is not necessarily guaranteed to not make a mistake now and then - he is paid to act like it never happened. 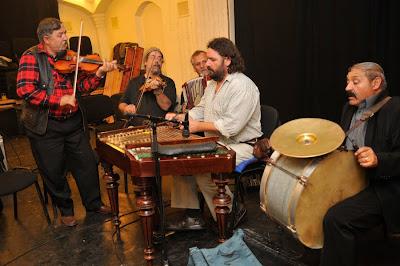 The evening before the concert we had an open rehearsal in the basement of the Siraly in the seventh district, mainly to run through the tunes we would play together. After a while friends drifted in and we ended up playing for a full blast klezmer dance session. Veteran Klezmer dance teacher Sue Foy led the freylakhs, and it wasn't surprising that Joska joined in seeming to know the dance already. 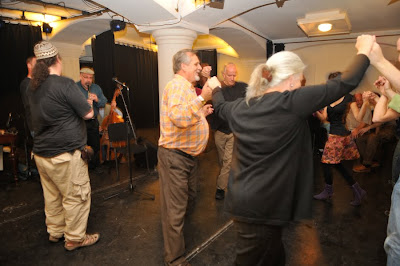 We also had both of our clarinet players along for the ride. When you really want to blow an audience away, use two clarinetists and two lead fiddlers. Works like a charm. Our main man when playing internationally is Yankl Falk, from Portland Oregon. But Yankl can only get to Europe for the longer tours, so a lot of the local work is taken by Janos Barta, who was one of our first clarinetists and who now leads the Veszprem Klezmer Band. 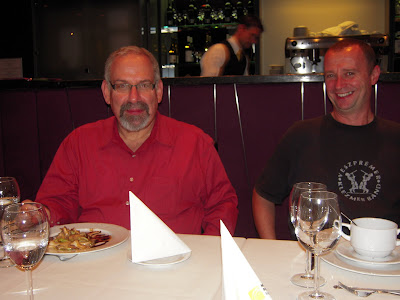 Our next gig (without the Técső Band, alas, but with the guest appearnce of New York Klezmer fiddle prodigy Jake Shulmen-Ment whose new CD "A Redele" is now out) will be in Bucharest on November 4 at the Museum of the Romanian Peasant concert hall. (Clubul Țăranului la Muzeul Țăranului Român, Şos. Kisseleff, Nr. 3) A little taste of what Jake does: with Raoul Rothenblatt (bass) and Pete Rushevsky on tsimbl playing a set of Klezmer fiddle tunes from collections I gathered in Iasi fifteen years ago. Jake does my stuff better than I do!
Posted by dumneazu at 1:52 PM

The concert was very good, i enjoyed it, but i can never forget those good old days when DNK played in the Fonó Budai Zeneház, especially not in the concert room but in the bar! Unfortunately it was quite long time ago.
You mentioned the previous day open rehearsal! I would have been very happy, if i had known it before. If something similar (i mean unofficial performance, concert, rehearsal, whatever) will happen, please inform us here in advance!