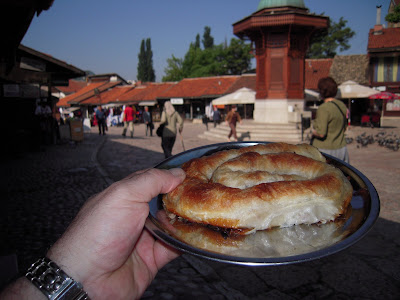 Let's bring our Bosnian extravaganza to a close with some musings on burek, one of my favorite street foods. Back when this blog was beginning we were spending a couple of months in Istanbul, and our breakfasts often meant heading down to the local börek baker and ordering tea and a slice of the flakey pastry filled with meat known throughout the former Turkoid world as börek. In the Balkans, the word morphs with various spellings into burek. And Sarajevo has some very good burek. 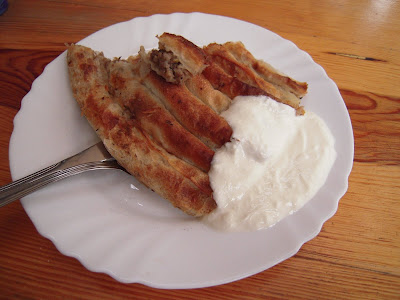 The winner of the burek competition was a tiny place on a side street in Bascarsija simply advertising "Sac Burek." Sac is turkish for a charcoal grilling process in which a large metal pan is filled with coals and hung above the burek to bake it from above - kind of a dutch oven idea but adapted from the older Anatolian tradition of baking layered flatbreads without a real oven. 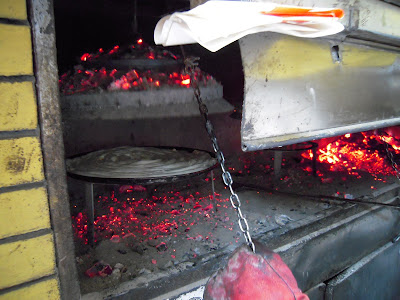 The burek pastry is called yufka, just as in Turkey, and is made by preparing a simple dough of flour and water and then soaking balls of the dough in oil for a few hours. The resulting dough is shiney with shortening and, beaten out, becomes elastic. Rolled and tossed until it is a thin and translucent parachute, the yufka is filled with meat (classic burek) cheese, potato, or spinach and cheese and rolled into a coil and baked. At the Sac burekdzinica it was served with a side of thick clotted cream. Breakfast doesn't get better than this for one Euro. 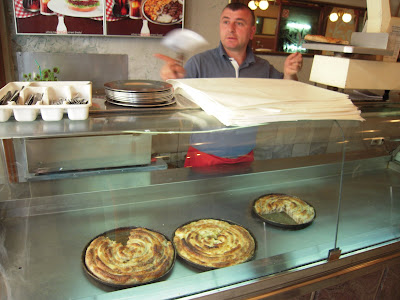 The best part of staying in the Bascasija district was the convenient access one had to amazing, high quality cheap eats. Wake up, drag self down to street, start drinking coffees and fresh orange juices and grab a slice of the world's best burek for next to nothing. Practice speaking a barbaric mixture of agrammatical South Slav mixed with Turkish with the owner, usually on the topic of Turkish football. "Turkiye? Dobro. Besiktas? Mnogo dobro. Moje team. Cok iyi! Super!" Continue throughout the day. 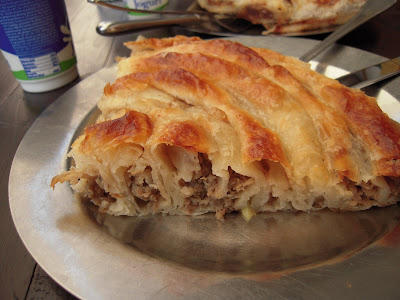 We can get burek now in Budapest - although it can't hold a candle to burek in the Balkans. there used to be a Kosovo Serb refugee in town who made burek for a select string of late night bars, but he's resettled himself in Serbia now. There is a Voivodina Croatian Bunyevac family that runs a couple of bakeries (on Kiraly utca and another on the Korut) that makes a decent northern style burek, and there is also a Serb bakery in Ujlipotvaros that is making burek. They, however, microwave their burek before serving it, which pretty much destoys them as it destroys any bread or baked product. Burek is best enjoyed fresh... and perhaps it is even better enjoyed by the seaside in Istanbul... Karakoy... mmmm... 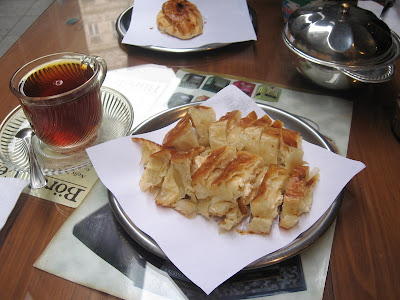 We managed to get some shopping in for the twelve hour trip home from Sarajevo at the central market, the Markhale, located in the center of the downtown. I picked up strings of dried okra for making stews, Fumie stocked up on fruits and greens to take back to Budapest, and I lucked out at one stand selling home brewed rakia for 5 Bosnian Marks a bottle (US$ 3) 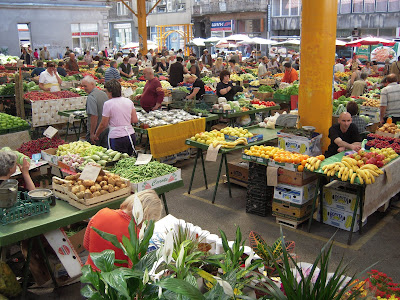 The Markale was the site of one of the final atrocities of the Siege of Sarajevo.The first happened on February 5, 1994 when 68 people were killed and 144 more were wounded when a Serb mortar was shot into the Market from the hills above Sarajevo. The second occurred on August 28, 1995 when a mortar shell killed 37 people and wounded another 90. This latter attack was the stated reason for NATO air strikes against the Bosnian Serb forces that would eventually lead to the Dayton Peace Accords and the end of the war in Bosnia and Herzegovina. 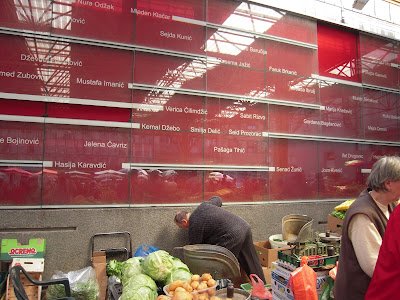 Today the market is thriving, and a wall in the rear of the market honors those killed during the bombings. The bombs were indiscriminate: Muslim Bosniak names rest beside names of obvious Serb and Croat origin as well. The monument was one of the more moving that we sawe in Sarajevo - life goes on, yet no one forgets the victims. On our way out the next morning, we passed destroyed villages in the northern part of Bosnia where the present day invisible dividing line separates the Muslim Croat Federation of Bosnia from the still isolated Republika Srpska. 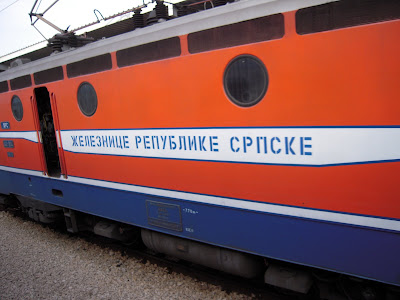 The Bosnian Serb Republic may well be one of the most diplomatically and economically isolated parts of Europe, somewhat more legitimate than the Transdnistran Republic, but destined to remain in a legal limbo as long as war criminals such as Ratko Mladic continue to take refuge there. It is also a center for the local style of roots music, the almost amazingly unmarketable sounds of Izvorno Zvuci music. This is the local style of fiddle-and-scream music based on the narrow harmonies of the Bosnian mountain singing instead of the smooth urban music of Sarajevo sevdah. You see the crude hand carved sargija lutes - essentially primitive two course diatonic saz - for sale in a lot of Bascarsija shops. 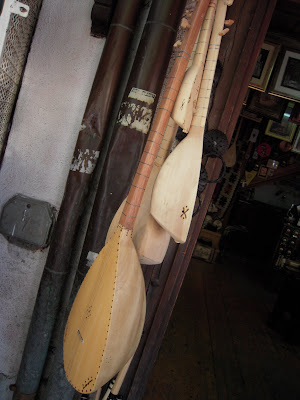 As far as the Izvorno sound goes, check out Youtube. My buddy Ben Mandelson tried to promote an Izvorno band on Globestyle records back in the grand blossoming of the World Music movement during the late 1980s: Kalesijski Zvuci: Breakdown: The Unpronounceable Beat of Sarajevo. The album set records for least popular World Music Recording of all time. As anybody knows, I am a sucker for wild, scratchy fiddle-and-scream music of all types, but Bosnian Zvuci is just about the limit for me. I mean, no way could I actually listen to this for an entire CD. Anlother issue is that there is an awful lot of strongly nationalist Izvorno music around, and when you get to where you can understand the lyrics it can be downright uncomfortable to listen to. But that's why we have youtube!And if you need more, just surf youtube, the lazy ethnomusicologist's best friend!
Posted by dumneazu at 6:16 AM

Burek is the food of the gods.

Burek and Fiddle-Scream music; what an amazing post, and here I was just trying to figure out how to get great burek in Sarajevo. Well I'm off to try to find some Sac Burek. Thanks!