The Jewish Cemetery in Pest. 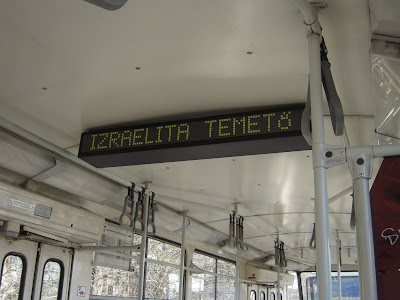 For all the recent talk about Holocaust memorials being dedicated in Hungary, probably no better memorial to the Jewish victims of WWII can be found than at the Izraelita Temető (Israelite Cemetery) located out at the end of the 37 tram line (which leaves from Blaha Lujza ter in Pest. the 28 takes a similar route but only goes as far as the Kozma utca General Cemetery, which is about a kilometer away from the entrance to the Jewish cemetery. The Jewish Cemetery closes at 3 pm daily.) I was doing some research and decided to take the tram to the end stop: although I have seen dozens of old Jewish cemeteries in East Europe, I had never been to the main Jewish cemetery in Pest before. 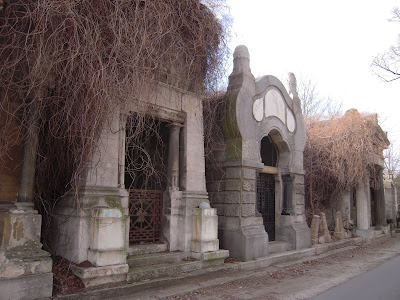 The grand families traditionally had mausoleums erected to house the earthly remains of the family. What stands out is the cozy Hungarianess of the place: many of the grave stones are inscribed in familiar, affectionate remembrances: "To Our Mama" "My Dear Life: Little Gyuszika." 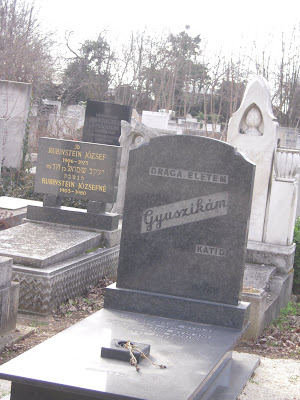 One stone identified the resting place of a musician. I've seen a lot of these: in Iasi the grave of Iosif Sava, a popular klezmer, composer and father of Romanian TV personality Gheorghe Sava had a harp marking the grave. In Cluj there is an entire marble piano carved to mark the grave of one popular composer. Violin shaped stones are not rare. I wonder if the stonemasons would be able to make a decent grave marker featuring a Moldavian bagpipe? 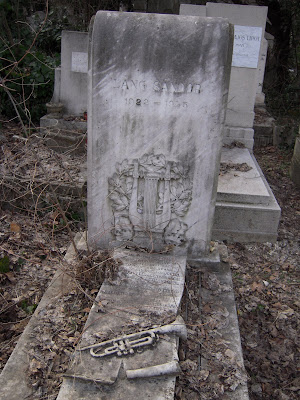 But one stark fact emerges as you walk down the well kept rows of old stones: the sheer number of graves marked by deaths from 1944-1945, the year the Hungarian Arrow Cross and German SS colluded to destroy the Jewish community of Budapest, which had survived until then under the relatively tolerant Hungarian rule of the Regent Admiral Horthy. 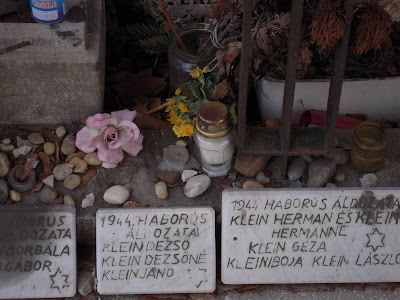 The piles of stones are a Jewish custom: instead of flowers we place stones on graves, to signify permanence. The cemetery is marked by several major monuments to local Jewish communities destroyed during the War, as well as graves symbolically marked for those who never returned from the concentration camps, such as the monument below, dedicated to "Our Grandparents who were killed in Auschwitz, and their children..." 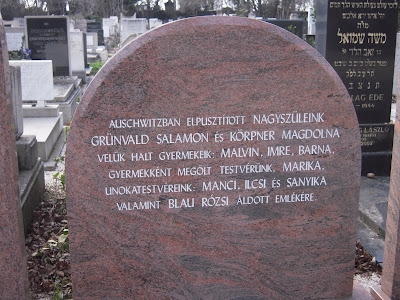 The main memorial to the victioms of the Shoah is a stark, empty memorial, incorporating walls on which thousands of names of those killed in the camps and deportations are etched in stone. 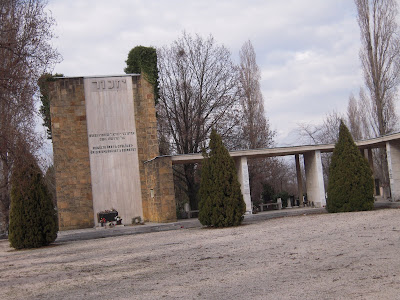 Huge columns display the names of the slaughtered: from Bergen Belsen, Auschwitz, massacre sites in occupied Yugoslavia, the Forced Labor camps. The sheer number of names displayed here, in the cemetery, has an effect of remembrance which, I feel, is far more moving than many memorials built in the last decade. Here you feel you are among the victims, they are right below your feet, thousands of them. Present and never forgotten. 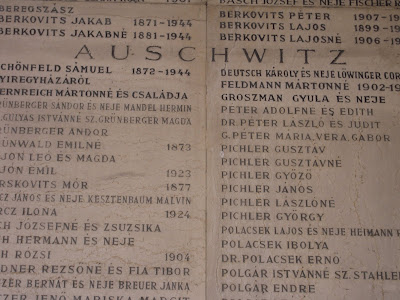 So many of the victims were identified only after the war, as information trickled in, that the walls have become a kind of ongoing meta-project, as surviving family members add names by hand, notating dates and personal information about their loved ones. 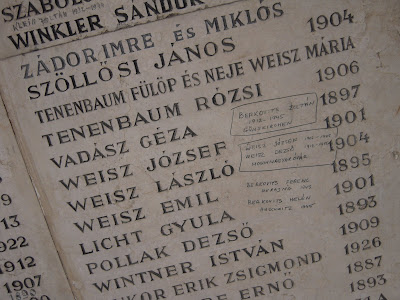 And finally, a testament to the bitterness felt by many of those who survived the destruction, only to return to a world without relatives, family, to return to di khurbes, the destruction... The inscription reads "As long as people live on the Earth, Let the Germans be cursed! Amen!" 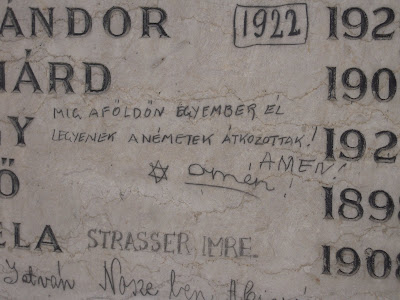 Sorry I didn't go with you -- haven't been there for several years, and I miss "visiting" Lipot Baumhorn. Next time I'm in town, we can go to Kerepesi Jewish cemetery.... Ruth