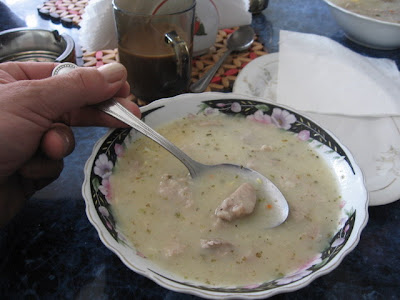 The slop pictured above is the heavenly soup known in Polish as zurek. Zurek is my default cheap meal of choice when in Poland, a thick, sour bowl of fermented wheat bran (the stuff we call cibere in Romanian) with bits of meat, kolbasz, and hard boiled eggs mixed in with some potato if you are lucky. This bowl cost me one Euro at a truck stop between Gdansk and the German border. Is there anything more welcoming than a Polish truck stop? Driving around Poland is hard work - the country is surprisingly huge, and getting from Krakow to, say Gdansk takes about 13 hours of slow, careful driving down the narrow, crowded two lane country roads that serve as the main national highways in Poland. 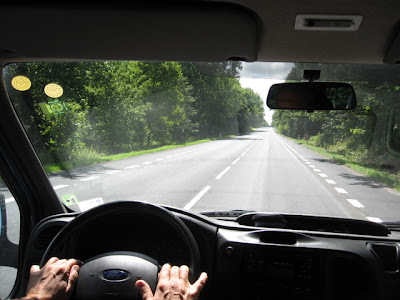 The Poles themselves are well aware of the shameful state of their highway system. Back in communist times, the Russians and their Polish communist lackies determined that keeping the roads narrow and undeveloped would slow down any expected NATO invasion force trying to reach Russia from Germany. Since 1990, however, there has been lots of EU funding for roads, but only short bits of highway near Warsaw and Gdansk were ever completed. The money went somewhere... but nobody really knows where. Unlike our system of roads in Hungary. In Hungary our previous conservative FIDESZ leadership realized early on that the Big Money was in road construction (especially if the Prime Minister's family owned the gravel pits and contracting firms... these guys definately stayed up late watching the Sopranos.) This is not corruption. This is simply very good New Jersey Logic. It's an old rule of thumb among certain ethnic groups in New Jersey that "there nothing that says ka-ching! ka-ching! like a new four lane highway overpass!" The Polish ruling elite need to learn from Hungary's example. Or start watching The Sopranos. 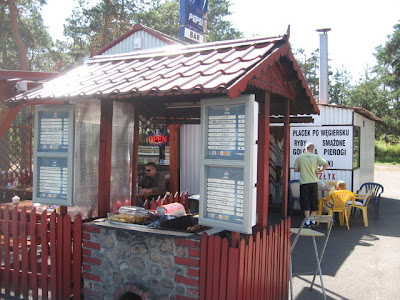 The basic Polish trucker stop is usually a simple shack located on on a small turnoff along the donkey paths that serve as Poland's national roads. Great big brawny guys named Stas and Janusz, often sporting huge handlebar moustaches, park their eighteen wheelers and wander up to the grill, maybe taking a shower out back (from a bucket shower rigged up to a tree) first to wash the road grime off. 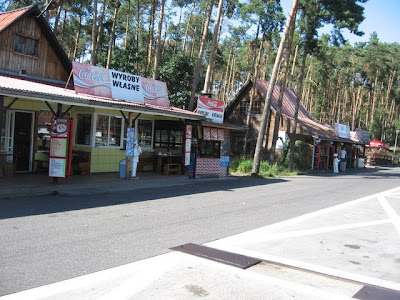 Poles are not avid vegetarians. Polish truck drivers in particular, are not prone to veganism, lacto-fruititarian, or organic bran diets. Poles eat meat. It makes them big and strong, which you have to be if you are located between Russia and Germany (had fate provided Poland with neighbors like, say Portugal and New Zealand, the Poles could have developed in an entrely different, more fragile and graceful way.) As it is they are the toughest kids on the EU block, fair but firm, the kind of nation you want to have on your team when the poop hits the fan... 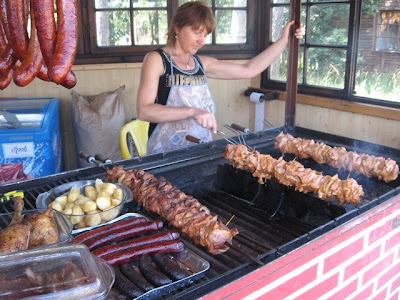 If you are just taking your first break from the last six hours of staring at asphalt, this is what a Polish trucker wants to see. Huge mountains of meat. Pork chops skewered into a gargantuan, unkosher version of shish kebab, huge slabs of bacon, ham hocks, humoungous grilled chicken legs (from real, farm raised chickens, none of that supermarket chicken for our Polish truckers, no!) and great heaping sections of grilled Polish kielbasa and blood sausage. 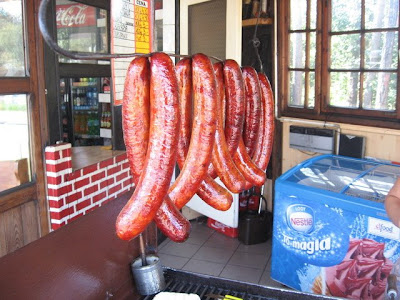 Growing up in the New York area, Polish kielbasa was one of the fondest memories of my mispent adolescence. Since we couldn't get Hungarian kolbasz very easily (short of a trip to the Hungarian butchers in the Yorkville section of Manhatten) my Hungarian Mom used to make do with Polish sausage. Polish kielbasa was also the lunch of choice when I worked on a sanitation truck crew in Hackensack, New Jersey. My garbage crew (six muscular black guys who moonlighted as the Gospel choir of their church and who used to practice singing while unloading huge cans of trash) would often stop on our way to the dump at a kielbasa shack in Garfield, NJ (population 50% Polish, 50% Hungarian) and demolish a few dozen grilled links before nine AM on any given morning. 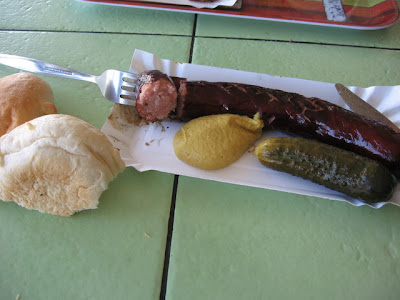 Of course there is more to Polish cuisine than truck stop chow. in Krakow, Fumie led me to the Restaurant Polskie Jadlo, which featured the Golonka Festiwal, a celebration of pig's knuckle in all its greasy, gelatinous glory. 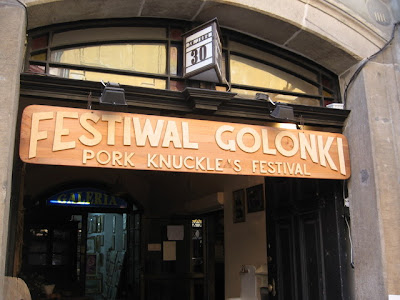 Golonka is roast pig knuckle, and it features on allmost every Polish menu. At the Jadlo this little joint of piggy goodness was offered in a dozen ways - we chose to split a big one in garlic and plum sauce, with a huge dollop of horseradish and mustard on the side. Eating these may well be illegal in the state of California, which is why we eat them in Krakow. And mind you, this is "light summer food" in Poland. 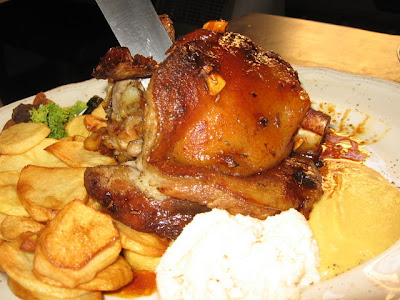 Since we are all going to die anyway, we might as well know why. If the golonka isn't "mortality on a plate" enough for you, the starters definately were: pork lard mixed with pork cracklings and herbs, spread on thick slabs of Polish rye bread. You begin to notice a theme here, and that theme definately doesn't have anything to do with being kosher. Yes, I know that I will have a lot to answer for when I get to the Great Kosher Meal Plan in the Sky. But, doesn't God love a sinner? Or a fool. I'm not sure which. 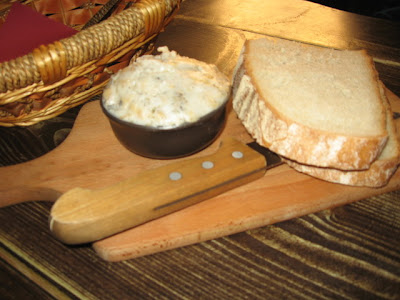 But fine cuisine alone is not what drew me to Krakow. We had a gig at the Harris Jazz Piano Bar, a lovely little basement venue located right on the Rynek square in downtown Krakow. Our host was the wonderful Gosia Michaelska, who we met in Budapest where she works on Polish cultural exchanges with the new Polish-Jewish bookshop on Nagydiofa utca. It was our first gig with Florin from Palatka, and the crowd - which came for straightforward klezmer - loved the Transylvanian Gypsy stuff we played for them. Fumie took the video below using a special Canon Belly-Increasing Macro lens, so objects seen in the video (such as my gut) may appear larger than they do in real life.
Posted by dumneazu at 5:50 AM

Mmmm, a very tasty post indeed, and it rings true. We were staying at a small Romanian hotel when the Warsaw Chapter of the Harley Davidson Motorcycle Owners Club came to visit. Their leader demanded "meat meat meat", and when the proprietoress didn't understand he impersonated a cow for her. They proceeeded to get blind drunk, but, to everybody's surprise, actually turned off their music at 10pm when asked to do so. Yeah, I'd want to have them on my team rather than on the other side!

Oy veh, that took me back. The pork fat is called Smalec and is a heart attack in an earthenware pot. But what a way to go. I have eaten golonka at Polskie Jadlo in Krakow, and even paid a visit to the Harris Jazz Bar back in 2000 on one of my many trips to Krakow with my late husband Harold. My CD collection is full of souvenirs of Krakow - the Krakow Klezmer Band, Kroke, that other lot - what an excellent blog you've got here Dumneazu: world music and food, you're the man I've been looking for all my life! When are you playing in Brussels? Thanks for the link Gadz!

Auto Angel said...
This comment has been removed by a blog administrator.
4:10 PM