Kiev and the Triumph of Dolginism.

A few first impressions from our arrival in Kiev. Now remember - until mid April I had no idea we would be spending two weeks cruising down the Dnieper River from Kiev to Odessa on a boat load of Klezmer musicians led by the irrepressible Josh Dolgin, AKA DJ Socalled. 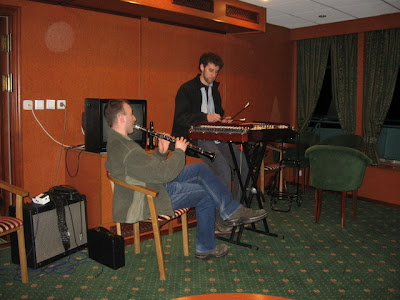 Jamming in the lounge on the first night, Alex Kontorovich and Eric Stein ran through some of the late German Goldenshteyn's horas. Alex - who was born in Russia and speaks Russian fluently - spent several years apprenticed to German, and if anybody represents the continuity between the old and new generations in modern klezmer it is he. When he wasn't playing he was locked up in his room doing advanced computer mathematics. This is Eric's first stab at playing his new cimbalom... after discarding the metal legs Akos had designed for it. Akos, an acoustic perfectionist, wasn't that good at designing cimbalom legs, so Eric used a keyboard stand and rigged a bicycle brake wire for the pedal. 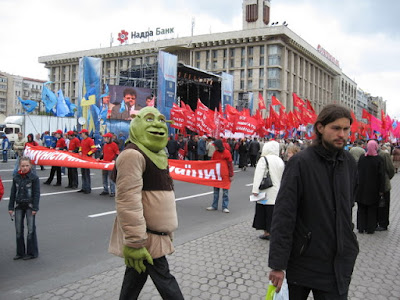 In the morning we took a stroll, and thus bumped into the Ukrainian communist Party rally on May Day. As you can see, the Communist Party still attacts a wide variety of support in the Ukraine. I mean... they still adddress each other as "Comrade." Along the way we ran into Comrades Aisling and Andre from the Canadian film crew who were making a documentary about Josh and the cruise... marching in triumphant solidarity with workers of the world. 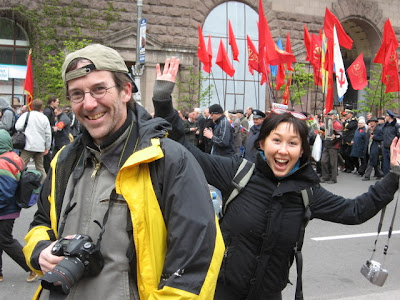 Just down the street was the famously overpriced Bessarabian Market, the place the mafia go to buy imported fish and radishes at inflated prices. This was as close as I got to my roots on this tour, since me and Fumie seemed to be the only ones on the boat with no family connection to the Ukraine... 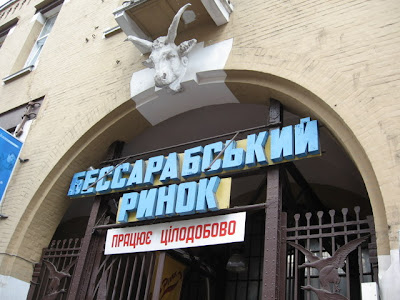 Ukrainians eat a lot of fish - mostly smoked or dried. There were about six different cures for smoked sturgeon and salmon, lots of smoked mackerel, eels, and of course, caviar. 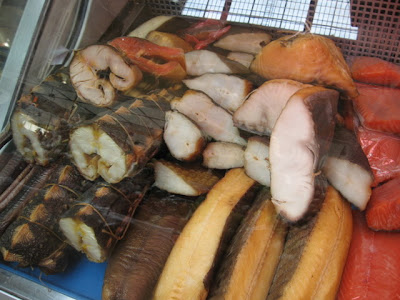 Below are the Ur-pickles of the New York Jewish palate, the grandmothers of Essex Street's pickles... wonderful tart crunchy pickles. 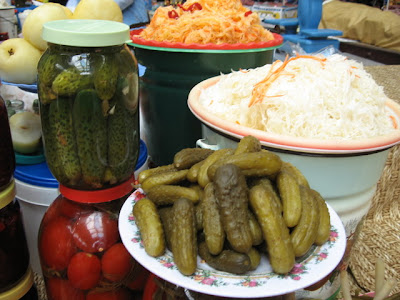 And of course, pastrami. Yes, this is the ancestor of pastrami, here known as bastirma. It is eaten in thin slices as an appetizer, and it is quite slaty and paprika-spicey. Basically smoked meat covered in spices. 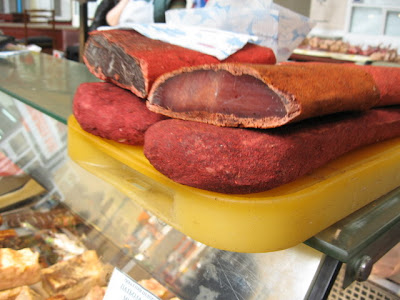 This pastrami is closer to the Turkish forms of pastirma than to the deli meat we eat at Katz's. Also on the cruise was Barry Lazar, Canadian food journalist and film maker whose film Chez Schwartz about Montreal's smoked meat shrine Schwartz's was shown on board. A real food maven, Barry was a load of fun - the man would eat anything. I almost bought him a dried, salted whole pike, but my better judgement prevailed. I bet he would have eaten it. The central synagogue in Kiev. It seemed mainly families of Chabad Lubavitch in attendance, although there were a lot of ortho Litvaks as well, if the size of their black hats is any indicator. Lubbies go for flat caps and Borsolino fedoras. Litvaks like huge wide brimmed fedoras, sort of like Hasidic cowboy hats. 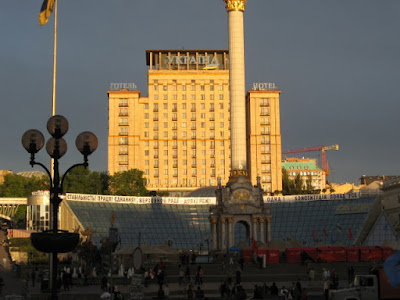 This is how Josh Dolgin reacts to the captain of the ship ordering a life-preserver rehearsal. Wander around, snap pictures, turn back to Captain. 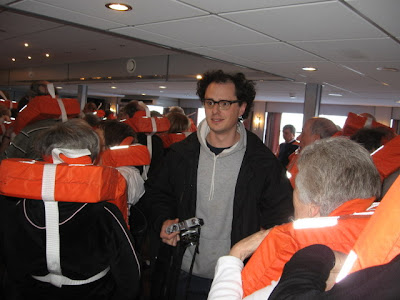 I'm slowly putting some of my shakey videos up on my Youtube page... but here is Alex and Eric playing German Goldenshteyn's hora.
Here's a bit of the late night party in the ship's bar on the first night. Helene Domergue of Nimes, France was along teaching Klezmer dance. Here she leads a freylakhs dance to the old Barry Sister's chestnut "Hopkele"
Helene - whose Yiddish is fluent and rich in old time polish Yiddish idioms - is quite a singer, as well as a regular party animator. Here she leads the song "Sha, Shtil."
Posted by dumneazu at 6:56 AM

I love the shakey vids! it reminds me of the rocking of the Dnieper! I love the market shots, the bright coloured wurst (is that right to say?), and the communinist rally pics! Hope everything is going smashing back in Budapest, it was great to meet you two, and I hope to make a trip there soon!

The secret to good video is shakiness, Miss Chin Yee. Your should know that by now!