Sixteen tons of hot salami,
corned beef, rolled beef, and hot pastrami,
I hock arayn everything git tsu esn
I owe my neshomah to the delicatessen I thought I would be able to maintain my strict dieting regime while on tour in the US and Canada with the noble Brothers Nazaroff, but that was not to be. Performing Yiddish music at Klezkanada and in Montreal, Toronto, and New York put us near of some of the best Jewish delicatessens around. On my first free half day in Montreal I was breaking my fast on the King of Meats: Schwartz's smoked meat sandwich.

All spring I had fasted on vegetable juices and tee-totaled goodbye to demon rum in expectation of this day. On this day I marched up Boulevard Sainte Laurent at 11 AM to make it to Schwartz's Delicatessen before the eternal line of tourists begins snaking out the door and down the street. I had waited through months of vegan misery for this moment. I even ate salads for a week at Klezkanada.Today was the day I would introduce my beloved Fumie to the magical world of Montreal smoked meat, a world that I had spoken so much about since my last trip to Montreal.

I have posted about Schwartz's here before. Simply put, in the world of Jewish cured meats, the argument always comes down to Schwartz's versus Katz's Deli in New York. Montrealers tell me that Schwartz's isn't the only great smoked meat sandwich in town (there is the Main, and Lester's and Smoked Meat Pete among others) but for Fumie, on her first trip to Montreal, a pilgrimage to Schwartz's was obligatory. She bloats up on bread, so she went for the small plate of smoked meat (fatty, of course) which comes with a stack of rye bread on the side should one wish to construct sandwiches.

Kind of like cured beef sashimi if you approach it right. My sandwich was small - as most deli sandwiches are outside of the tourist belt of Manhattan - and although perfect in every way, I eventually used Fumie's rye bread and leftovers to increase my dosage by another half sandwich. Smoked meat is a bit different than pastrami: its is made from the brisket, the lower part of the beef stomach flap, not deckel, the breast flap as is used in US made pastrami, and the spicing is a bit heavier on coriander, but risking charges of heresy I may actually say it is better than Katz's, at least until I sink my molars into one of Katz's ridiculously expensive (but great) $18 pastrami sandwiches before I head back to Budapest. 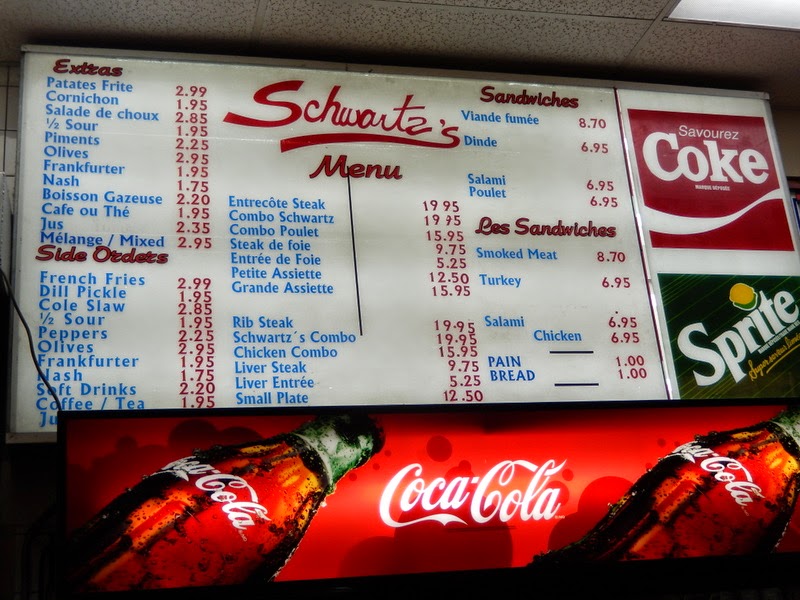 After the nationalist Parti Quebecois came to power in the 1970s, a lot of Montreal's English speaking population, including a large percentage of its Jews, migrated to Toronto. Toronto's Jews brought a nostalgia for smoked meat that led Zane Caplansky to start smoking his own variation in a local bar, which proved so successful that he soon opened Caplansky's Deli nearby, experimenting and tweaking the recipes until he had created one of North America's best pastrami/smoked meat hybrids.

We arrived to meet with Michael Wex, author of the bestselling book about the Yiddish language Born to Kvetch, and Canadian singer songwriter Geoff Berner - known as the "Whiskey Rabbi" - who has also recently penned the hilarious novel Festival Man. Wex is the heart and soul of Canadian Jewish wit, and Berner, well... Geoff is fast becoming a lesion on its liver. Geoff and his band traveled with me to Romania about ten years ago to look for Jewish fiddlers in Tranylvania and Moldavia, He still sings about that trip.

After filming some enlightening interviews, including Wex declaring that by singing in the Yiddish Language the Brothers Nazaroff are voluntarily choosing to commit commercial suicide, we ordered lunch (on somebody else's budget, Thank you very much!) Unfortunately, Geoff Berner accidentally beaned Jake Shulman-Ment on the head with a knife while trying to dismember an errant hornet, but in truth the gash was minor and didn't bleed much and was at least a wide half inch from Jake's cornea and Jake is a fiddler and doesn't really need his eyes all that much to make a living anyway because blind musicians have always been a part of traditional music and he has already seen so much that he doesn't really need those eyes and he would have had one left over anyway.

And Geoff felt really bad about it, the throwing a knife at a new acquaintance's face thing... it was so un-Canadian, really. So... Geoff! You never know what he will be up to next. Touring Norway with his band or stabbing fiddlers in the face... such a character! And thus our sandwiches arrived.

My previous experiences with Caplansky's sandwiches were at the Ashkenaz festival a few years back, and I wasn't blown away, but obviously the recipes have been perfected and this baby was a close contender for Top Ten deli masterworks of the world.  We also split a "What Hank Eats" special, which was a classic old school deli sandwich of griddled Kosher salami, red onions, and chopped liver. The chopped liver... too creamy. I understand why catering halls started making chopped liver in machine blenders, but I used to make three kilos by hand chopping liver, onions, and eggs together every afternoon when cooking for a Budapest bistro and there can be no better texture than chunky chopped liver. We sold it out by 8 pm every day. Hand choppingg the liver while warm is the secret to good chopped liver.

I also opted for a small smoked meat poutine, but since that is a purely Canadian concoction I will leave it to provide fodder for the full poutine rant in a later post. Other than Caplansky's and the Ashkenaz Festival, I should mention that Toronto has a really great Brazilian bakery, a Chinatown, and a big tower. Onward to New York! When we talk about New York, we usually talk about Katz's, and yes, I will talk about Katz's very soon but not right now... I want to talk about my home province, the Bronx.

Working with a film crew in tow is tiring for a band, and one works up a hunger, or as Dan Kahn calls it when he sees me getting grouchy and nasty around noon "Uh-oh! Bob is getting hangry." Lucky for us we were near Liebman's Deli. Located in the Kingsbridge section, near Riverdale, Liebman's is one of the last two delis in the Bronx, where there were once well over a hundred delis. And Liebman's is still serving a local clientele, unlike the delis in Manhattan which can only survive as tourist attractions due to the high rents and rising costs of making an artisanal deli meat product in house.

We showed up at Liebmans at lunch hour - somewhat unfortunate time since we had a full film crew in tow and there were already lots of people waiting for tables for lunch, but the management of the place were patient and smoothed out all our difficulties. So here we are, the egg creme de la monde klezmer, all seated around a kosher deli table, and what do we order? Pastrami, my good man, and plenty of it.

Liebmans is one of the few places in New York that still cures its pastrami in house. They also cut it thin, on a machine slicer, which is actually how most of the old delis in New York used to serve it. Hand cutting pastrami or corned beef, the way it is done at Katz's or Schwartz's, produces a huge amount of wasted bits of meat produced by the cutting. 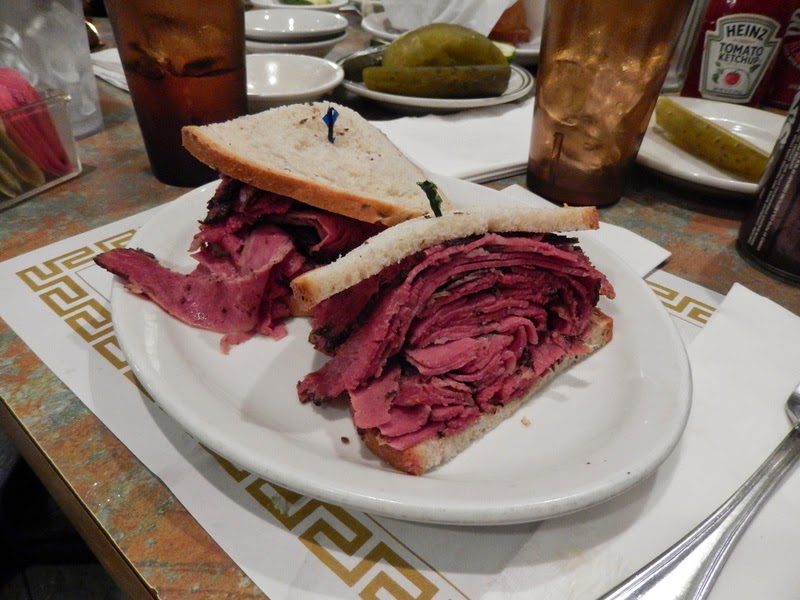 Pastrami or corned beef are one of the most fragile of things you can eat: from the moment it comes out of the steamer and gets sliced it begins cooling. By the time it reachers your table it is in prime condition but as it cools it begins to dry out, slowly deteriorating in quality even as you eat it. By the time you bit into the second half of the sandwich the difference is usually noticeable, and by the time you finish the texture and flavor of the sandwich has changed considerably from what you began with. Nobody really wants to take home leftover pastrami...

This is a genuine New York knish. A fried potato knish (pronounced ka-nish) to be exact, produced by the Gabila Family factory out in Long Island. For a century, this was the knish New Yorkers bought on the street and in delis, the cheap, hot, filling meal of the working classses that transcended race, religion, and ethnicity to become the stuff that filled New York's stomach in times of no money. A jacket of dough that covers a mixture of mashed potato, onions, and pepper, knish were also made at home and sold on the street by itinerant knish men, and each family had their own style and recipes. Home made knish tended to be bulbous things often filled with kasha (buckwheat groats) and mushrooms. The Gabila family originally came from Niš, in Serbia, and were Sephardic Jews who adapted their potato burek filling to the hardier New York market. About four years ago the Gabila factory burned down and for years the newspapers reported a knish shortage in the city and eventually lamented the disappearance of New York's iconic square knish, as bulging vegetarian baked knishes attempted to fill the void left by the fried potato squares. Gabila's have rebuilt and now they are back and promoting themselves as a healthy vegetarian meal, which, if you take a lot of drugs and are very, very old, kind of makes sense.

And as with all things... after lunch we have to get to the gig. At the Eldridge St. synagogue and Museum in Chinatown. Nazarovye!