"If you grow up in the South Bronx today you quickly come to understand that you have been set apart and that there's no will in this society to bring you back into the mainstream."
Jonathan Kozol

I grew up in the Bronx. at the Westchester Square end of East Tremont Ave, a neighborhood that was predominantly Italian with a sprinkling of Irish, Greek, Ukrainian, and old time New York German residents. Spanish meant Puerto Rican back then. Went to P.S. 71. After leaving the NYPD my Dad operated the first "multiracial" owned business in the Bronx, an Esso Gas and Service station on Webster Ave with a Puertoriqueño named Carlos. The Bronx is in my blood. Indelible. The Bronx is home to a million and a half New Yorkers, and remain the last borough to resist gentrification. The Hipsters do not colonize the Bronx as they have in Brooklyn and Queens. Not enough white people speaking English to make the Bronx feel comfortably hip. The Bronx does not appear in any tourist guide to New York. If it does at all, it is because of the Bronx zoo. We love zoos. We especially love great big green forests in the middle of the Bronx. It is the tail end of summer and we were set to enjoy it, even with the $15 entrance fees and the $5 add ons to get into the major enclosures. Go on Wednesday - known as "Ghetto Day" - if you want to get in for free and experience the crowds of low income Bronx families desperate for nature and fresh air.

The Zoo brought us back to the Bronx, or more accurately, Bob Godfried brought us to the Zoo. Bob, now a retired new York City shop teacher and New York's most knowledgeable accordion and free reed repairman,is my friend and guide to the intricacies of New York's ethnic music scenes. Bob was born and raised in and never left the Bronx when the great "white flight" to the suburbs happened in the 1960s, when the South and Central Bronx became the center for emigres from Puerto Rico, and later Dominicans, Cubans, Mexicans, and even Garifuna - Black Caribs, Native American Afro-Indians - from Central America. The influence of Afro-Caribbean religious traditions such as Lucumi, Santeria, and Vodun remains strong in Bronx communities, which led us to the Original Botanica, New York's oldest and largest botanica shop.

A Botanica is usually a tiny shop that sells the materials necessary to conduct, santeria or vodun ceremonies. New York is still full of them, in every borough, but Original is the biggest in NY. There is even a full service botanica nearby on Main Street in Hackensack NJ. These serve their communities the way mental health clinics do, but instead of paying thousands of dollars in co-pay to a shrink you go to a bruja and pay about $50 for some herbs and oils, and all your problems are fixed and you feel better.  Plus they probably speak Spanish or Haitian Creole. Santeria or Candomble followers are visible to other by the colored beads identifying the wearer as a follower of one of the many orishas, or Yoruba deities who personify forces of nature. 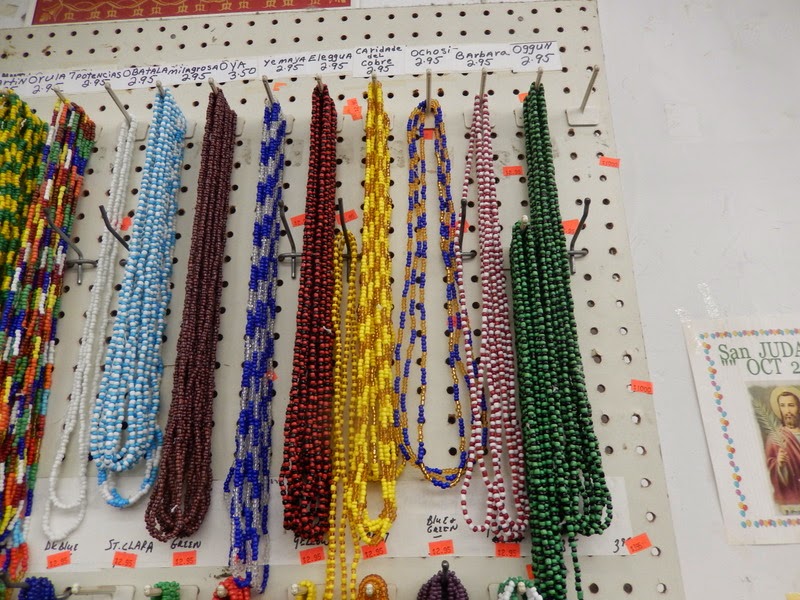 The Yoruba were one of the last African nations to be sucked into the slave trade: just as the British were beginning their campaign to intercept shps carrying slaves off the coast of West Africa, the Kingdom of Oyo fell in 1817 to Fulani jihadis coming from the north. the resulting waves of refugee Oyo Yoruba were taken as slaves by neighboring Dahomey - speakers of the Fon language and former vassal of Oyo - and sold to Spanish and Brazilian slavers. Yoruba often arrived in the new world fully literate. In Brasil and Cuba they formed communities to continue their social and religious traditions - called candomble in Brasil and Santeria in Cuba.


Yoruba also maintained their language, which became known in Cuba as Lucumi, from the Yoruba words oluku mi - "my friend." The divination sytem at the heart of Yoruba religion is Ifa, which is the name of the orisha of knowledge and fate. In classic Yoruba divination a babalawo or Ifa priest uses cowrie shells ( or coconut shells in some New World Santeria communities) tossed into the air and onto a tray to assess a patient's problem: Ifa himself arranges the cowries in mid air so that the babalawo can read their pattern, which serves as a sort of ID code to a verse of Yoruba poetry called the Odu Ifa. The first orisha that each ceremony has to deal with is Eshu, also known as Elegua, the gate keeper who negotiates communications between the spirit world and ours. He is a handsome man, half white and half black. In Yoruba Eshu "opens the road."


The essence of Yoruba religion is a deep understanding of humanity: both its positive and its negative aspects. Humans are flawed: it is a reflection of the flaws in creation. The flaws in Creation were repaired, so how can we repair our flaws? By giving and getting. You want something from the spirit world, you better be ready to give in return.

Like buying a candle and maybe perfuming some water in a scent deemed pleasing to the orisha being petitioned. But the intricate rituals of the Yoruba are not he only traditions practiced in the New World. At Original Botanica you can buy the nganga: iron kettles needed to prepare shrines from the Cuban Palo Mayombe tradition.


Mayomberos are sometimes considered dangerous: they are reputed to be expert on revenge curses and manipulative magic. Palo Mayombe reflects an older African tradition in the New World dating to the earlier years of African slave trade when millions of slaves were taken from the Bantu-speaking Congo regions to Cuba and the American South. These religious traditions transformed into the Petro side of the Haitian Vodoun Religion, the Voodoo of Louisiana, and in fully creolized form, into the Hoodoo tradition of the Black American South.


Hoodoo has always been present in American Black communities, but following emancipation the existence of African religion found strong resistance from the nascent Black churches and began to rebrand itself as a folk belief best known from old blues song lyrics.

Muddy Waters sang "I got the black cat bone, got John the conqueroo, I'm gonna mess with you" High John the Conquerer was said to be an African Prince carried into slavery: a dried plant root carries his power. 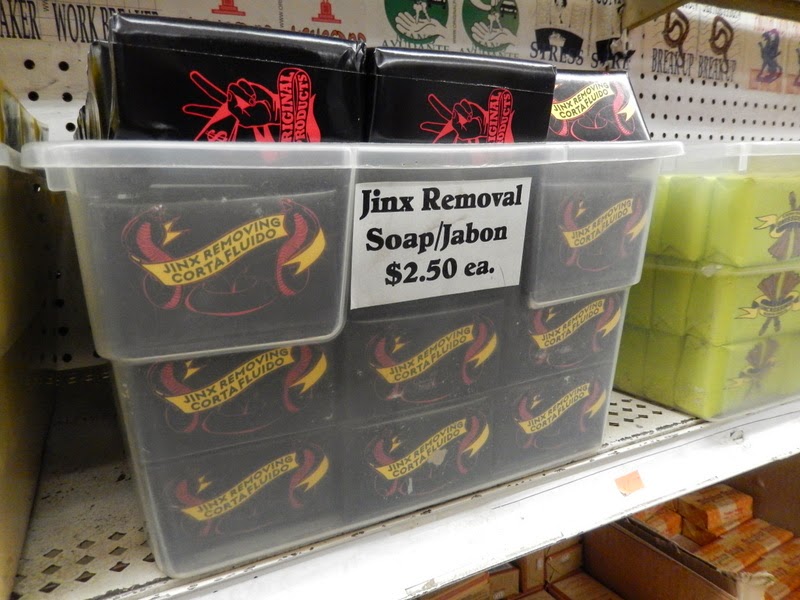 You can use some soap if you don't want to prepare the root. Ọr just cover all your bases with all-purpose Jinx Removal soap. Got problems in gambling? Black Cat Bone is what you need. Zora Neale Hurston, the anthroplogist/writer/ active during the Harlem Renaissance wrote about Hoodoo in her books "Their Eyes Were Watching God" and "The Sanctified Church" before falling into poverty and obscurity in the 1930s. Urban Black intellectuals weren't  comfortable around Zora, who was an initiated Voodoo priestess from the tiny town of Palatka, Florida. Yes, you read that right.
Palatka, Florida. 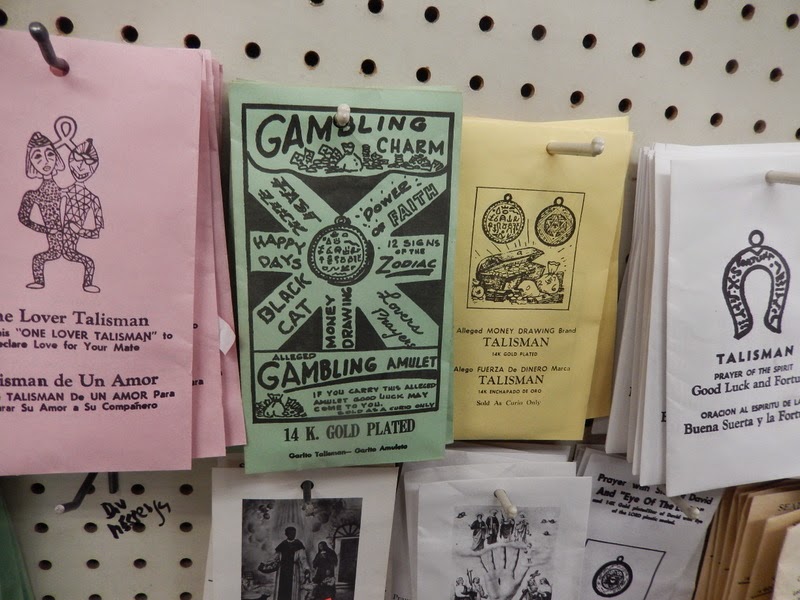 And if you have problems with the ladies, try lighting a candle: there are ladies'candles as well, in all races and sizes. There is something primal about magical solutions to daily problems.
Maybe that is why people continue to be attracted to them. There were coyote skins for sale, Ifa divining plates, dried chameleons, herbs for cleansing ritual baths, ritual charms to help women get pregnant, herbs to defeat lawyers, to find a good job, to ensure safe travel, even to bring good luck specifically to Venezuelans (I am not making that one up, I swear.)

The owners of the Original Botanica since 1959 are a family of Sephardic Jews, which makes fine business sense if you wanted to stay  in business in the Bronx all that time. They aren't followers of Santeria but respect the local need to keep a supply of... well, dried chameleons and stuff. Even during the most lawless "Fort Apache" days of the Bronx' decline in the 1970s, nobody, but nobody was going to fuck with a shop that serves the local Voodoo priests. I really doubt that this had any influence on me finding a set of mogen david stars on a series of votive candles. Bob, who is an authority on stuff like this, says that the design of the candles has become a lot simpler and less ornate that they used to be. They have also become more ecumenical. Basically, any path to god's ear is worth trying.

Hi, You have a wonderful blog.
I have been searching for a way to get in touch with you because I am interested in finding a good vioara cu goarna and from what I have read, you may be able to help me.
My credentials are that I live in the Bronx,
play Irish fiddle, visit Liebman's regularly and my name is Bob.
Can you contact me?
Pqobb@aol.com

Anonymous said...
This comment has been removed by a blog administrator.
9:49 AM

faithhenry said...
This comment has been removed by a blog administrator.
9:57 PM

Anonymous said...
This comment has been removed by a blog administrator.
11:24 PM

Anonymous said...
This comment has been removed by a blog administrator.
10:02 AM

Unknown said...
This comment has been removed by a blog administrator.
10:02 AM