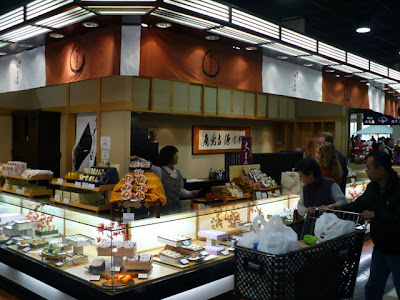 New Jersey famously suffers from an inferiority complex. Located next to the Most Important City in the World, the garden state is relegated to the role of the cheaper housing and shopping zone for the Big Apple. And Jersey is not known for high quality dining in comparison to NYC. That's OK, though. Jersey has better ethnic food. Or at least, anything you can find in New York, but cheaper, and usually more. Take Japanese food... usually considered a pricey date, right? Not in Jersey. Welcome to the Mitsuwa Market! 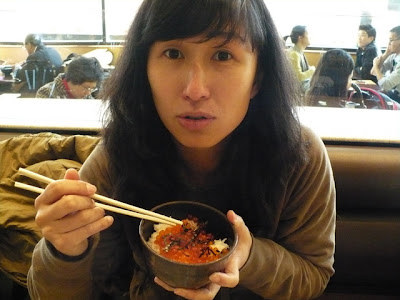 One major problem...I don't drive. I used to drive, but gave it up when Fate, my imaginary friend, informed me that if I continued driving cars He was going to take me to live with Him in the Land in the Sky Where Accordions Are Never, Ever Played. The Almighty kept sending potholes and other cars to smash into my old Dodges and Chryslers. He seemed to have something against me, at least while I was driving. It was obvious that He was trying to kill me so I quit driving cars, many years ago. One less environmental nightmare paying profits into the pockets of King Bush and the Saudi Princes, right? Wrong. Getting around without an automobile in New Jersey is nearly impossible. Luckily there is one bus line near my parent's home that takes us straight to ... the suburbs of Tokyo! 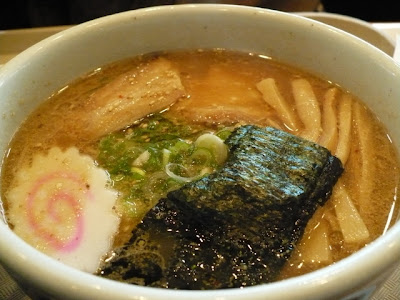 The Mitsuwa Market in Edgewater New Jersey is just a quick hop from my front door, and since I have to worry about the care and feeding of a Japanese S.O. (Significant Other) it has become our gateway to the Outside World. The day begins with bus to Edgewater... then brunch at Mitsuwa Market, and then we hop on the Japanese shopping shuttle bus that runs between Mitsuwa and the downtown Port Authority Bus terminal at 41st St in Manhatten. 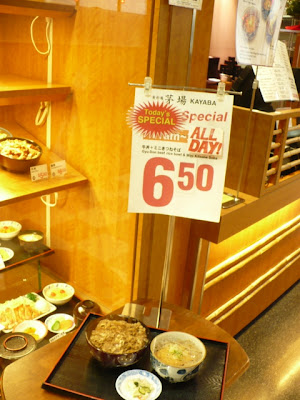 The food court at Mitsuwa feature the stars of the Japanese food court franchise world. The top ramen noodle chain, Santoka Ramen, is so popular among Japanese in NY that they take the bus out to Edgewater just to slurp the noodles of home here. There are several outlets, each offering different styles of Japanese lunch standards - one specializes in donburi dishes, like the tempura don pictured below... 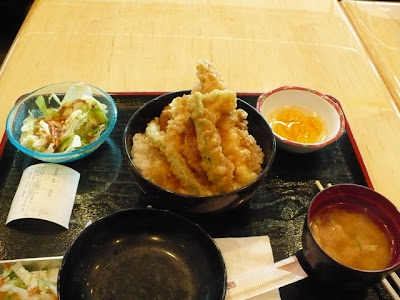 I have become a fan of the katsu, which offers fried foods in a japanese panko bread crumb batter... these are some seriously cheap meals. I have yet to spend over ten bucks, and the lunch specials start at around $6. I can deal with this. 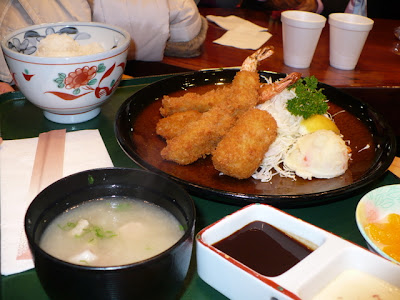 All of the food franchises advertise their menu in traditional Japanese fashion by using picture perfect plastic models of the food... which in many cases are far more appealing than the actual sight of the food itself. There is even a district in Tokyo, Kappabashi, that specializes in plastic food displays. Hey, try making these at home! 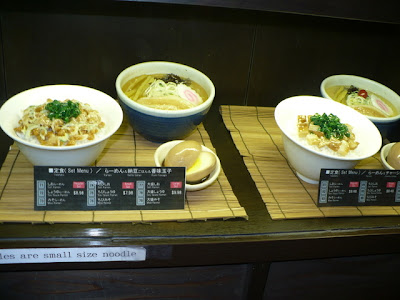 The Japanese version of hamburgers... hanbāgu (ハンバーグ), here served with a line of filling gyoza dumplings. Fumie always goes directly to the hamburger lines, and then decides on either katsu don or ramen noodles... so we have to go back to Mitsuwa on New Years day for the ritual mochi-pounding sticky rice ceremony and a Japanese burger plate... Thousands of Japanese will crowd the market while a bunch of guys in traditional costume whack away at rice. Who says New Jersey is not fun? 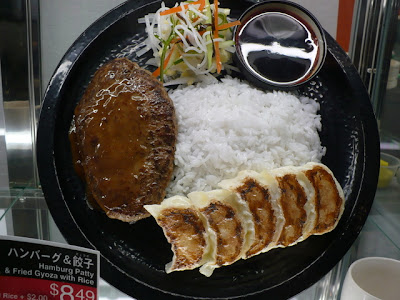 Mitsuwa doesn't have a fancy Sushi bar, but all you need to do is go into the sushi section of the supermarket, and then take your lunch out to the tables in the food court, bento-box style. Most sushi selections are under five bucks... 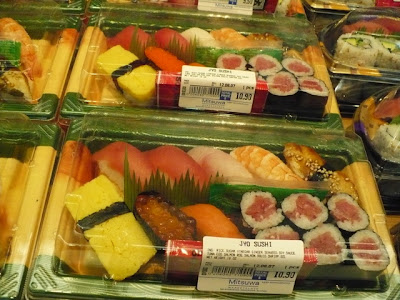 After lunch, fumie goes a bit wild in the supermarket, picking up rotten soy bean natto for breakfast and maybe some glow-in-the-dark purple eggplant pickles on the side. If you can get it in Tokyo, you can get it here, including Japanese toothbrushes and Japanese standard stationary. 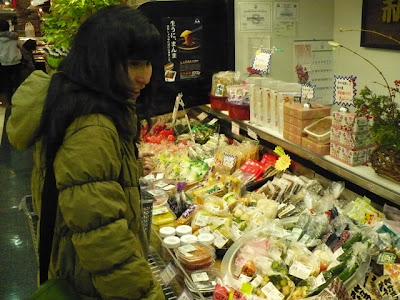 so... all done with Mitsuwa, we can go into the city and head straight for the takoyaki place on 9th avenue behind Astor Place in Greenwich Village. This is a little hole in the wall located on the main drag for hip Japanese twenty-somethings who are in New York for a few months studying English. 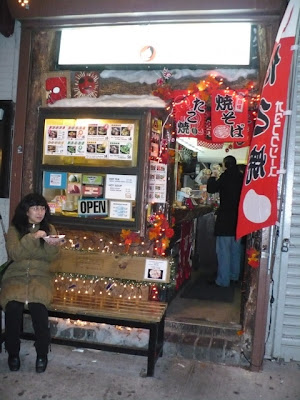 Fumie got all excited when she saw one of Japan's most famous graphic artists sipping coffee at the Starbucks on the corner here... "And nobody even recognizes him here!" Nope. That's probably why he's here. There are a string of izakaya bars and sushi places in this area, which is right near a couple of art schools, and so you need your fried sweet octopus balls when stumbling home from a night of drinking. 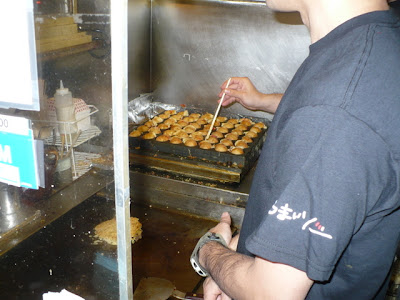 Now, I suspect that you have to have grown up in Japan to be a real takoyaki freak. Basically, it's a fried dough ball with a little chewy bit of octopus in the center, covered in a sweet brown sauce and mayonnaise and topped with dried fish shavings. Kind of hot, gloopy, sweet, and then a little knot of cephalopod in the middle. Mmmmm.... 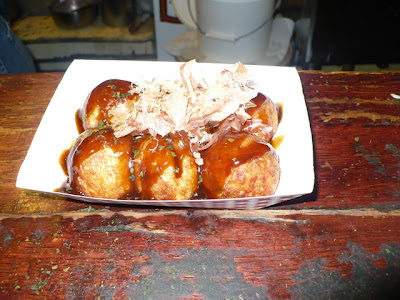