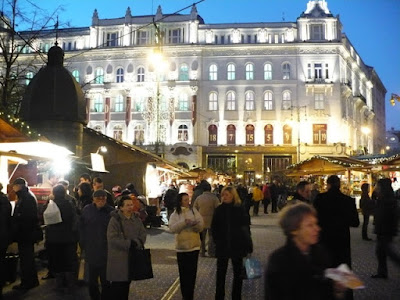 My last two days in Budapest were busy with running errands, such as hustling down to the Christmas Markets set up in public squares to get last minute gifts for the folks back home. The conundrum: what do Jews give each other for Christmas? Well, er.... we give nothing, or at least, nothing but excuses... but that doesn't mean we can't wander around the Christmas markets. I mean, money exchanging hands, small business... you know... it is all just so exciting to us... especially when it is about the only time of the year I feel good about wandering around downtown Pest's Vörösmarty tér, which usually functions only as the unfortunate meeting place of people and pidgeons. 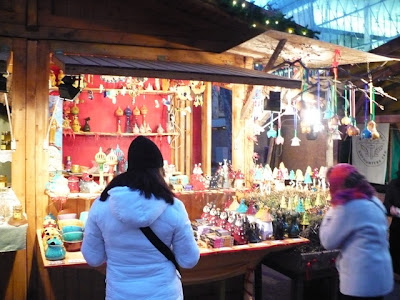 It's a month of chotchkes galore for sale. Folk-inspired items like painted ceramic plates are easy movers, children's wooden toys and folk flutes do a brisk business. Honey cakes - emblazened with Christmas symbols - are a traditional Hungarian Christmas gift, like the ones sold by the honey seller below. 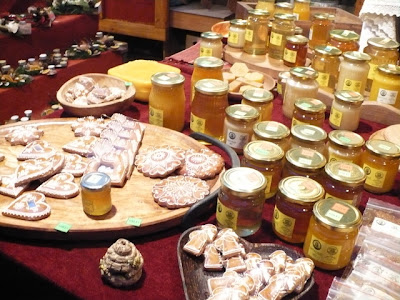 The Christmas markets are actually a huge excuse to overeat any of Hungary's Deadly Delicacies. Give the gift of cholesterol to your loved ones this Xmas season. But take pity on the poor tourists. They think they are just getting an exotic snack, but we can eat this stuff every day of the year in any butcher's shop. Ask any of the healthy, super-annuated elderly folk in Hungary about the effects on health of a diet rich in pastries and pork fat. Many of them have been known to pass the half century marker while consuming a steady diet of sausage and bacon daily! 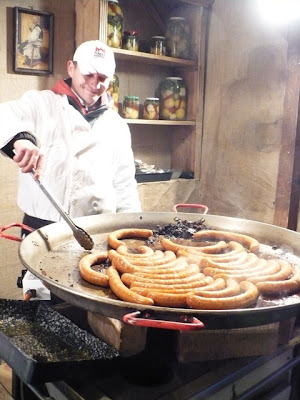 A modest plate of kolbász sausage frying up for the masses. They look great but they are usually kind of dry and mealy, especially if you are comparing them to a Teutonic bratwurst type of pig-pipe. But again, swine stuffed in its own colon is always good. 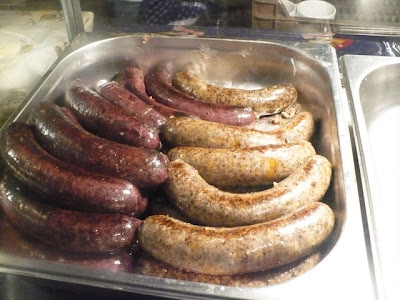 Hurka, blood sausage (the reddish ones) and liver sausage (greyish ones) on display. Real Magyars know that this is the good stuff - if you call it cajun boudin you can serve this in fancy American restaurants for twenty bucks a plate. These are, possibly, my favorite Hungarian symbols on non-kosherdom. Really - if it were not for these, I might stand a decent chance of getting into Hebe Heaven when I die. 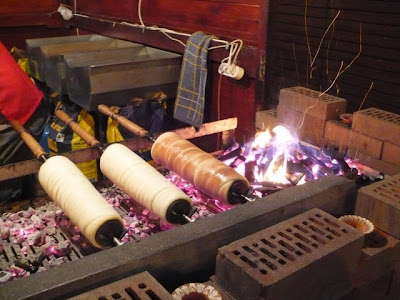 There is no outdoor market worth the name in Hungary without Transylvanian kürtős kalács, sweet yeast breads glazed in sugar and a choice of nuts, cinnamon, or coconut. Of course, at Vörösmarty tér you will pay about FT 1200 for one of these, which is only 100% more than you would normally pay at any other Christmas market around town. 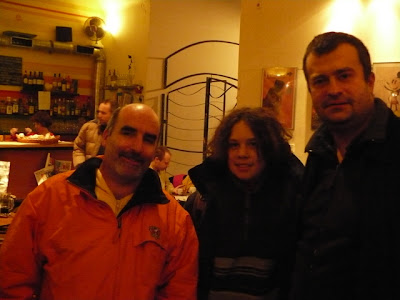 Too much market, needed time out to sit in the Siraly Cafe on Kiraly utca for some tea with Steve Carlson, Aron, and Dejan. Located at Király utca 50 in the 7th district, this is where the cool and philosemitic meet for coffee during the day and palinka at night. Judaica library upstairs, theater in the basement, no official operating license to speak of, this is the Squat to End All Squats, my favorite daytime hang zone. 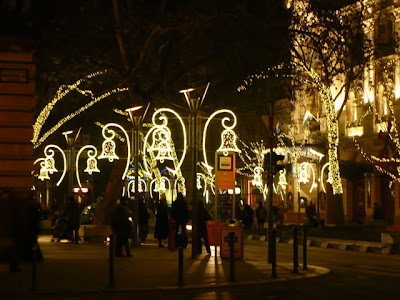 Andrassy ut, Pest's toney main drag, sets up the lights for the seasonal festive feeling, and my son, Aron, takes my digital camera and shows me what he's been learning in his high school photography class. Man, this kid is starting to get some real camera chops! 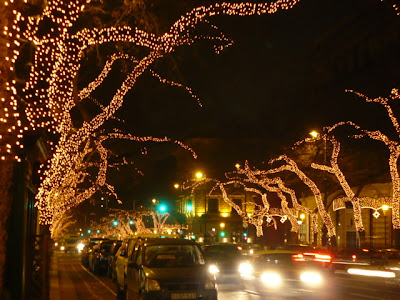 Now I am back in the New York area... picking Fumie up at the Airport later today... and from here on in it is a month of klezmer gigs, deliciously half-rotten Japanese fish on rice, natto for breakfast, chinese noodles, corned beef, and pointedly non-Magyar red wines into January. Stay tuned. 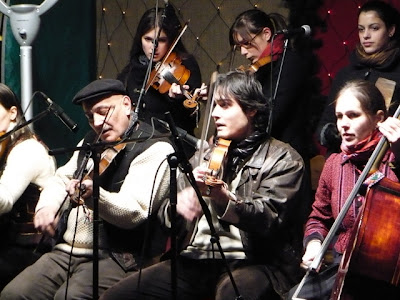 Sándor Csoóri (formerly of Muzsikas, now with "Young Muzsikas") and son... and family... performing at the market. Yeah, it looks like a string quartet but it sounds like the Ramones on palinka. Some of the most energetic Hungarian folk around. Each afternoon has bands playing in folk and other styles while freezing their.... hands... off. Do not miss. A Giter Nitl far ale!
Posted by dumneazu at 11:57 AM