On my arrival back in New York, my luggage seemed to have been stuck in Amsterdam. Being a patient sort of person, I didn't worry... and was told to stay home an wait for its delivery. Well it took three days. Why? Well... we had packed a gift box from Budapest's Gerbeaud Pastry shop containing traditional Hungarian holiday cakes - beigli - that contained one nut cake and one poppy seed cake. The drug-sniffing dogs must have gone nuts over this suitcase! When we opened it up, we could see where the customs officials had carefully unwrapped the cakes, cut into the poppy seed cake, and then carefully re-wrapped the box and sent it on to the next customs stations where the drug puppies promptly would go crazy again... 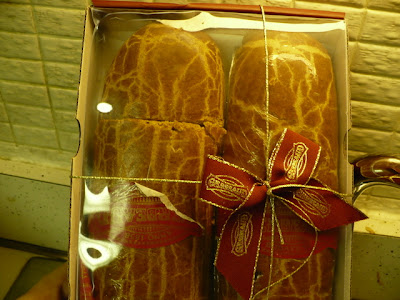 Back in New York with Fumie for Chanukah... the whole city has been up in arms after a supermarket accidentally mislabeled an innocent holiday suggestion in the meat section... this has been on the TV news for a week. Now... just wait for Yom Ha-Lobster! 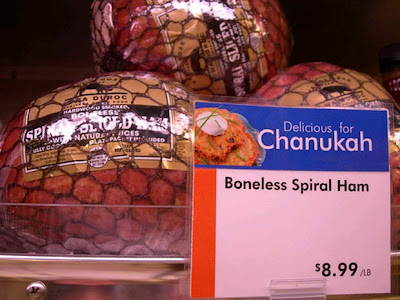 Fumie's mission has been to get her hands on a new Nikon D300 camera... for months the city's camera stores have had them on order, and when a shipment arrives, it sells out within hours. Nikon simply can't manufacture them fast enough. B&H Camera - one of the world's largest and cheapest Photo suppliers, run entirely by a staff of Brooklyn hasids - didn't know when they would get them in again... but 17th St. Photo - another NY institution with virtually the same low prices and also run by Brooklyn hasids - had a few in stock... and here is Fumie with one of the last three available Nikons in the city of New York. 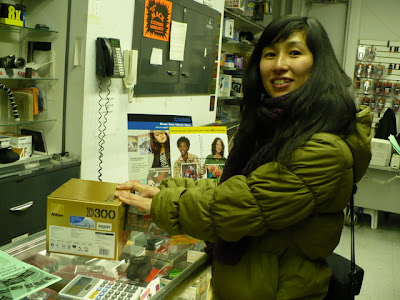 Nikon in hand, we wandered around midtown Manhatten for a bit until the cold drove us indoors to... Macy's Department store at 34th St. Christmas at Macy's was already in full swing. 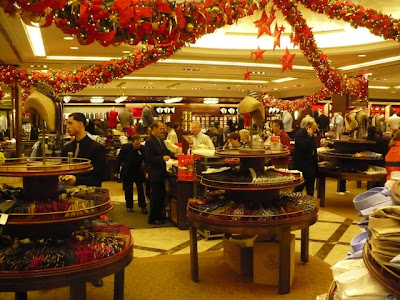 Christmas in New York traditionally meant a trip to Macy's to visit Santa Claus, and Macy's has kept the tradition of providing the most elaborate department store Santa ever since the 1947 film "Miracle on 34th Street." Personally, I would have much preferred to go to the eighth floor of Macy's and sit in Haile Selassie's lap, but in this life we make do with what we have... 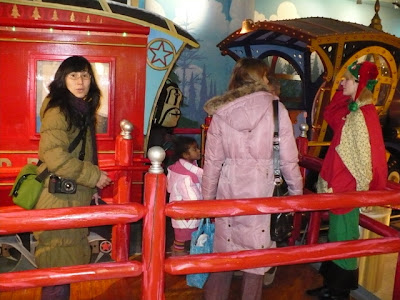 The entrance to the magic train to the North Pole... lots of families, yes, but the crowd consisted of at least 70% fully grown adults such as ourselves, coming to grips with their own Santa fascination in a culture given to ever-increasing caustic irony... Finally, we were assisted by our own personal Elves to Santa's room. "Is this your first time to visit Santa?" asked our Elf. "Actually... I'm Jewish, and she's Buddhist, so we are new to the whole Santa thing." Irony factor at less than 10%... doing well... ahh, now let's sit the Japanese girl on Santa's lap! Irony factor rising ... rising... 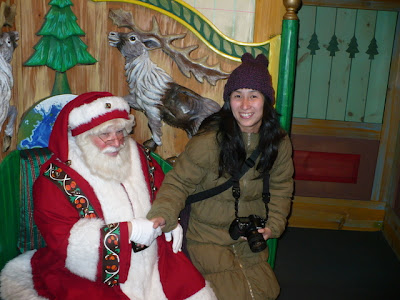 To be honest, I don't think Santa was impressed with me - I haven't really been nice this year, preferring naughty as my main mode of operation - and I don't have much faith that there really is going to be a bottle of Glenlivet Single Malt and a vintage original 1930 National Style O guitar beneath the tree on Xmas morning. I would have to search for religious epiphany in other New York neighborhoods. Cue the F train. Next stop, East Broadway stop in Chinatown. 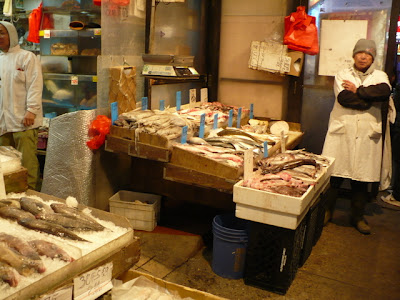 There may be folks who complain that eating well in New York is expensive. I am not one of those people. So far I have had a series of meals under $15 for two people that are as good as any I have ever had. Sure, I may have to share the dining room with the Guangdong Province Noodle-Slurping Chorale and maybe a few megasized cockroaches, but that really doesn't bother me when it comes to Chinese noodle and wonton soups. And this part of Chinatown, off the tourist route and next to the Chinese bus stations, is the place to go. 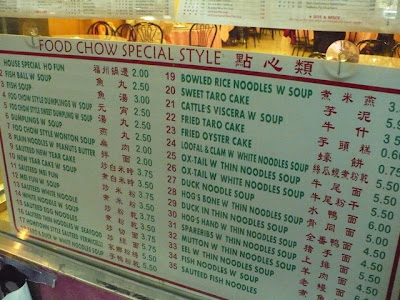 Let's see... Cattle's viscera with soup, $3.50. Maybe hog's hand with thin noodles for a premium $6.00 a bowl? Walking along lower east Broadway near the Manhatten Bridge overpasss we came across the East Corner Wonton Shop at 70 East B'way. A peek in the window was all it took to convince us - experienced noodle masters at work. And half of Guangdong province was sitting inside. 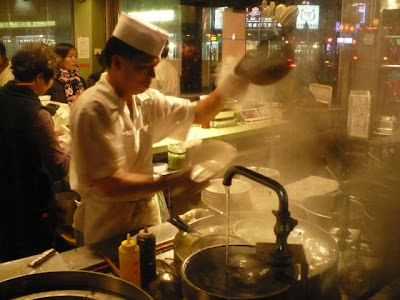 The menu was simple and specialized in what I love - noodle soups, and Chinese roast BBQ meats chopped and served on rice. Excuse me... roast duck soup for $3.50??? And I am not kidding - there is a quarter of a roast duck in there... 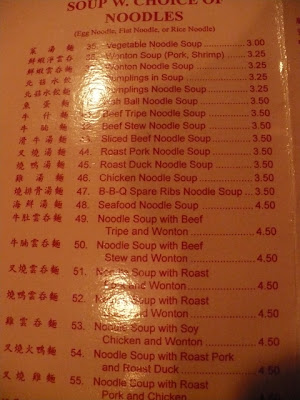 I chose beef tripe and wonton noodles in soup, Fumie went for plain pork and shrimp wonton and noodles, and we shared a plate of roast char-siu pork and roast duck on a small Himalayan mountain of rice at $4.50. "You know that this is tripe?" asked our waiter. "Yes, I like tripe." "But you know this is tripe, OK?" "Yes OK." "And the barbeque is served at room temperature, you understand?" Obviously the waiter had experienced some kind of traumatic experience with clueless tourists walking in off the street and accidentally ordering the screamingly disgusting assorted soup plate. But as we all know, when the Chinese waiter tells you "You no like that" then that is exactly what you want to eat. Works every time. 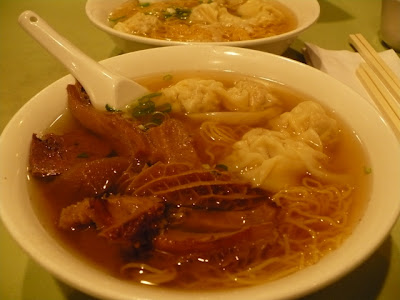 Take your girlfriend out to a sit down meal in Manhatten and walk out having paid $12.50. What's not to love? This was so good the problem will be to try eating at other soup joints in the area without automatically heading back to this one. 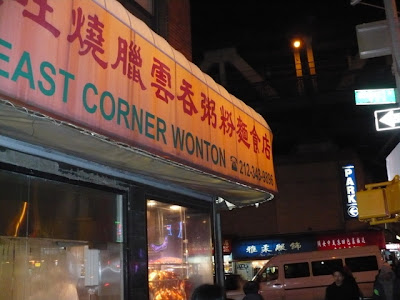 On this the last night, Happy Chanukah!
We never fail to learn something or laugh out loud when we read your blog or - as tonight - both!
Thanks!
;o)
- Lee