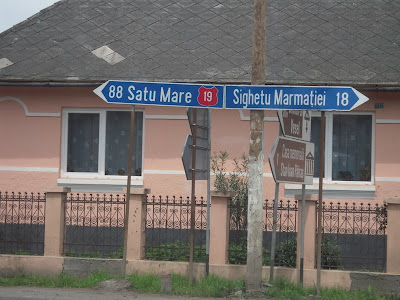 Sighetu-Marmatiei, also known as Sighet (Sziget in Hungarian, Siget in Yiddish, Si'het in Ruthenian) is a small town in the Maramures region of Romania, smack dab on the river Tisza border with the Ukraine to the north. If known at all in the West, it is usually because of the fact that writer Elie Wiesel was born there, for Sighet was once one of the most Jewish of all cities in Europe. 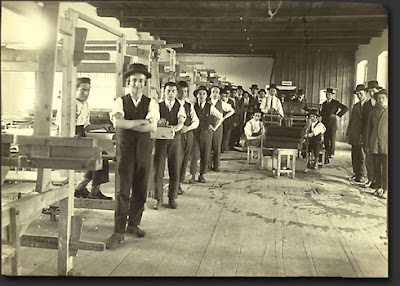 Before WWII a third of the city was Jewish, and Jews uncharacteristically worked the land as peasant farmers in the countryside. The culture of Maramures, and of Sighet in particular, resonates with the influence of Yiddish in the local dialect, the local food, and the music of Maramures. Of all the cities in east Europe that I have visited, Sighet most strongly acknowledges the losses of the Holocaust: immediately after the end of WWII the bars of soap made from Jewish corpses in Auschwitz were buried here, and today a monument prominently marks the spot. 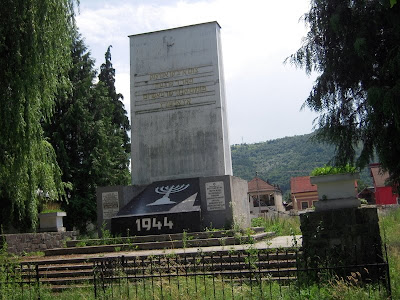 Di Nayes were invited to play a festival of Jewish Culture in Sighet, and so we crossed the border at Satu Mare and headed east up into the mountains. Satu Mare was another town and region that should be familiar to folks involved in Jewish culture: as Satmar, the hasids of this region continue to maintain their faith and customs, but in Williamsburg, Brooklyn and NY suburbs like Monsey instead of the Carpathian mountains. When I began visiting the town and region to collect Jewish folklore in the early 1990s, there were about 200 Jews left in the Maramures region - before 1989 there were almost 3,000. As soon as the Communist regime ended, most emigrated to Israel or the USA. Today there are hardly enough Jews to keep a minyan of 10 going at the refurbished Synagogue. The festival was mainly dedicated to fostering education about Sighet's Jewish heritage and providing a meeting for many of the Sighet Jews who visit their home town from Israel each summer. One thing that Maramures will always be cherished for among Jews is the memory of its home brewed fruit brandy: palinka, tsuica, or horinca, as the thrice-brewed top quality stuff is known around these parts. 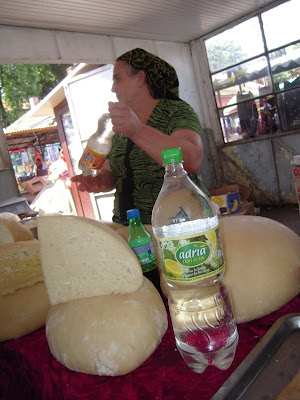 You can get it - bottled in plastic soft drink bottles - from the cheese sellers in the marketplace. I don't believe the EU cares for the practice of selling home brewed white lightning, but screw them. At 10 Romanian New Lei a liter (about $3) you can be sure of no hangovers and you are drinking the stuff that fueled hundreds of hasidic l'chayims over the centuries. In Maramures they drink a lot of horinca. Every social situation calls for a toast, and little plastic bottles of clear liquid appear out of nowhere to make any occasion. We also stocked up on straw hats in the market. 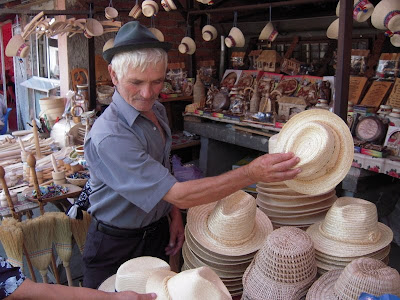 Maramures peasants traditionally wear small little hats called clop (visible hanging in the background) while city folk wear more normal hats, but everybody wears a hat. Nowhere in Europe does traditional dress persevere as in Maramures. One reason has its origins in the persecution of the Communist years. Maramures has always had a social structuire in which certain villagers were considered "noble" - not by wealth, but by status. When the Communists tried to punish this class - by closing churches and redistributing their land - the response of the local Maramures peasants - the morosani - was to retreat into the fortress of their traditions. 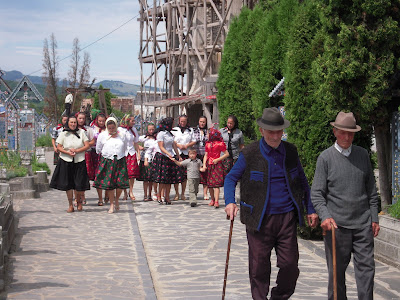 Wearing a furry vest and a tiny straw hat became a mark of defiance that persists to this day. In Maramures, local identity is proudly maintained: to be oameni bunii,, "good people" is the goal of any morosan. That means earning a wage at hard work - often abroad on construction sites in France and Italy - and being as self sufficient as possible at home. It means being a devout church going Orthodox or Greco-Orthodox believer: I've never met a morosan atheist. Another key identity symbol is the local musical style of Maramures fiddle and guitar music. 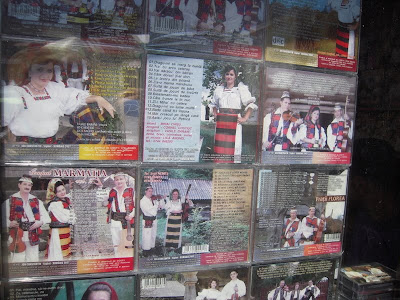 This is what was on offer at the CD stand in the marketplace. No place else in Romania offers this much of its regional folk music on a commercial level - and there are still loads of fiddlers "ceterasi" in all the villages. In Maramures most of the commercial recording are of peasant or trained musicians - the Gypsy clans (mostly families named Covaci and Baranyi) that provide music rarely make recordings. Most musician families don't like being called "Roma" at all - that is reserved for the Kalderash clans that speak Romani and do business in the marketplaces. 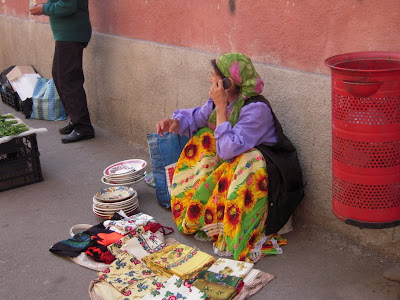 Typically, Transylvanian Gypsy musicians refer to themselves as "Gypsies" - "cigány" in Hungarian and "ţigan" in Romanian, which irks outsiders who have convinced themselves that Roma is the only proper term for Gypsies. When speaking to musician Gypsies in Romani, however, they will say "Rom" referring to themselves, but outside of their dialect they would see the term restricted to the more "classic" Kalderash and Lovara Roma. While we were in Sighet we were put up at the very classy Perla Sigheteana Hotel, the same hotel where we played for the wedding of the owner's daughter about eight years ago. They served the best tripe soup - ciorba de burta - that I have ever had in Romania. 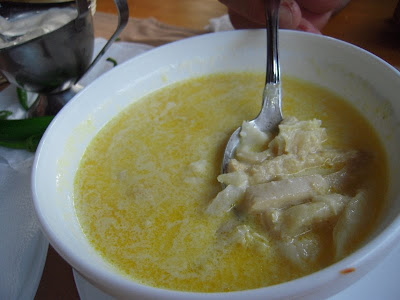 I ate this stuff twice a day: believe me, this is the Romanian breakfast of champions. They served it with some fantastic home baked crusty bread and the classic ciorba accompaniments of sour cream and hot peppers. The sour cream was a thick, luscious cream from the milk of water buffalos, so thick you could spread it on bread and eat it like cheese or clotted cream. And everybody proceeded to do just that. 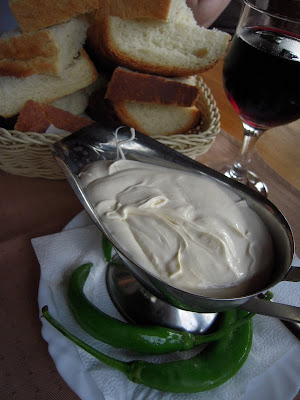 I really enjoyed the Hotel Perla Sigheteana where we stayed - they have a beautiful garden area for outdoor lunches and if you are ever staying in Sighet this is the place to stop. We played for the festival reception dinner the night we arrived, and although the festival as such was tiny and not entirely a festival, it ended up becoming a miniature workshop for players of the small cimbalom, with Australian Tim Meyen in attendance alongside Shaun Williams, an American teaching English in the Ukraine while learning Hutsul cimbalom music, the Tecso Band's Vasile Hudak on Hutsul tsymbaly, and our cimbalom player Feri - who used my small hora cimbalom on this tour because he had transportation troubles with his big cimbalom. Here's a taste of Tim Meyen jamming with Ivan Popovich:

I discovered your blog only this week and it is amazing. love all your posts! only one small comment: in Romanian language "tigan" is a very pejorative term used by non-Roma as the ultimate insult (it actually means slave and brings back the 500 years of slavery, not to mention the exotic construction of the gypsy in Romanian culture). As a Romanian, I would never use it (for having these connotations) but maybe for a Westerner is not so problematic. I do not know so much about "gypsy" in English (but from what i understood is still sterotypical/pejorative and American and British Romani communities reject it as such)...What is more interesting is the usage of "gypsy" (the English word in Romanian) by young people, in Cluj for example, as a word for glamorized gypsy (Madonna style) but also for Roma musicians that are popular (Fanfare Ciocarlia, Taraf de Haidouks etc.). anyway, thanks for your research and posts!

Hi, can you email me, I have some questions i would like to ask you about Sighet etc. p.culture@hotmail.com thanks, Donna