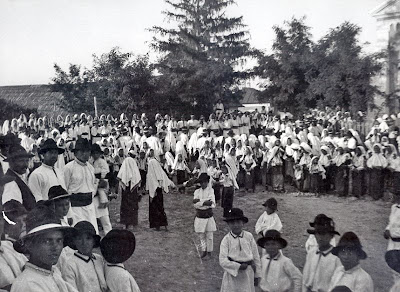 This is the first August that I am not away from Budapest in along while... in fact, August marks the first anniversary of this blog, which got its humble start documenting just about everything that Fumie and I ate in Istanbul last August. Since I am here, and not there, I'll just dream about where I'd rather be... perhaps in Moldavia? No, not the Republic Of. The Romanian part. All my buddies are over there now, at one of the many festival/teaching camps taking place in the Csángó villages along the Seret River valley south of Bacau. The Csángós are among one of Europe's most stubbornly traditional peasant cultures, the last stronghold of an old self sufficiency that was born out of poverty and isolation, and preserving a rich folklore and unique self identity. 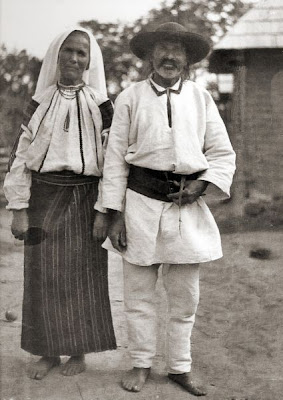 The Csángó (Ceangai in Romanian) are a small ethnic group defined by their Roman Catholic religion in an otherwise Romanian Orthodox dominiated western Moldavia. Most Hungarians would outrightly call them Hungarians, or Csángó-Magyar, but in fact only a minority of Csángós now speak the Hungarian language. The policy of the Romanian Catholic Church diocese in Iasi has been to send only Romanian speaking priests to Csángó villages, leading to the eventual disuse of the Hungarian language in most Csángó villages. The side effect has been that among these villages some of the oldest Hungarian folk beliefs maintain themselves to this day. The northern Csángó villages such as Saboani/Szabofalva, speak an archaic, nearly medeival dialect of Hungarian, nearly unintelligible to Magyars from other regions. 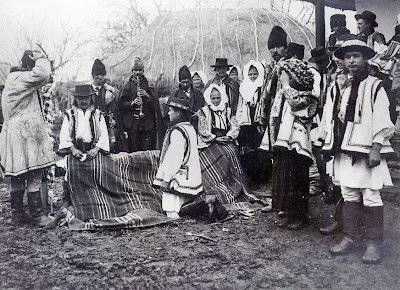 The subject of Csángó identity is a hot one for nationalist types in both Hungary and Romania. some Magyar opinions have them as remnants of the ancient Hungarians who never crossed into Panonnia, leftover Huns from Attia's hordes, or the modern descendants of the old Cuman Turkic tribes. Some Romanian authors claim they are actually Romanians who assimilated into Hungarians in medeival Transylvania and later migrated east. I go with the theory accepted by most ethnologists in Hungary, that the Csángó probably are the descendants of military settlers sent into the region by the Hungarian Kings after the devastation of the Mongol invasions and the destruction of the former Kingdom of Cumania. Later, more Magyars came into the region from the Székely regions, as well as Hussites, founding a string of settlements south and west of Bacau. [The following photos were taken by Fumie Suzuki.] 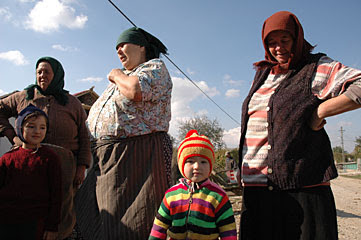 Two years ago we were traveling with Australian musicians Pip thompson and Tim Meyen around Romania and decided to drop in on Szabófalva, historically the largest northern Csángó village. Pip wanted to buy some Csángó folk costumes. The way to do this is to drive around the back end of the village looking for old ladies. Since the Csángós, like most Moldavian peasants, live behind high walled fences and are generally suspicious of outsiders, this takes a while. Finally we saw some old women working on the street, so I jumped out and gave a small speech in Romanian: "We are ethnographers from abroad, and we are collecting folk costumes, and as you know, the costumes from this region are the most beautiful in Romania" (at which point everybody agrees...) "And I would like to ask if any of you might know anybody who would be willing to sell us any for cash?" 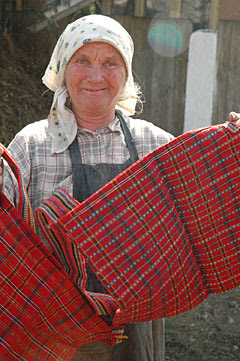 "Well... just wait here..." said one old lady, and sure enough, within a minute everybody had dived into their laundry chests and brought out the old dowry pieces. It used to be the custom in Csángó villages to make an entirely new set of dress costumes for each Easter, and then set it aside as a dowry. The younger generation wants more modern weddings, so most older woman have a chest full of weavings and embroidered costumes mothballed away. Old folks don't get many opportunities to pick up extra cash in these remote areas, so soon the street was full of old Csángó women trying to make a sale. 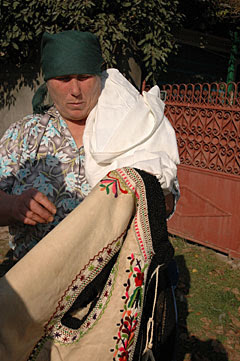 Up until this point we had spoken in Romanian, but when the time came to discuss prices... they switched to their "secret language" - Hungarian. They were a bit surprised when we joined in speaking it - most Hungarians who come to the Csángó territories do little but bemoan the state of the Hungarian language and spend most of their conversations correcting the "bad" Hungarian of the Csángó dialect. Our Jeep driver, from Kolozsvar, did just that, and since he was such a frigging numbnut the whole trip, I sent him back to sit in the truck and leave us alone. 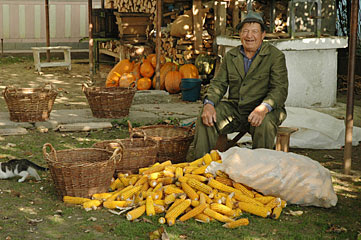 Our next stop was the neighboring village of Pildesti, aslo called Kelegyest. Pildesti was formed as a satellite village a couple of kilometers from Szabófalva, which was already grown to populated in the early 20th century. Szabófalva's church was dominated in the pre-WWII perod by a Father Robu, who was universally loved and respected but also strongly anti-Hungarian language and pro-assimilationist, and is usually held as the main cause that only old folks in Szabófalva still speak Csángó Hungarian. In Pildesti, which had its own church and thus no Father Robu, estimates are that about 80% of the village speak Hungarian. We simply walked among the walled yards until we saw one gate open, and called in Romanian to find a happy old fellow shelling corn. Turned out he spoke Hungarian, as did his wife and twenty year old son. Not only were they happy to sell us some woven bags, they ended up giving gifts to Pip and Fumie and of course we couldn't leave until we tried some home made wine. 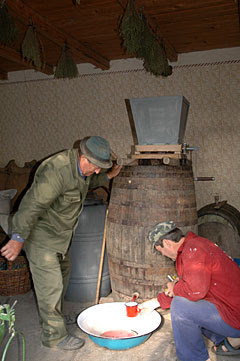 Csángó musical traditon is very much alive, and is one of the most successful cultural exports among Budapest's folk music scene. The Csángó region is one of the last bastions of the cobza, although it is probably become outshadowed by the local brass band scene in Moldavia - when there is a wedding in Szabófalva or Pildesti, they call one of the brass band Fanfaras from Zece Prajini, about fifteen kilometers away, home to Fanfara Ciocirlia, Fanfara Savale, and Fanfara Independenta. 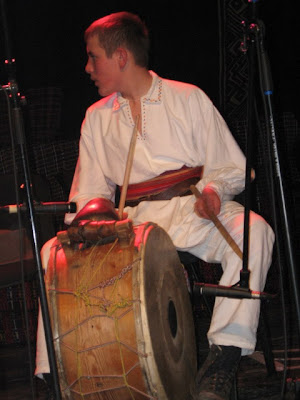 Still, there is a lot of Csángó music on the net. National Geographic's website has some in an interesting feature, as well as downloadable dance music from Budapest's Tatros, and of course the Moldvahon Music Portal serves as a primary resouce offering field recordings of music mainly for the zillions of young Hungarian flute players who want to learn to play at the Csángó dances. If you are ever in Budapest, check out the Thursday night dance house at Almassy ter for more of this: 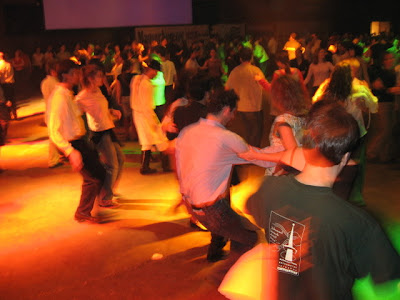 i just red your post and i was immedeatly tempted to leave a comment. i'm from szabofalva, not a native, but my parents are. i lived there like 7-8 years, and all my summer vacations in my childhood were spent in there. beautiful time, not only for being a kid but for the simply and still almost medieval live that people had. unfortunetly things had changed since, and all the traditional values are in great danger, espeacially "the secret language". no one use it anymore, except an always reducing number of oldmen; no young man seam to be intrested in it, sad but true.
i decided to go back there, to go back home(i now live in italy), and start this beautiful project, a blog in wich i'll try to post daily lessons of csango language as taken from old people. i'll post photos and dialogs and everything i'll encouter related to my ancestors and their culture.

Romania is a beautiful country but the people are stupid because is not protect the country from wise guys and keep it clean.Respect.

Kelegyest? Where did you get this name?
I was born in Pildesti and I never heard this name.
Csángó folklore is identical to Moldovan folklore so don’t even try to make it Hungarian.
Half of the people in Sabaoani lost the Csángó language since 1950 but people in Pildesti did not until today.

Kelegyest? Where did you get this name?
Umm romanian Wikpedia e.g.?