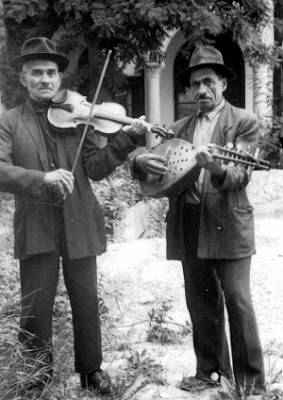 As a musician, I'm as much of a gear-head as anybody. I can talk for hours about the tone differences in National resonator guitars, vintage Gibson mandolins, skin vs. plastic drum heads for Turkish davuls, and yet the instruments I make my living with include some of the most primitive honk-machines in the history of organology. Tomorrow I have to head out to do a gig with Muzsikas... and that means cobza, the king of dodgy stringed instruments. Fretless, difficult to handle and play, virtually untunable, but nevertheless funky as dirt... 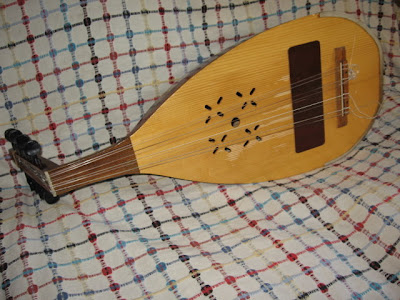 Cobza, or kobza, are Romanian lutes - although today their main use is in the Hungarian revival folk scene and everybody calls the by the Hungarian term koboz (everybody except the people who still play them in Romania...) The instrument looks like an oud that was left in the wash machine and shrunk. In terms of tone... well, a good cobza functions like a drum machine - either knocking out driving east Balkan dance beats or picking out the intricate background rythyms (tiituri) patterns of Romanian lautar music. The problem is, there really aren't many good cobza players left. The cobza is an instrument that is dying out fast. Recorded examples of Moldavian Csango players of cobza were made during the 1950s and early 70s, by which time you could hear that the players had already lost their skill. 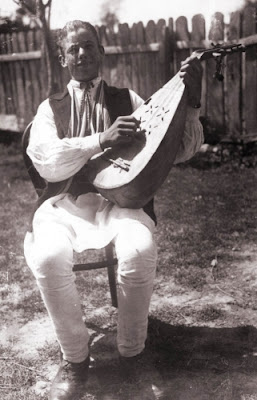 Originally the classic instrument of the Romanian Gypsy lautar musicians, the cobza is probably a 17th century adaption of the Turkish oud. The word comes from old Turkish kobuz - the term means "string instrument" in most Central Asian Qipchak Turkish dialects - which survives in modern Anatolia as the kopuz, an ancestor of the modern baglama saz. One of the first noted Romanian Gypsy musicians was Barbu Stan, who became famous as Barbu Lautarul and inspired Franz Liszt's Romanian Rhapsody for Piano. One of his songs survives in the Lautar repetoire sings Eu sunt Barbu Lăutarul / Starostele şi cobzarul "I am Barbu the Lautar/The old Man, the Cobzar" The cobza's function as an accompanying instrument went first to the small cimbalom, where the loopy rythym patterns of the cobza became the basic patterns of the Romanian lautar style cimbalom. The cobza, at least was much more portable. 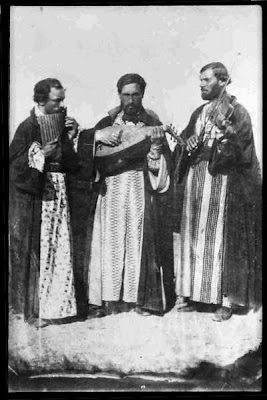 By the mid 20th century the small cimbalom itself was being replaced by the accordion, and today one can count the number of real cobzari in Romania on one hand. Another problem is the difficulty in obtaining a good instrument. The Hora instrument facory in Reghin made good ones before discontinuing the model around 1986. Today they manufacture something called a cobza which is smaller and is made as some kind of unplayable souvenir instead of a working instrument. The only way to get a decent older cobza today is to ask among families of musicians who might have grandpa's old one stashed away. And no - I can't help you get one. I had a good one that I traded off to Klezmer Tuba King Mark Rubin a few years ago. I haven't found one as good since. 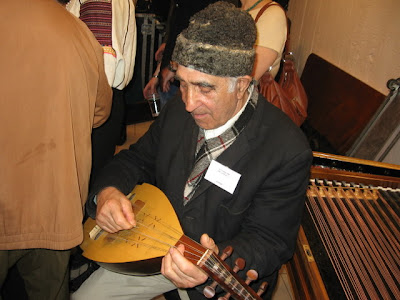 Above is Ioan Antim from Onesti in Moldavia, who also plays small cimbalom. Antim may well be the last cobzar - Constantine Negel from Botosan died two years ago, as did Vasile Paun of Bacau. This year one more player turned up from Bacau, hired to accompany Aurel Mandache at the annual Csango Ball in Budapest. 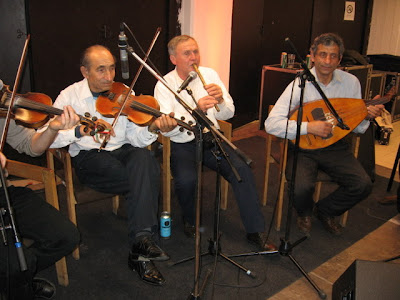 A real cobzar was often a noted ballad singer, as was Ion Paturica, the last cobzar in Clejani, the town that was to give us the Taraf des Haidouks Orchestra. Around 1960 most bands still using cobza in Wallachia started to switch to the guitar, which is still used today by most lautar orchestras in Romania, particularly Bucharest (the guitar has pretty much replaced the cimbalom among Hungarian Gypsy bands in Budapest resturatnts as well.) At the beginning, guitars were restrung and retuned to adapt to the cobza's playing style. 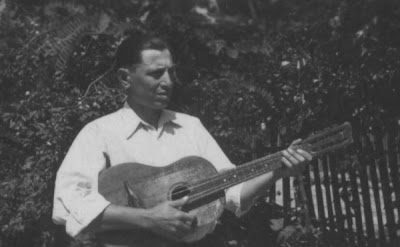 The great lautar bands of Bucharest were the last preserve of cobza, such as the Gore Brothers' band that accompanied Romica Puceanu in the 1960s. These come from the esteemed Ethnomusicologist Robert Garfias' web site, which includes a good page of his Romanian field recordings from 1977, including some burning cobza-fiddle duets from Suceava (bottom of the page.) 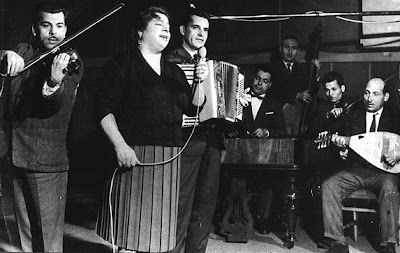 In my band we use the cobza to play certain older styles of Moldavian Jewish music. Itsik Svarts, the late Moldavian Jewish writer and theater director wrote of a band in his shtetl of Podoloy (Podu Illoiae) which played at Purim consisting of violin, flute, cobza and drum. He also quoted a Scottish missionary to Moldavia in the 1820s who was entertained by professional Jewish musicians playing violins and cobza. 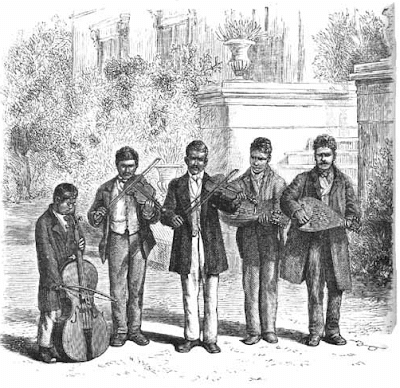 But the clincher was this mural we found in the Apfel synagogue in Iasi - a Jewish artist's conception of the heavenly orchestra in Zion, dated about 1824. The Apfel Shul is used by the Iasi Jewish comunity as a warehouse to store the belongings of the dead - we had gone there to retrieve Itsik's Svarts' personal and family papers for his surviving family in Toronto - and Fumie found this fresco hidden behind a large dresser. 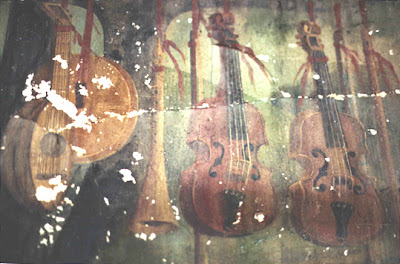 What we have here is a cobza, a flat drum (balaban) a zurna (predecessor to the clarinet) a couple of fiddles, and a long flute, which the artist probably based on a Moldavian caval. As klezmer ensembles go, I would have loved to hear this one, but it was painted a good 80 years before there was any recording technology so the best we can do is guess. A bit of Moldavian music played at last year's Budapest Csango Ball by Antim Ioan (cobza) and Tudor Bogdan from Sterjarul, with Felix Benke on drum. Also from the Csango Ball, Aurel Mandache and Band.
Posted by dumneazu at 7:11 AM

Other than that, good stuff and thanks for posting it.

Thank you for this very interesting history of the cobza. Very informative and very knowledgeable.

The cobza is not only being used for rythm work, although the short neck does make anything else but that rather difficult. Check out the likes of Ion Zlotea, Tudor Ungureanu and Tudor Gheorghe (lots of clips on Youtube) for some impressive Cobza melodies.

Check out Violeta Zaplitnii on the fretted cobza (almost a short-neck bouzouki) for some cool jazz voicings! http://www.youtube.com/watch?v=jbh99omJdug

Thank you for your blog. I am searching for a photograph for use in a museum exhibit (300 dpi) of a traditional Moldova kobza player to accompany a koboz tuned after Vasile Paun. Do you have any photos of him playing that we could use? Otherwise the image of Ioan Antim from Onesti would be nice, or perhaps one of Constantine Negel?
Any assistance would be appreciated. Thank you!

I've recently purchased a Cobza, though I can't find a resource for strings in the US. Does anyone know the gauges so I can make up my own or where I might purchase strings? Mine has 10 strings and a few tunings would be awesome as well. Thank you.

This is some great info, thanks for writing this. I know this is an old post by now, but there seems to be various currents in cobza playing that are searching for new directions. I've noticed a number of younger players on youtube using oud strings tuned in 4ths. This gives it a mellower tone better for melodic playing. Check out Szlama László especially. This seems to be happening more in Hungary.

I recently bought a cobza from Hora in Reghin via the internet: they must be making them much better these days. It's not the easiest instrument I've ever tried to play--the action's a bit high and I think this puts the octave strings slightly off-tune when stopping them though the open strings are perfectly in tune. But with a little adjusting it's okay. I of course can't compare it to older instruments since this is my first experience with it, but it's definitely better than what you describe!

Christina, Cincinnati,
I filmed Paun Vasile in the late 90-s and have some photographs of him too if Bob not have.
I live in California.
regards, Ferenc Tobak

Dear Ferenc, My post was years old. I no longer am looking for the information. But thank you very much for your post! Best, Christina