Longhorns and Buffalo: Home on the Range! 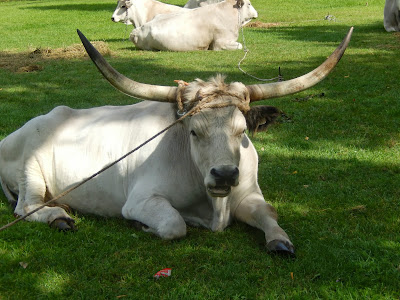 It is good to be back in Budapest. As we say in Hungarian "Itt az élet, ott a pénz": Life is here, money is there. Its impossible to compare Hungary and the USA, or Budapest and New York. One has the world's best pizza, the other has the world's best poppy seed buns, if you like that kind of thing. New York has a world class opera. Budapest has an Opera as well, the best of its class to be found in the sixth district. Housed in a beautiful building, did I mention that? New York has a vibrant nightlife. So does Budapest, if you like going to the seventh district "partyzone" to watch crowds of Belgian and Australian twenty-somethings engaged in spontaneous mass barf-o-thons on the pavement of Király utca. I prefer our life just out of the city center. As long as the weather holds I'll drop by for a frőccs at Kertem, the ramshackle garden bar in the City park. And every few weeks some festival sets up on our doorstep. Last weekend it was the "National Gallop." Yes, that's what they call it. The honchos at Peter Geszti's ad agency decided that this was perfectly good English, since it works in Hungarian, right? "Yo, dude, wanna head off to the Gallop?" I have covered this Horse-Hun-Hussar Hayfest before so I'll give it a pass this year. This year, we visited the Grey Cattle Festival. 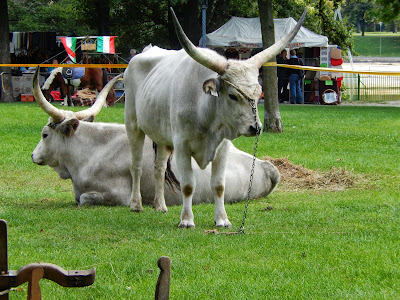 Grey cattle are a traditional Hungarian longhorn cattle variety that is usually associated with the wider open spaces out on the Great Plains, especially around Hortobágy. The problem with longhorn cattle is, well, long horns. Settle them down in nice protected barns and they require lots of space and are quite likely to stick eat other in the eye with their cutaneous protrusions. Hungarian cowboys lived out on the reedy puszta for months herding the fattened cattle before driving them across Hungary to market in Vienna. It must have been an impressive sight. Small wonder he blue shirted cowboys in their distinctive hats became a national symbolic image of Hungary long before LOL cats and " mai nápi cukiság." Incidentally.. most of these guys are not actually cowboys. 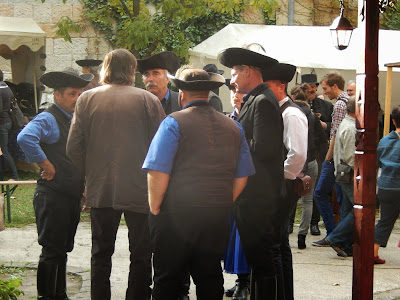 My guess is High School teachers and civil servants in small towns. I hate to use the term "Goulash LARPers" but essentially, it is what it is. Traditional cosplay is big business in Hungary. It can lead to interesting juxtapositions: the traditional colorful cape worn by Hungarian herdsmen is called a szür and very few craftsmen still produce them - making them rather expensive indeed. However, across the border there are still some szür makers operating in Romania, where - even in this digital age - shepherding is still a viable career option. So you can still get a szür there but... in classically striking Romanian folk design. 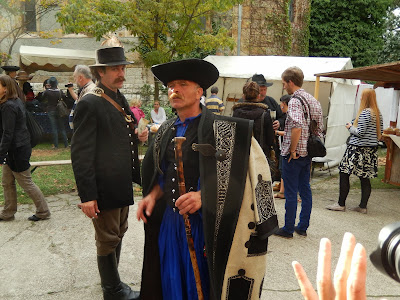 Notice the black and white embroidery, which is the style for Romanian ethnic decoration in the Bihar area, as opposed to the colorful, tulip shaped embroideries of the Hungarian style. Hmmm... perhaps nobody will notice. Oops. I just did. Another pressing question: the hats. The brim sweeps upwards. Which is really impressive and unique - when you see somebody wearing one of these you can be pretty sure they are Hungarian. But what do you do when it rains? It is like wearing a water collection trough on your head. Pour out the rain every five minutes? I know its not really an issue, but... it raise one's curiosity. Grey cattle are one of the local products known as "Hungaricum"... which means... something uniquely Hungarian. (I will not parse the spelling of the term any further. I promise.) Another is the mangalica wooley-haired pig, which gets its own festival in January. But horny cows does not a real MooFest make, so there were also a herd of my personal favorites, the water buffalo. 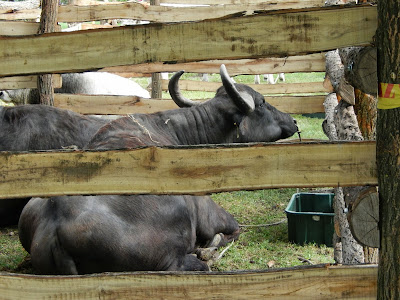 Yes, they look a bit out of place here, but in fact water buffalo have had a verse of Old Macdonald Had a Hungarian Farm for centuries. Today they are increasingly hard to find in Hungary itself: Hortobágy has a herd of them, as does some areas around the Balaton, but if you go to Transylvania you can see a lot more of them, often blocking traffic in villages as they slow dance their way home from a day soaking in the mud of the river. They produce the best cream and sour cream in the world. Was that hyperbole? No, just stating a simple fact - if you have dumped sour cream into your tripe soup in Transylvania you probably recognize the creamy richness of buffalo juice. I have never eaten a water buffalo, however, before this festival. And there it was on the free sample tray: water buffalo. 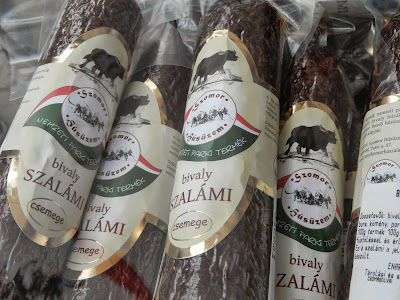 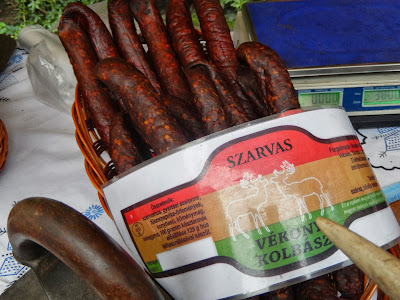 I still have a full stick of this spicy deer sausage in the fridge: a little goes a long way. The surprise was that even though we were in a tourist infested Goulash LARP encampment, the artisanal goodies on sale were priced pretty much the same as any kolbász on sale at my local market. Looking back, it is a pity I didn't buy more. You don't often find small producer products like these in Budapest. And now for an apology: Sorry for the sparse postings of late: I have some paying work on my plate at the moment, and as many know, writing for money is much more attractive than writing for no money. As soon as I have time I have much to catch up on from my summer travels to the states...
Posted by dumneazu at 6:28 AM

Another fantastic entry. I don't think I could ever tire of your blog. Glad you've got a paying gig but definitely looking forward to more of your writing when it fits in..
Come visit Maine sometime!
Peace,
X.

If you haven't been to the Bp Opera in a while, the average quality of productions has improved in recent years, and I think it's safe to call it a borderline member of the club of 40-50 world-class opera houses, especially for a company opera, as opposed to the (somewhat overrated) Met or Wiener Staatsoper, which fly in their guest principals from all over the world. It's still possible, though, to see a performance that can only be considered the best in the 6th District.

The world in which you don't have constant paying work for your writing is a world that has its priorities all wrong.