Christmas in Budapest - or Yambol?

Looks like we are staying in Budapest for Christmas this year. Somehow I have managed to be out of Hungary for most of the last few years at this time of year, and I am pretty grateful for it. Hungary shuts down for Christmas like no other country I have ever seen – although I have heard this is true of other Central European countries like Austria and the Czech Republic. 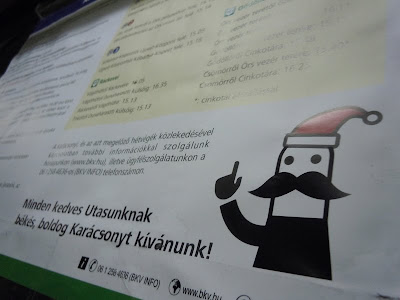 Starting on Dec. 24th families cocoon themselves at home, speaking to no outside, making no telephone calls, going to no parties. They stuff themselves on carp (yes, carp) and light actual candles in desiccating fir trees in their living rooms. And on Christmas Eve Hungarian children open their gifts, which do not come from Santa's workshops at the North Pole. They come straight from the Baby Jesus his own self! 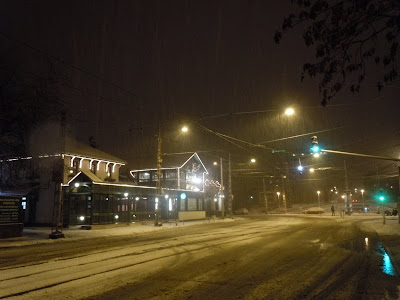 Contact with anybody outside of the family is strictly off limits in the home for at least three days. If you are not a participating member of a Hungarian family, you get to wander empty streets that look like a scene from some post-apocalyptic movie … where are all the people? What happened here?… The options are narrow – the traditional Jewish Christmas at a Chinese Restaurant (some stay open, and I'm not telling which) or dinner at Uncle Tom’s Annual Orphan Xmas Dinner. 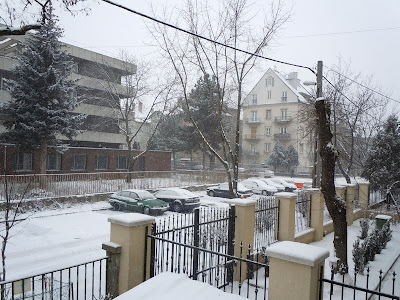 Since there is no public transport on Christmas Eve in Budapest, and very few taxis, we are hoping for mild weather so we can bike to the Annual Ex-Pat Orphan’s Xmas Dinner, but Budapest has been covered in snow for the last few weeks and Christmas is no time for extreme sports. And to think that a few weeks ago I suggested to Fumie that we spend Christmas in… Yambol, Bulgaria. 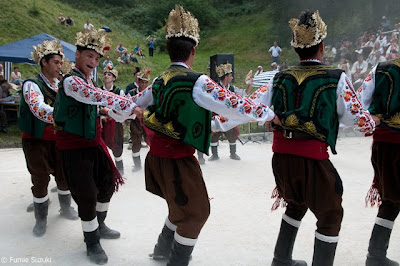 Yes, Yambol. Why? Because they have the most vibrant koledar tradtion in the Balkans. The Koledar are dancers who perform publicly at Christmas – their name, Koleda, is synonymous with Christmas carol – but they have roots in even more ancient martial dance traditions closely related to Morris dance. 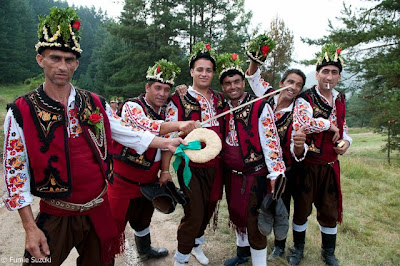 The term “Morris” dance refers to “Moorish” and throughout Europe there are dance traditions of men performing with swords and figures of the Fool, the Mute, and the “troupe.” Usually there is one per town or village, but in Bulgaria you can find several in any area, and in Yambol it resembles something like the social organization of New Orleans Mardi Gras Indian tribes, in which very macho guys get together during the year to sew costumes and practice their precision steps. 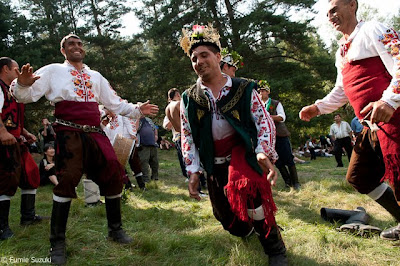 And in Yambol, a good proportion of the guys are Gypsy, albeit Gypsies who no longer speak Romani. But the macho thing is there in good dose, especially when expressed as a willingness to perform the most erotic possible belly dances “cocek” for admiring women. there is a part during one of the Koleda dance routines in which two guys face off inside the circle of marching Koledars and do a pantomime fight dance based on belly dance moves.Every now and then the guys shout out short verses to which the amswer is "YAMBOL!" so I can pretty closely guess what the questions are - Who is the coolest? YAMBOL! Who is the slickest? YAMBOL! And these guys wear some pretty serious bayonets in their boots and also sport spurs for the clinking effect as the dance. You don't want to mess with these guys. 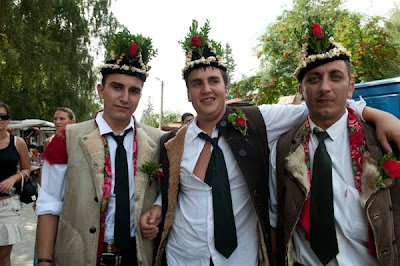 The groups portrayed here were Yambol groups who performed last summer in Koprivshitisa, during the festival. We hung out with them for several hours, since they were the ones with the best gaida bagpipe players and they were in constant party mode before their scheduled stage performances, guzzling beer and dancing in the fields and generally having a good time. I found a few videos on Youtube, including this one of some the dancers pictured here - in fact, if you know my straw hat you can see me for a second in the audience. The good stuff starts around 2:30.To get an idea of what the Yambol Koleda looks like while marching around the streets of a provincial Bulgarian town, try this out. Sure beats singing for figgy pudding,anyday.Ah, to be in Yambol at Christmas time!
Posted by dumneazu at 9:21 AM

I only know one family who lit an actual candle on a christmas tree and I am Hungarian. That family did this about 10 years ago.

And whilst the carp is the traditional dish, families are more and more adventurous when it comes to Christmas dining...

Sorry, but I felt your information was a little out-dated.

Oh, Bob, I'm Hungarian... but carp? The puliszkagombóc eating carp? No Transylvanian Hungarian would ever eat that at Christmas. NononoNONO! We eat PORK! We've just killed the pig to have pork for Christmas. Our presents here are delivered by The Angel. Jesus is a one day old baby, can't deliver presents. Not in Transylvania at least.

@MuciFoci
Believe me, this is definitely not outdated. I don't know anyone who doesn't light candles, eat carp, shut themselves in, etc. Of course, you probably know people very different from my circle of friends, but still - I believe the middle class hasn't changed much. At least the middle class I know of and see every day...

So I am not arguing candles in general, I am all up for those but I can categorically say that I do not know of anyone who still puts a lit candle on a Christmas tree!

If I have misunderstood the context I apologise.

I do not eat carp, nor my husband. Nor my brother in law or sister in law. And quite few of my friends. That's why i said it is a tradition that isn't adhered to as strictly as it was about 10-15 years ago.

Hey... as an American music-enthusiast spending Christmas in Yambol I was kind of excited to stumble across your post. I'll try to take some video of the koledari and send you the link.