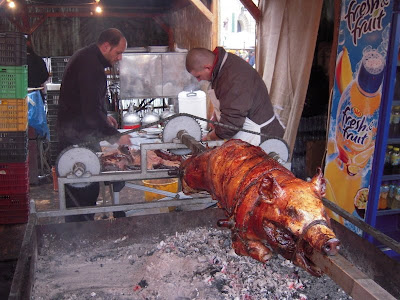 I’ve been home in Budapest for a week, busy rewriting and editing my mysterious Transylvanian masterpiece… and suffering from a knockout common cold, so I haven’t really gone out at all since I arrived. Budapest is blanketed in a thick layer of snow and the going is slow. But this weekend is the annual Mangalica Pig Festival in the city park near my house, so with a dose of freshly imported Nyquil and an extra sweater, I dragged myself into the wintery park to gawk at pork. Hungarians love pork. 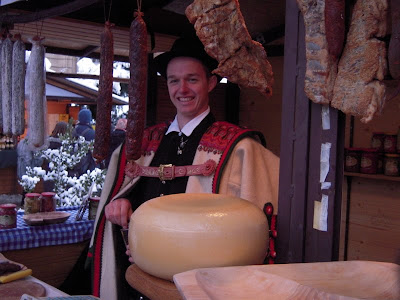 No, that’s an understatement. Hungarians adore pork. Hungarians worship pork. Pork is what Hungarian heaven is made out of. Hungarians are top quality smoked bacon transformed into Human flesh. Having just spent two months in the health conscious USA where I could feast on beef and fish and lamb, I haven’t been all that happy about my meat choices on the old homestead. Pork, pork, chicken, and pork. I have not quite been able to make the transition yet. I still want greens in the winter, salads, and other illogical choices in a land where people still eat according to the seasons. And it is now bacon season. 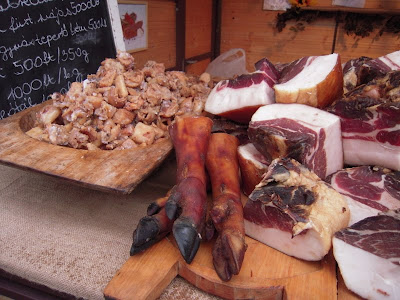 Now, as a non-observant Jew, that shouldn’t bother me. I eat pork. I eat cheeseburgers. I recently ate raw sea cucumber and sea squirts, so something that even has a spinal cord should not faze me no matter how treyf it is. I did, in fact, pick up an ample supply of high quality oinkerie while I was laid over in Rome, but I needed some kind of special jolt to get me back into the Hungarian Way of Meat, and the Mangalica festival was just the thing. Mangalica is a particular local breed of wooly haired pig known for its luxuriant fat, a factor that goes a long way in Hungary, where lard, bacon, and salami are staples consumed daily, and in many cases, hourly. 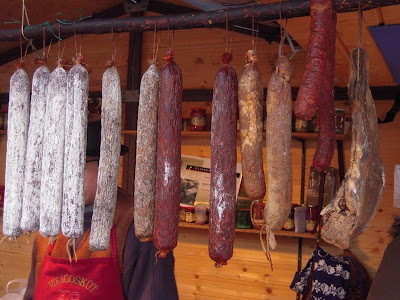 Just when Hungary entered the EU, it took the EU patent on a number of locally produced products that henceforth could only be labeled as Hungarian produced products, such as Tokaj wine (screwing the producers of Italy’s Friuli wine region, who produced their own form of Tokaj but are no longer allowed to use the name) and generally known in Hungary as “Hungaricum.” Mangalica as a pig breed was originally Hungarian, but fell victim to the use of industrial strength porkers during the communist years and almost went extinct, until the breed was revived during the 1990s by bio farmers in Hungary and Austria – thus it gets the Hungaricum label but not the EU protection. No matter, it’s just a pig with curly hair and grainy fat. 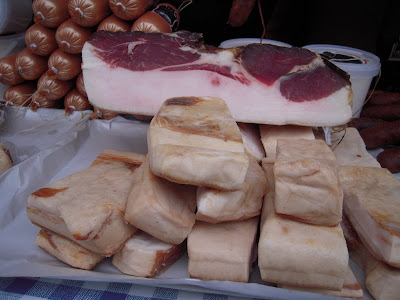 Good grainy fat. Fumie and I had a mangalica meat cook-off last year with middling results: it’s a bacon and lard pig, not really a meat porker. But that doesn’t stop the Hungarian producers from promoting the hell out of it, and well they should – good mangalica salami, bacon, or crackling is a thing of beauty. I was pleased to see the homies from my Mom’s town of Veszprem representin’... 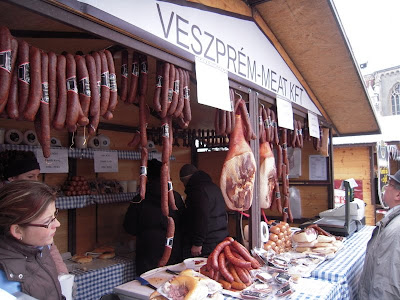 There is nothing a Hungarian needs in the middle of winter more than a good outdoor festival to get the blues out of the air. The normally dour Magyar soul opens up at festivals, especially around things that Hungarians are familiar with - bacon, fiddle music, and palinka are a good starting point. People were laughing and singing and dancing… I came up on some of my oldest friends playing Transylvanian folk music in the courtyard of the Agricultural Museum. 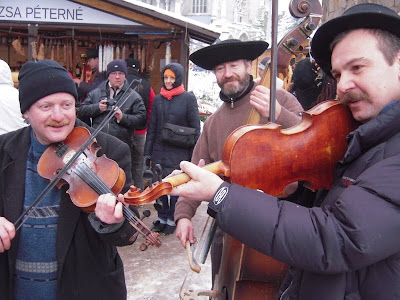 Geza (my old bassist from DNK,) Pintyu, and Pubi on lead fiddle had been playing for three days in the snow, pumped with wine, palinka, and plenty of freshly fried mangalica pig skin and bacon which were constantly being offered by the coterie of traditionalist butchers who had hired them to play for their central quarter of the festival. Since they had to play outdoors in the cold and snow, they brought their worst instruments to play outside. But no matter... Pubi plays as well after drinking for three days as he does when he's sober. As we musicians say... he has more chops than a butcher shop. 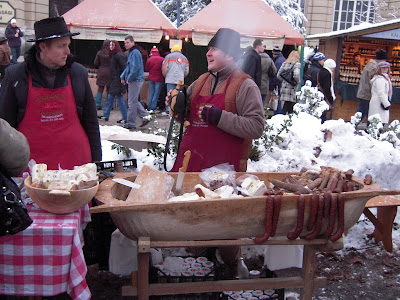 It was perfect – these guys are some of the most accomplished Hungarian folk musicians, they have all played on the world’s best stages, for the State Folk Dance ensembles and for world music festivals, but here they were just having fun in funny hats with brandy and fried pork and and bacon, the way a Magyar is supposed to have fun in the snow. This is music the way I like it: honest, greasy, and freezing its ass off.
Posted by dumneazu at 3:00 PM

Where did Geza get that hat?!!

wonderful insight to other folks ways, their food and music looks and sounds so good. Thanks for sharing.

I've started a thread on eating in Budapest on chowhound. I'll be staying in Pest soon and would love anyones thoughts particularly on where to eat Mangalica