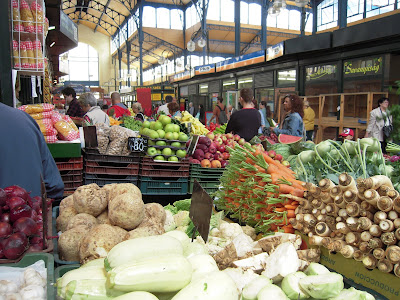 We do our shopping at open markets several times a week. It sure beats shopping at Costco - my meat is never prewrapped in plastic, my kraut is scooped out of a barrel, and there are bugs crawling on my radishes. I know my butchers and they know me, I have my favorite farmers' stands, the mushroom lady sees me and knows I'm the Weird Guy Who Puts Oyster Mushrooms in Soup. The best market people are performers on their own stage, ten hours a day, six days a week, masters of marketing in their unique way. The tomatos below were on thirty percent off sale for five minutes in each hour... the sign says "Please Don't Squeeze Them. They are not Bagpipes." 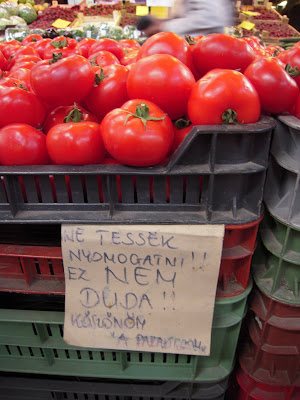 Usually we hit Bosnyák ter Market in our nabe in Zugló, which is one of the cheapest markets in town and still one of the most traditional, which is to say beat up, dusty, and low priced. Some days, however, we head to the tonier Lehel tér market, where good Csopak wine comes in two liter plastic bottles for FT 880 (four US $.) To get to the Lehel tér market, we use a secret route that begins behind a hidden "village" located next to the MAV railway tracks behind Mexikói ut. 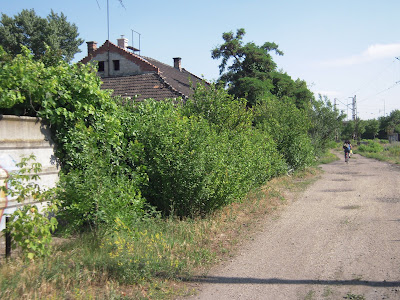 There seems to be a lost village of retired MAV workers back here, complete with houses that seem to have been plucked out of some dusty country village, along a dirt road complete with flower beds. There isn't any evidence of the expected hobo settlement, and although the crossing for traffic is almost always down, most pedestrians and bikers simply look both ways and walk across the rail crossing.If the station master starts yelling at you you know there may be a train coming. 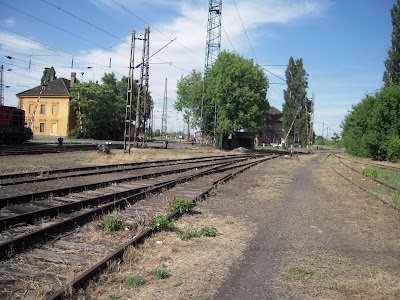 This leads to the Rákosrendező train station, where there is an old fashioned bar and snack stand for the railyard workers, before crossing over to northern Pest and a ten minute bike ride to Lehel tér. Although still in use for local trains, the main purpose of this station seems to be to provide shooting locations for bad avante garde films. 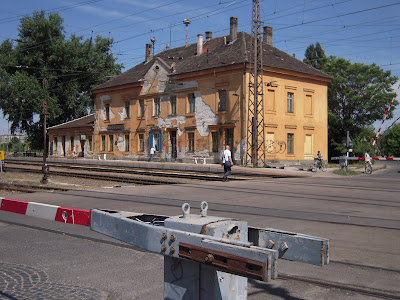 Lehel tér has one of the last remaining old fashioned self service cafeterias left in Budapest, a relict of the old communist era chowhouses that used to be found on every main square and which have now pretty well all replaced with McDonald's. You grab a tray and choose from an array of food sauced in parika and sour cream. 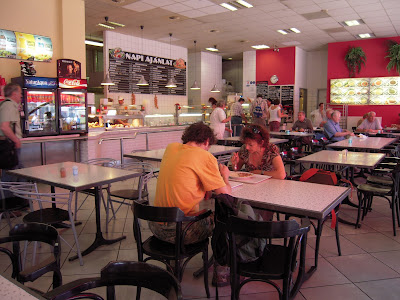 Old time budget meals that have almost disappeared from restaurant menus such as spaghetti covered in poppy seeds and sugar are always available here, but the smart choices are good old fashioned Hungarian stews: pörkölt. This is a classic circa 1982 worker's lunch. 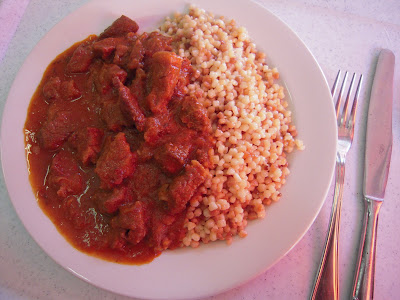 This is probably what most foreigners think of as Hungarian "goulash", but in fact it is what we call marha pörkölt - beef stew. Essenially, beef stewed in paprika sauce over the tiny peal pasta called tarhonya. Tarhonya is an old way of dealing with dried pasta: the term comes from Old Turkish - tarhana - and today you can find a similar pasta in any Istanbul supermarket, and tarhana soup is considered the national dish of the Volga Tatars. Hungarians pan fry the tarhonya first and then add the cooking water, which makes the tiny pasta come out in varying shades of yellow and brown with a nice nutty flavor . 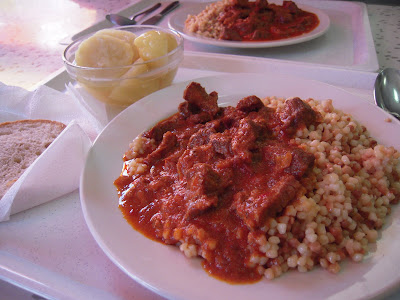 In Hungarian cooking each meat stew is considered to have its own side dish: beef stew gets tarhonya, while pork stew is served with the little egg and flour dumplings called galushka. I've actually been lectured by waiters when trying to get a beef stew served with galushka. It just don't work that way in Hungary. Sourkraut stuffed yellow peppers make this a complete summer meal. 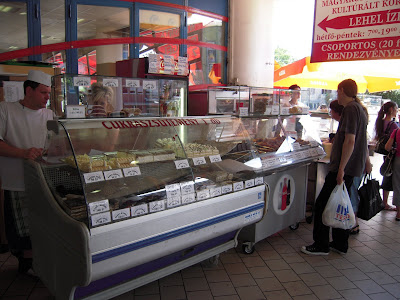 After a nice, light summer meal of a plate of stew and tarhonya - yes, this would be considered a light summer meal here - what better could you wish for than some nice cakes. And voila! - the pastry stand is located just outside the cafeteria, close enough that you can grab a dessert and bring it back inside to finish off your meal.
Posted by dumneazu at 5:15 AM

Spaghetti with sugar and poppy seeds? Sounds like something us French Canadians would eat!

I had heard somewhere that Bosnyák ter was going to be redeveloped into some sort of "new city centre".

I lived for a few months near the back of the market on Komocsy ut and I was always amazed at how early on market day the nenis and bacsis arrived. I suppose all the good stuff goes early. :)

Yes, Boznyak is supposed to become the new mall when the #4 metro is extended that far, but chances are that FIDESZ will likey cancel the metro construction when they come to power, so it may be decades before that ever happens.

I must take issue. My lunchtime is normally spent in a finance-y part of district VI and all of the mains you mentioned are normally available in an upscale bufé. I just wish they'd serve zúza pörkölt more often.