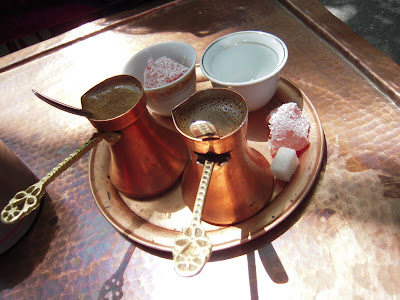 We got home last night from Bosnia. Given how much I travel, I should be jaded by now, but the astounding geography and physical beauty of Sarajevo City, and most of all, the openness and friendly outgoing quality of the Bosnian people we casually met absolutely floored me. If any of you are looking for a truly unique experience while traveling around Europe, do not miss out on Sarajevo. With Europe now becoming ever more homogenous - a mall here, a Starbucks knockoff there - Sarajevo manages to retain a singular idenity - not surprising, since not many European nations spent half of the 1990s fighting tooth and nail to simply survive in Europe the way the Bosnians did. It isn't a tourist town: it is an actual city full of heroes. 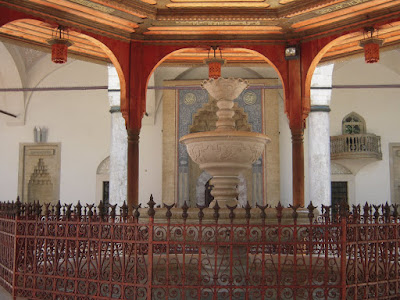 During the Yugoslav wars of the 1990s, the Bosnians wanted to maintain their multicultural traditons of religious and cultural tolerance only to be cheated by both Franjo Tudjman and Slobodan Milosevic in a secret 1991 agreement to split Bosnia between Serbia and Croatia. Nobody thought the Bosnians would survive, except the Bosnians themselves. The result is a place and peiople that really appreciate what survival actually means, and live their days as a gift in an almost supernaturally beautiful setting amidst memories of the most horrible urban warfare of modern times. 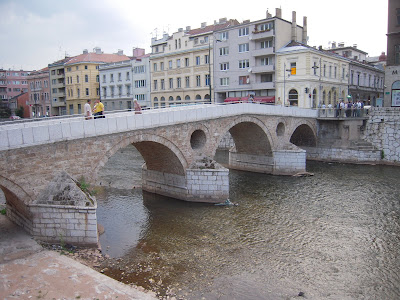 Sarajevo is also where WWI started: Gavrilo Princip shot Austrian ARchduke Ferdinand on the Latin Bridge in the summer of 1914. Within two months of that act nobody remembered what the war was even about anymore - it was a war for war's sake. Welcome to the 20th century, greetings from Sarajevo. Today, getting to Sarajevo from Budapest was easy: 50 EU round trip on the train from Keleti station. The one drawback is that the train takes twelve hours - bring bottled water, food and WC paper. Sarajevo isn't really convenient to anywhere... which is it's gaping weakness and its saving grace. The city is beautiful - almost fully rebuilt from the crippling damage of the longest urban siege in European history between 1992 and 1995. 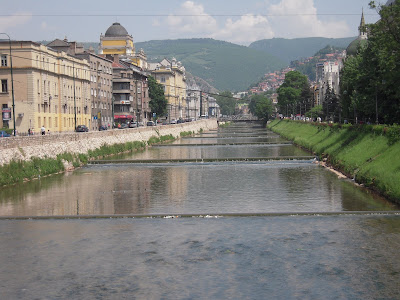 Tourists are present, but not overwhelming, and the Bosnian people take time to approach and enage foreigners in conversation. I had never visited Bosnia, partly because for many years a lack of accomodation made staying overnight very expensive. Happily, for a tourist, those days are gone, and today you can get great accomodation for below 20EU a person in the Bascarsija, the old Ottoman era district. 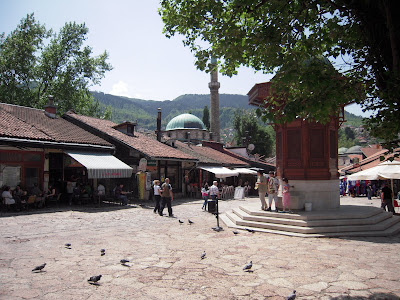 Eating is similarly cheap - expect less than 5 EU for a great meal. And since the market districts still serve locals more than tourists, prices on carpets and crafts were very close to what you would find in the back markets in Istanbul (which is where, in fact, a lot of the tchatchkes come from.) 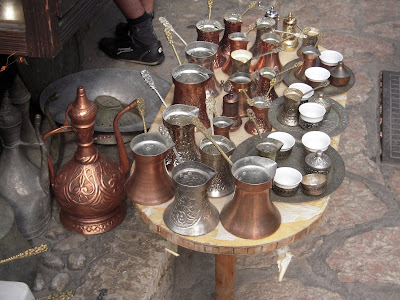 In addition, Sarjevo is a coffee culture. The entire city is dotted with cafes, and coffee costs between 50 Euro cents and one Euro. The old city has a definate Ottoman era feel to it: cevapcici houses on every corner, burek bakers, stew shops (I'll post separately about each of these specialties later) and in between... coffee shops. Most locals opt for the traditional "Bosnian coffee" which we know as Turkish style coffee, served in copper beakers with a glass of water and a block of loukoum, a jelly like sweet otherwise known as "Turkish Delight." It was hot during the days we were there, and cafes also offer fresh squeezed lemonade with the pulp floating in it, as well as a local "domaci suk" - a homemade soft drink made from lightly sweetened juniper berries. 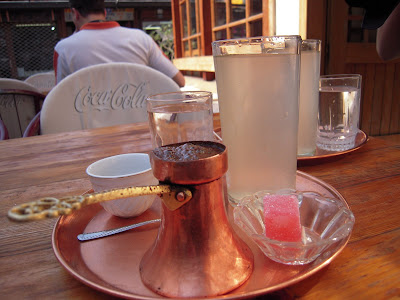 The old city tempo of life is pure badialdzija. Badialdzia is a Balkan Turkish term we used to use in Skopje to describe the master of doing absolutely nothing besides sitting around in tea houses all day: the producer of nothingness. Balkan Zen, in a sense. 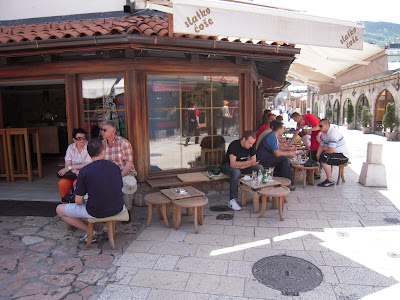 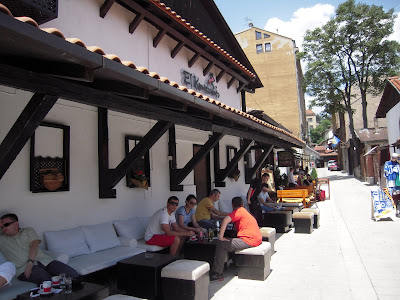 Modern Sarajevo is predominantly Muslim - the term "Bosniak" means a Muslim Bosnian as opposed to a Catholic Croat or Orthodox Serb - but it is a congenial and tolerant Ottoman style of Islam. Turkish influence is widespread, no surprise since so many Bosnians found refuge in Turkey during the war when Europe was reluctant to admit so many of the over half million refugees. Today a lot of those refugees have returned bring some of the best of modern Turkish culture with them. And - while you can always find a beer or a slivovitz if you want one - Bosnians don't drink a lot of alchohol. It is almost a relief from the stereotypical drunk and boisterous Balkan cultural syndrome that lives from loza to loza and falls down at night. No, Bosnians prefer to sip coffee... 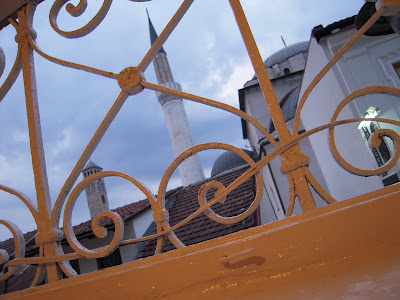 Of course, at the end of a day, a few loza and a glass or two of wine does bring out the old songs... we were lucky to have found Mirella's Cafe on our first night in, weary from the train trip in from Budapest. The next afternoon she was waiting for us with her husband and friends... and an accordion player. This is what we mean when we talk about Balkan music and Balkan soul...
Posted by dumneazu at 2:55 PM

We were in Sarajevo a couple of months ago, arriving after short stays in Skopje, Dubrovnik and Mostar, and I immediately fell in love with Sarajevo. If I could figure out how to support myself there for a couple of years, I'd be gone. A truly remarkable city, for all of the reasons you've written about.

First off, I want to make this clear: no, it's not Pemmican.

After some extra digging I managed to find more secrets that were almost lost to history. I'm more than happy to share them with you.

In The Lost Ways 2 you'll not only find out what this superfood is, you'll also discover all the survival skills necessary for any crisis, including a lot method of preserving meat for over a year without refrigeration and how to make the lost samurai super food. And much, much more.

==> Click here to see everything you'll find in The Lost Ways 2.