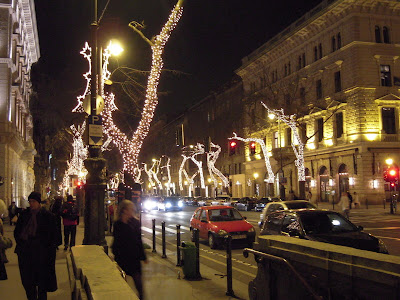 Happy New Years, Season's greetings, 2008 is done and gone... time to look forward to 2009. I spent this holiday season in Budapest, which is rare for me... Last year I was in New York. Dim Sum for Christmas. Dim Sum for New Year's Eve. Amazing Burgers at Five Guys in Hackensack for New Years' Day. As usual, I didn't go out on New Year's eve, but spend it at home with my parents and Fumie. My folks were back in New Jersery this year and Fumie is in Tokyo for the winter... so this year it was Budapest: 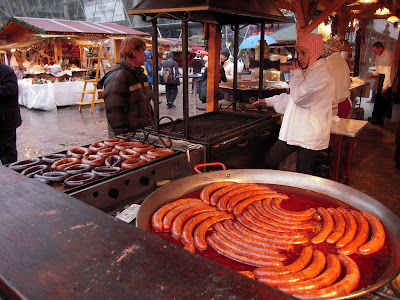 The Christmas markets were out in full strength, but no, I couldn't bring myself to eat at them, highly overpriced sausages and Transylvanian rolled kalacs, it just aint the same as Dim Sum in Chinatown. But as always, Hungary's strong point is treyf... pig meat. Pork-o-rama. If you like eating hog, and you can't be in North Carolina for Christmas, then Budapest is definately your second best bet. 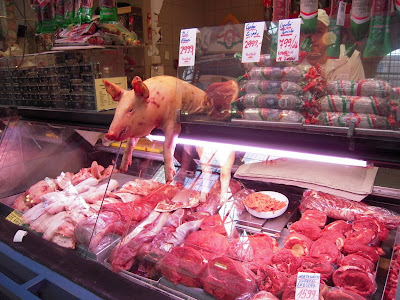 Of course, the global economic situation has people in Hungary worried about their budgets, and since Hungarians, due to their bizarre tax laws, do not save money up in bank accounts (it gets taxed and lost that way) they spend an incredible amount at Christmas on gifts (gigantic-wall-mount television screens were a big mover this year) and scrimp on the pork. But only a little. This year was the first time I noticed the abundance of pig noses that came out at Christmas markets. 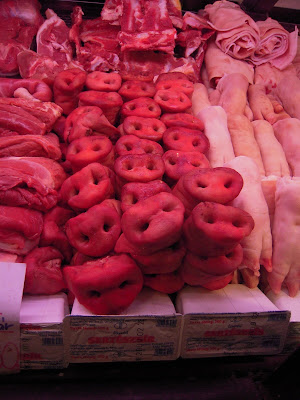 Now, for all I know, pig nose is a healthy alternative to say, chicken nose or cow nose. But it did seem a bit depression-era surprising "Back in them days we fed the kids on pig nose. Seems like Christmas without hog snout warn't Cristmas at all..." I have never seen a recipe for Christmas Pig Nose Soup, or a pig nose casserole. But at FT 600 a kilo (about three bucks for two punds), a lot of people were going to have a surprise out on the table on Dec. 26th... don't forget the kleenex! 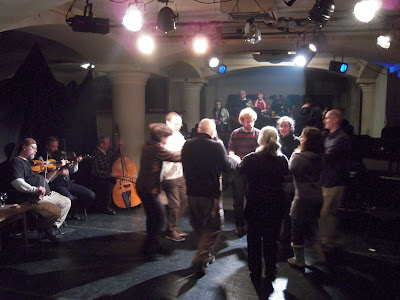 I did, however, forego the pork. Di Nayes played for the first ever Klezmer dance workshop at the Siraly for Chanukah, which brought out a lot more people than I expected for December 23rd. Sue Foy taught the dances while we played - without Feri, our cimbalom player, who is in a lot of plaster casts since having a moped accident in November. He should be back in action in a few weeks, though. Something to look forward to. Another thing to look forward to is January 20th (a mere four days after Battlestar Galactica returns for its final season!) when we can finally say goodbye to the worst governement the United States has ever had the misfortune to experience. I, for one, welcome our new Obamacrat Overlords! 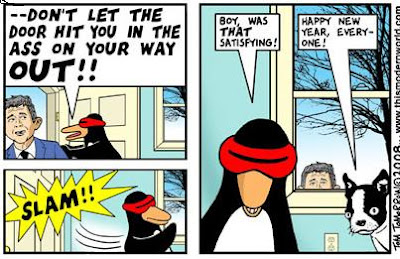 We promise to be better during the new years and keep up with our posting. We still have a lot of interesting stuff from our trip to Moldova, particularly from Kishinev... home of the world's best pickles... coming soon.
Posted by dumneazu at 4:07 PM

Happy Dim Sum to you too!

Great to talk to you on Saturday evening. Next day I came across an NYT article that describes my view on the issue better than I could myself. It is here: http://www.nytimes.com/2009/01/05/washington/05diplo.html

I'm absolutely obsessed with your blogs. I am visiting Budapest this march (my second time, but first was only for one day and night) for 10 days and am thrilled to have your blog to help guide me a bit. Everything you eat and photograph is just making me jump for joy inside. I'll be taking time to read through your entries and help make my trip even better!

Re pig snouts: I had Chinese New Year dinner in Taiwan in 1983. I was invited by an English student who was a professional, but the host was the elder brother who stayed in the village and financed his younger brothers' educations.

Anyway, the menu included tendon and "something a female pig has that a male pig does not have."

I could take it or leave it, but this was served at the high point of the year by a member of a prosperous, successful family.

I have several overlapping theories.

1. This is ritual food reminding people of their roots, like lutefisk for Norwegians or canned seaweed for Japanese Americans. "Liking it" is not part of the equation.

2. Chinese people sometimes eat things out of sheer curiosity, love of adventure, and bravado. I heard someone say, admiringly, "I don't dare eat that" about some dish someone else had eaten.

3. Sometimes Chinese think of being able to eat something as an accomplishment or a skill. I've also heard "I don't know how to eat that". (Of course, #2 and #3 could be politnesses.)

4. Many foods are thought to have medical virtues which are often particular to certain seasons. I know that this is true (KC Chang, "Food in Chinese Culture" or something like that, recommended!, plus multiple personal communications and other sources. In general, China has no food taboos, but has lots of incentive to eat weird thing, including minerals for medical purposes.)

5. Sometimes Chinese eat things for variety that they don't eat at all often.

Anyway, the pig snouts are cool. In some kind of way, they're a special treat. (And remember, pork is a holy sacrificial food among, e.g. Chinese, as I've seen at such weighty ceremonials such as funerals. The bigger the pig, the more honor).

Anonymous said...
This comment has been removed by a blog administrator.
8:59 AM