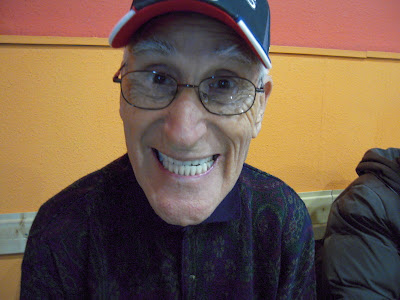 Hungary is notable as a destination for dental tourism. Apparently, much of the civilized world is under the impression that having a set of usable teeth should be way out of the price range of anybody who might ever want to chomp down on a chicken leg or eat an ear of corn on the cob. Dental prices in the United State are insane, and no, they are not covered by your health insurance if you are lucky enough to have any. My father needed a set of dentures and the American dentists he went to were quoting him prices of around USD $16,000. Holy frigging molars, that's enough to buy a new car... and so for about one eighth of that price, my Dad had his teeth fixed and new dentures made in Hungary. 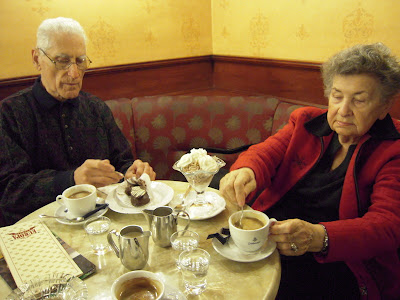 Part of the visit consisted of cooking soft things for my Dad to eat while he waited for his teeth to get made. The other part of the visit was watching my parents roam the city and eat everything in sight. My Mother is Magyar - born and raised - and so this was a chance to rid her homeland of its chestnut purees. Chocolate mousse "cat's toungue" cakes at the Europa cafe? Gone in a second. Their favorite discovery was the tiny Kadár Étkezde for lunch - so much so that I will post about that separately in a day or so. 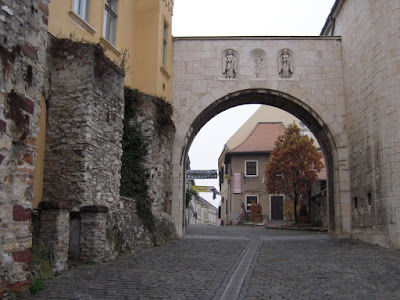 We spent the weekend in Veszprém - it was nice to get the parents out of Budapest - especially since my mother was born and raised here and left during the second world war. Visited relatives, cemeteries, and of course, ate far better than I ever do in Budapest, especially at the Óvaros Restaurant, located at the entrance street leading to the Veszprém castle. Below: pork ribs in spicy gravy with paprika mashed potato. 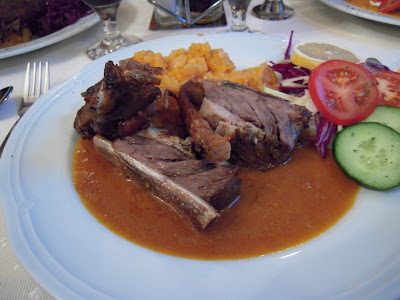 All around favorite: goose leg with red cabbage. Compared with eateries in Budapest, the food in the countryside is better: maybe the cooks are more professional, or they can't just quit and go to another establishment in a small town, but the dishes we had were far better, and less pretentious, than what I expect in the capital city. And cheaper, by about 50%. 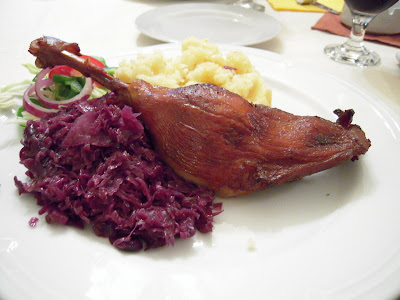 My Dad likes castles, which is understandable since there are precious few medeival monuments in New Jersey. Unfortunately, I do miss the exquisite White Castles that we have in Jersey, but that is a different story. And my Mom got to visit her old home town and point out her old school and the street where she learned to be a seamstress. Visited the relatives, living and dead. 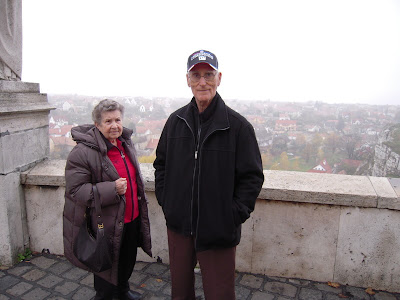 My good buddy Bruce "Bubba" Lewis did me a great favor in driving my folks and I out to Veszprem... I was lucky to grab him on one of the few weekends when he isn't playing any gigs in Budapest. My Dad was impressed when he found out that Bruce's grandfather was the former Governor of Kentucky, "Happy" Chandler, who went on to become the second USA commisioner of Baseball - the man that forced the major leagues to integrate. My Dad was a big Brooklyn Dodgers fan, and Brooklyn was the first team to include a Black player - Jackie Robinson. At the time, the other baseball team owners voted 15-1 against integration. Another case of New York leading the way in hand with Kentucky. And now we have an African American president elect. My, my, how times have changed. So Bruce and the Pops hit it off just fine. And now my father has Bruce's CD playing non-stop on his ipod. Extremely strange. 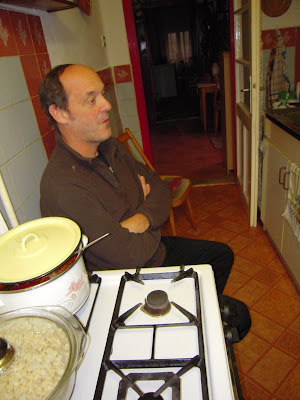 Bruce and I go wayyyyy back. We met at Boston University back in the pleistocene era, before the ice sheets separated us. With the end of the Ice Age, Bruce came to Hungary on a gig, and the Hungary Effect took hold, leaving him married, with two kids, a house, and no access to life-giving White Castle hamburgers. But we survive. With much less hair, I'll admit, but we survive. 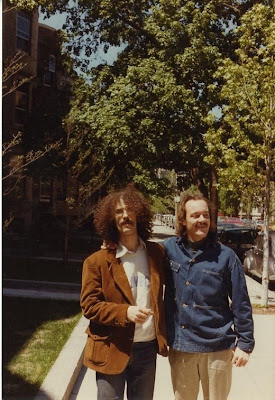 Ah, I'm glad he made full use of his hair in 1977 before it was too late! Informative about the baseball integration thing - shit, it's hard to imagine now why it would have been such a big deal.

Damn that food looks tasty. Nonesuch in San Francisco since the Sausage Factory closed a million years ago.