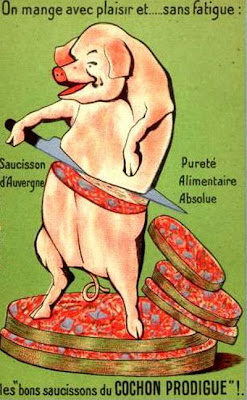 Yes, Yom Kippur has come and gone, and all around the world Jews are cleansed of their bonds and have atoned for their, well, something like "sins." We don't really have a concept of "sin" in the way that, say, Sarah Palin or Bart Simpson might consider "sin", but heck, when we get nasty it is a relief to know that soon after summer we get the chance to atone for breaking all the tribal laws that make us Jews to begin with. As part of my atonement, I'd like to share with you some of the sins that I enjoyed during the last year. Bring on the treyf! 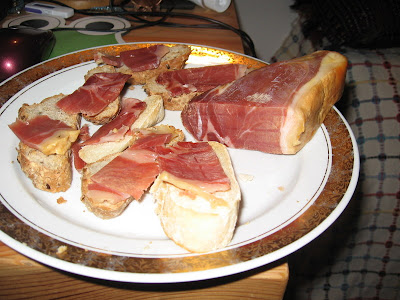 Pure Spanish jamon, a gift from our globe trotting friend Lisa. Fresh, salty, thick, and not very kosher. If this isn't a sin then I don't have a clue as to what a sin consists of. Adultery, coveting, sloth, greed... those are child's play compared to this. Many, if not most of my "transgressions" consist of eating things that do not conform to the Jewish dietary laws of kashrus. No, I am not a kosher Jew, not by any broad interpretation of the definition. Perhaps I am not alone in this, as evidenced by a particular rabbi's son with whom I spent time with in Weimar this summer. 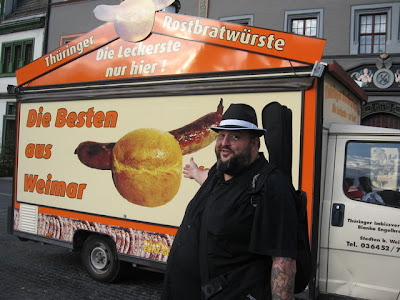 Now, don't get me wrong. I spent approximately fifteen years of my life in righteous pork denial, to the level that I wouldn't allow pork to be present in my house and would often use the term "pork breath" as an insult. Not entirely kosher, mind you, but definately anti-pork. Maybe an occaisonal eel. An awful lot of clams, I'll admit, and crabs?... don't even start with crabs. I ate a bit of catfish, sturgeon on occaision, and Gawdalmighty cheeseburgers by the dozen, but no, never pork. A lot of stewed curried goat. But no pork, whatsoever. This state of mind mysteriously disappeared when I moved to Hungary. 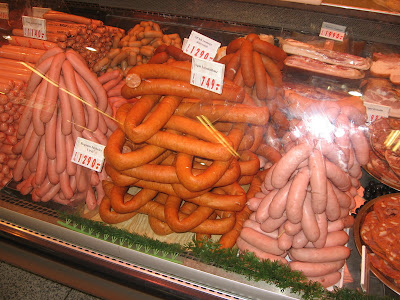 There really wasn't any doubt that being kosher wasn't going to be an issue when I moved to Hungary. While we have an active kosher Orthodox community, and a lot of my buddies keep the pig at a distance, my years in the land of the Magyars have - shamefully, I admit - been one long swine-fest, a veritable roll in the sty of culinary life, and damn... whatever bonds I was bonded by sure taste good when I broke them.

Now, I don't eat pork out of any anti-religious attitude. I eat pork for protein, and because I like eating animals, particularly smart ones that rescue hillbillies from burning shacks in West Virginia on occasion. I also eat pork out of convenience. Train travel, for example. 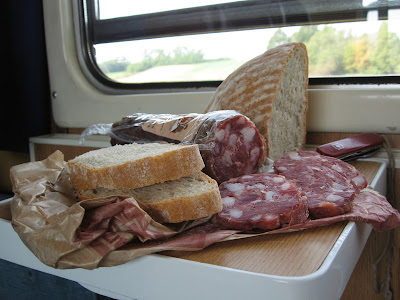 East Europe doesn't really do beef - it takes too much land to raise, and isn't cheap. Or tender. Or available much of the time. So, as in Poland, you eat the meat that you can raise in your backyard and sell to truckers along the highway in front of your house. 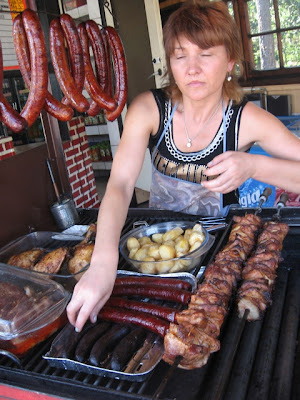 Actually, this year I can happily atone for the sins of my Father(s)... who took me out to an International House of Pancakes in Teaneck, New Jersey and personally oversaw my consumption of the all American I-Hop breakfast... thanks, Pop! 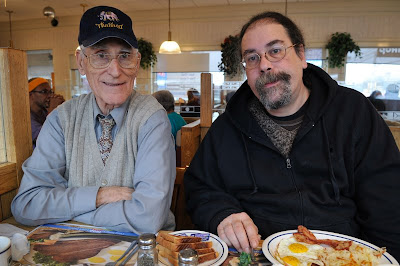 I can atone for the sins of eating other non-kosher forms of delicious food. Usually, traveling in Muslim territory means no pork. Fine. But that doesn't mean I can't transgress over a plate of succulent stuffed mussels as served in Istanbul... no scales at all... bottom fish as the working class of Philadelphia would call them.... 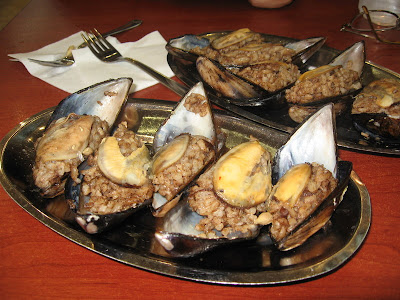 All in all... a wonderful year to atone for!
Posted by dumneazu at 1:50 PM

you are a cruel man.

Mazel tov. What happens on Rosh Hashana, do you go to the big Tony Curtis synagogue? I went inside it on a guided visit, we had a lovely young man as a guide who sat us down and said: "Now, how many of you are not Jewish?" About half a dozen of us put our hands up. "OK. Nobody's perfect".

For me, as another back-sliding Hebrew, pork is the final frontier!
I have on occasion eaten lobster, squid and even bacon, but pork? Absolutely not! (With the single exception of a small pork pie eaten in extremis in the north of England 25 years ago - I still shudder at the thought!) They're a lot deeper that we think, these ancient tribal prejudices.) I can't bring myself to smoke on a Friday night either! Go figure.

As my friend Halina (Goldberg) likes to say, if God didn't want us to eat treyf, He wouldn't have made it so delicious.