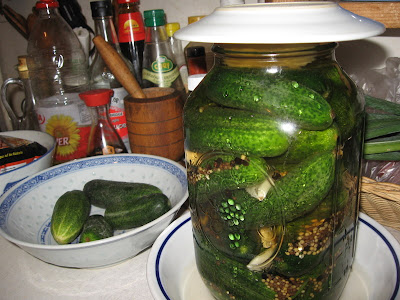 In Hungary, the midsummer doldrums when there is absolutely no news to report is called uborka szezon, literally "cucumber season" because there is nothing at all happening and the newspapers actually run stories about how "the cucumbers are ripening." Although, this being Hungary, the stories tend to be about angry farmers dumping cucumbers in front of the Parliament because they all ripen at the same time and the prices fall and the farmers don't like that, except that Parliament is not in session until September so the farmers have already decided to complain about the apple season instead and dump apples next month, because at least the ministers will be back in their seats then and they can get some desultory TV coverage. Hungary is a simple place with simple needs for simple people. Among my simple needs are pickles. Not the usual dill pickles which you get in Hungary. I specifically need New York Jewish style garlic half-sour pickles, and rather than complain about the lack of decent picklage in Budapest I long ago began experimenting with making my own New York pickles. 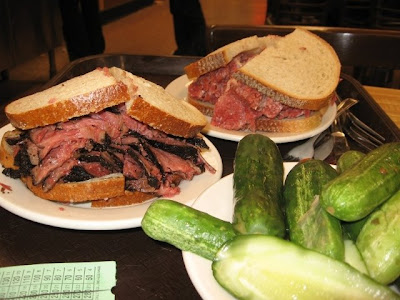 The model, yea, the holy grail of the New York half-sour are the pickles at Katz's Delicatessen on Houston Street in Manhatten. Readers of this blog already know my attachment to Katz's, the only place in the world where I would not think of complaining about paying $15 for a pastrami sandwich. The sandwich is really only a vehicle for the mustard and pickle. And the New York half-sour garlic pickle is the perfect food for the summer, occupying that vaguely defined space between a raw veg and a salad. At Katz's the tradition is that you should tip the counterman a dollar - he'll cut your meat more generously, but more important, he'll dump a half kilo of mixed pickles on a plate for you. It pays to tip your man at Katz's. 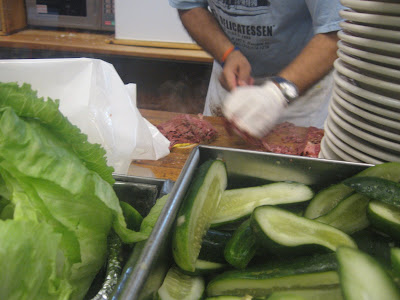 Part of the allure of Katz's is the pickles - you can get full sour or half sour, which are the bright green fresh looking pickles seen above next to an example of the world's best pastrami sandwich. Neccesity is the Mother of invention, they say, so I have learned to make my own. Luckily, during cucumber season, you can easily find the ingredients at any Hungarian vegetable stand. 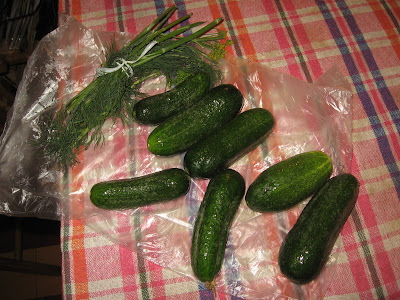 Kirby cukes and dill. I don't always like to use dill, but this time I gave it a shot. The results were fine, but my kitchen now smells like Finland, a land where dill and salt are the only flavors I can remember. Wash the cukes well and prepare a brine of coarse salt (it is important not to use fine iodized table salt - which results in a slimey, soft pickle) water and spices. How much salt is tricky to explain - I just taste the brine until it aproximates the saltiness of regular pickle juice that you get from store bought pickles, otherwise I tend to over salt the brine. I add whole black pepper, mustard seed, coriander seed, and a hot chile pepper and then pack the cucumbers in a large jar with about a dozen cloves of crushed garlic. 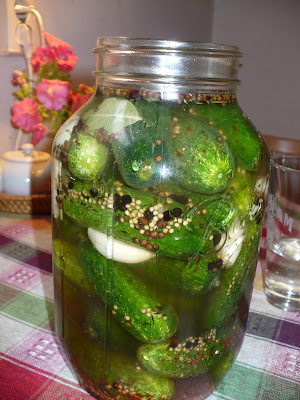 The sectret to Hungarian kovaszos uborka is to stick a slice of crusty bread on top of the brine to introduce yeast into the mix. I usually don't bother, but it speeds up the process and the New York style half sour cure takes only two days this way. You can use dill or not - I get annoyed at the smell of dill lingering in the kitchen after a few days, so I usually leave it out. It's the garlic aroma that I am really after anyway. 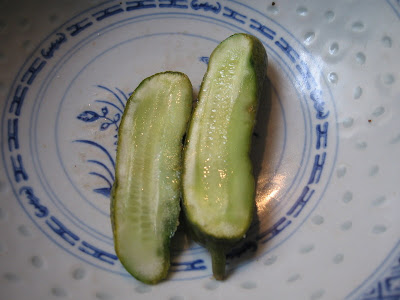 The finished product. Not quite as crispy as a Katz's pickle (which I believe all come from Guss' Pickles on Essex Sreet anyway) but close enough. If I could, I would travel to my home town for the New York Pickle Day festival, at the New York Food Museum on Sunday, September 14, 2008. But if you need tips, the Museum had a page of pickle making tips.
Posted by dumneazu at 12:57 PM

I tried pickling my own ogorki in Poland once, they turned electric blue. Someone said the cucumbers had been treated with chemicals. Someone else said it was just the wrong kind of cucumbers.

Thanks!! I too miss the pickles at Katz but I miss the full sours more than the half sours. I'm trying to make them, but they're hard to get crispy. (I hear added grape leaves, horsradish leaves, or oak leaves can help with the crispyness)

Two New York transplants are about to take your advice a mile high in Denver. Wish us luck; I doubt altitude affects pickling. Any theories/experiences?