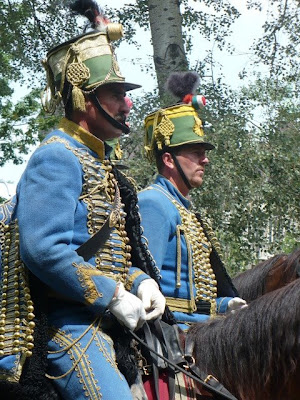 Hungarians are an equestrian folk at heart. Sure, the preferred Magyar mode of transport these days is either a Opel or a Mercedes, but for most of the last two thousand years Magyars were defined by their love of horses, in the way that the French can be defined by their love of stinky cheeses or the Italians by their love of strange RAI-TV game shows in which a bald fifty year old guy is surrounded by adoring young babes in bikinis. Hungarians came thundering across the steppes from Asia on horses, and they basically kept the tradition going until the rise of the electric trolley bus in the 1950s. This last weekend saw the cement vastness of Budapest's Hero's Square returfed in dirt and horse poop for the first running of the "National Gallop" - a huge outdoor horse race and all around national horse-a-thon. 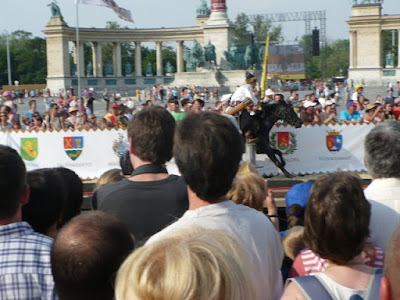 As for the races, the square was so crowded you couldn't really get near the stands or the track, which was all for the good, since you could watch the event on giant TV screens set up on the perimeter. Watching several riders go flying and at least one panicked horse break through the barrier and into the crowd, I felt fine keeping my distance. The best show was around the back - by the ice skating rink where the riders got warmed up and prepped for their shows. Unless you go on a goulash tour of Debrecen, a visitor - or even a resident - in Hungary is highly unlikely to ever see anybody dressed in the tradtional costume of a csikós, or Hungarian cowboy. When the Communists collectivised the Hortobágy and Bugac plains in the 1950s their way of life - herding livestock for smaller private holders - went the way of the dodo, and their costumes went with it. 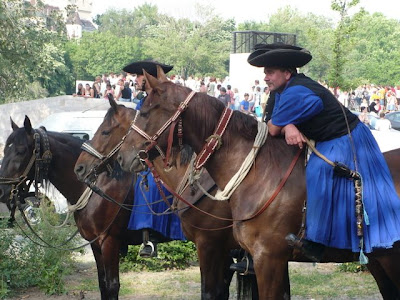 Most of the participants at the race were from various "Tradition" clubs, folks who get together on their own coin to keep things like Huszár troops alive. And yes, they are frighteningly good horsemen, although why anyone needs to ride a horse while standing up in the saddle is completely beyond me. Hungary is full of horse clubs. One of the cheapest investments a private citizen could make in the early 1990s when private land ownership returned to Hungary was to take a marginal piece of land and set up a horse farm and riding stable. The result is affordable and available horsey fun all over the country. And part of Hungarian horseman tradition is the food that sustanined our boys in blue: gulyás leves, the soup of the gulyások, which is the name of the cowherders of the plains. 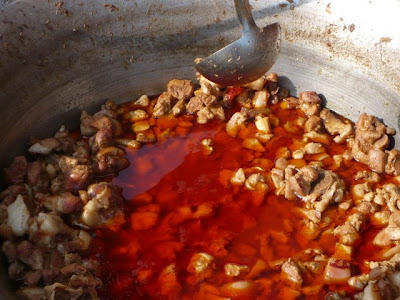 I wrote earlier of the despair that overwhelms me when a visitor to Budapest asks to find a good honest bowl of gulyás soup. Wait until the weekend, and then try and go to some big outdoor event and hope that there is folksy catering. Hungarians haven't really discovered that the world is full of tasty foreign festival snacks. No falafels, no Venezuelan arepas, no taco trucks, no vegetarian stand. At all Hungarian festivals, the chow is Magyar, and luckily, it is usually very good Magyar. The gulyás at these events is outstanding and, of course, usually sells out in the early afternoon. 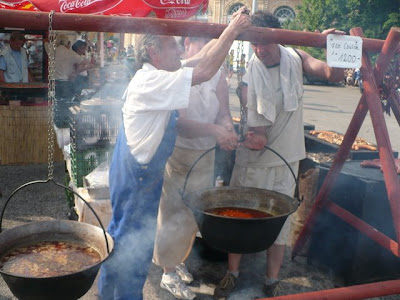 A popular pastime in hungary is historical re-creation societies: people like to dress up as Ancient Hungarians and spend a weekend Hunning about in yurts on the dusty plains. In the USA we have folks who dress up in historically accurate Revolutionary war gear and spend weekends marching around in formation while eating moldy hardtack. In Hungary we have weekend barbarians. 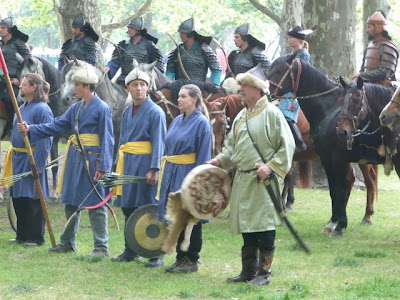 Horseback archery is a big, legitimate, and rather difficult sport in Hungary. Historical leatherwork and sewing ancient Magyar outfits is a booming business. I was amused, therefore, by the big kettle of guylás that seemed to be at the center of the yurt village. These folks don't cut corners on accuracy, believe me. But paprika didn't really come to Europe until 500 years after the Hungarians had hung up their furry hats. Gulyás soup with paprika is actually a dish that developed in the late 18th century, after the Turks introduced it. But no matter: one doesn't get between a Hungarian and his gulyás. Ever. Especially if he is carrying a battle axe. 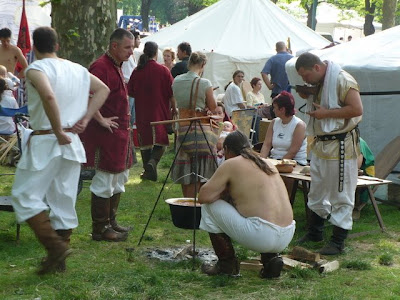 I'll delve into the revival of Ancient Hungarianism in a later post, but the atmosphere at the National Gallop was surprisingly positive and refreshing. Suddenly it hit me: it has been years since there has been any public event involving Hungarian history and traditions that has not been co-opted by the loonier fringes (including the center right) of Hungary's polarized right wing political groups. This was a day that normal Hungarians could take their families out and be proud of their Huszárs and cowboys and old Magyar forebears without the droning, raging aggressive whine of nationalist loudpeakers. Calling the event the "National" Race was like waving a red cape at the nationalist bulls. The right wing groups denounced participation in the race since it was serving "Mammon" - in this case in the private sponosorship of banks and the directorship of Wonder Boy Peter "Hey! I can get Rich off of Damn Near Anything I Do" Geszti. If this is the case, go Mammon! 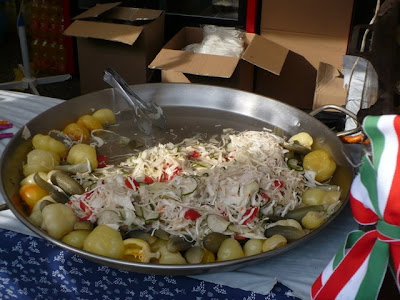 Mammonites get hungry too. The proper side dish to gulyás is a big plate of pickles - you can choose between sour cukes, peppers, and the ever popular csálamadé, a sweet-and-hot take on sour kraut that transforms a hunk of sausage into a hunk of sausage with csálamadé. 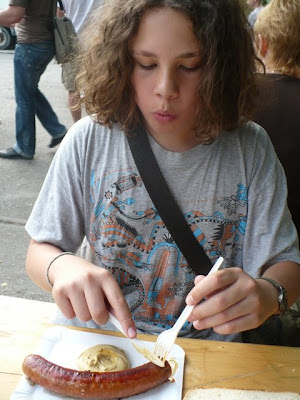 Áron digging into a microscopically small serving of kolbász. Usually I don't suggest the kolbász at outdoor festivals - it tends to be dry, burnt, and overpriced. Not here. 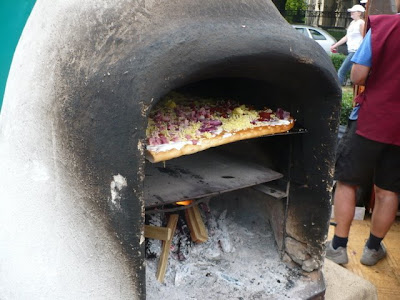 Everybody loves pizza, right? So what if Hungary has no tradition of pizza? Make one up! These mud ovens pop up everywhere there is a festival, offering "traditional" Hungarian "flat bread" with remarkably pizza-like toppings, served by enthusiastic folks dressed in folk costumes. But I have never seen, heard , or eaten this pizzoid object except at festivals since 1995. I grew up eating Hungarian food. All the men in my Hungarian family are either chefs or butchers. Years of studying Hungarian ethnography and visiting in villages have never revealed this "tradition" to me or any other folkorists, but heck, pizza is pizza, right? Bring it on! 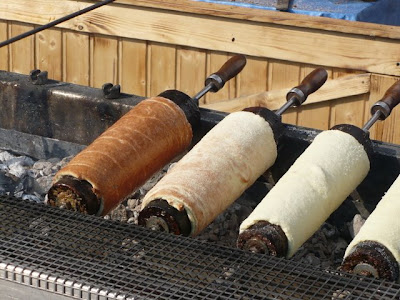 I have to admit, Erdélyi kürtos kalács, or transylvanian horned cake is gooood. Of course, paying Ft 1000 for one is not gooood. These were merely priced 300% more than they cost at the subway station in Kőbanya. Mammon indeed. Alas.
Posted by dumneazu at 1:23 PM