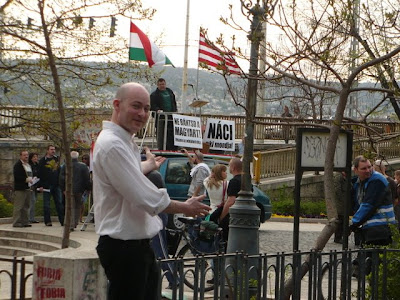 Geoff Berner is a Canadian singer and songwriter based in Vancouver, BC, who is known in certain parts of the world (Canada, Europe, not too much in the USA) for his sharp, witty songs accompanied by his trusty low-tech accordion. Geoff and I met a few years back when he asked me to drag his ass around Romania in search of the last generation of Jewish and Gypsy musicians who had first hand knowledge of the music that gets labeled "Klezmer" in the modern world. At first I was wary - I have had too many off experiences traveling the backwoods of Romania with eager greenass folk music tourists in tow, but finally agreed when Geoff offered to rent a car and haul me and Fumie around for two weeks. It turned out to be one of the best road trips I ever had in my life, madly cruising the pot-holed roads of Maramures along with Geoff's drummer Wayne Adams and his fiddler Diona Davies, collecting music, drinking way too much, and giving impromptu concerts in peasant yards and Gypsy bars. Last Friday, Geoff showed up in Budapest to play a supporting set for Norwegian rockers Kaizer's Orchestra. 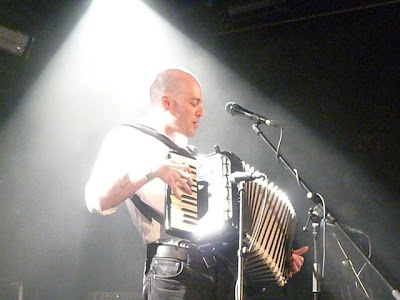 The set was impressive - Geoff's thing is to take Jewish and Klezmer folk themes and regurgitate them through the semitic processor of his Canadian-Hebe brain and see what comes out on the other end. He managed a song about Odessa gangster life, an English translation of Mikhl Gordin's "Di Mashkes" (The Whiskey... a recurring theme in Geoff's songwriting career as the Whiskey Rabbi) and the "Official Theme Song for the 2010 Vancouver / Whistler Olympic Games (The Dead Children Were Worth It!)" (a merry little march tune in referrence to a Britich Columbia medical program for investigating inexplained children's deaths that was defunded in order to make more money available for the Olympic developement in Whistler, BC.) If you took Steve Earle, Moshe Dayan, Clifton Chenier, a squirrel monkey and put them all in a molecular transporter in Winnepeg with a faulty circuit and flicked the "on" switch, you'd get Geoff Berner. 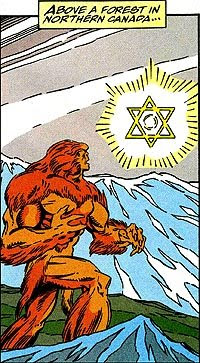 Geoff arrived early on Friday, and so we took the man out for some real Jewish Budapest experiences. What kind of Real Jewish Budapest experiences? Oh, just the normal ones. Star with lunch at Kadar's in Klauzal ter. Coffee at the Siraly. And of course, no visit to Budapest would be complete without a trip to a Nazi rally in the heart of Budapest's second largest Jewish neighborhood, Ujlipotvaros! 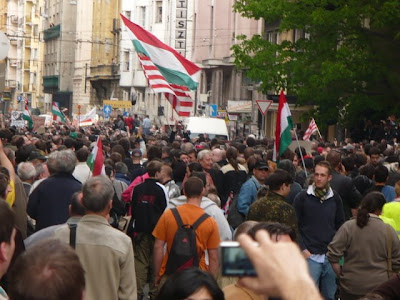 Yes, it is a sad but already prosaic fact, but Hungary has a very vocal radical right wing of skinheads, neo-nazis, and guys who like to dress up as either Huns or WWII Arrow Cross guards and burn Israeli flags, desecrate Jewish graveyards, and mass march through Gypsy and Jewish neighborhoods intimidating old people. Over the last few weeks Hungary's Socialist-liberal government coalition has been weakening, there have been speculation that "center-right" wing part FIDESZ may soon be back in the ruling majority, reinstating Viktor "Baltar" Orban as Prime Minister. This has led Orban to behave in an unusually restrained and quiet manner - usually he has his "citizen's circles" engage in disruptive mass demonstrations against the government, but when the government seems about to hand itself to Orban on a silver platter, it pays to be prudent. Nevertheless, a few weeks ago one of Orban's old Bibo Kollegium era FIDESZ classmates, the writer Zsolt Bayer, published an essay in the now rightist newspaper Magyar Hirlap outwardly accusing Jews of being disloyal to Hungary and claiming "they hate us more then we could ever hate them." This led to the usual Battle of the Angry Op-Ed pieces in the Hungarian press, but once the smell of blood was in the water, the bottom feeders got the scent and rose to the occaision. 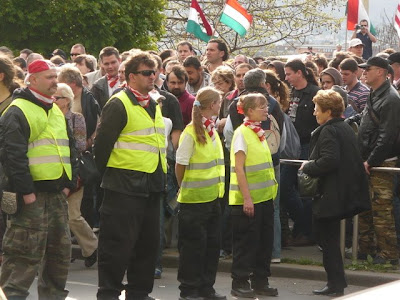 Now that Jews were once again on the editorial chopping block, the performance artist/rightist blogger who goes by the name of "Tomcat" entered the fray, claiming that a Jewish-owned ticket office in the traditionally Jewish residential district of Ujlipotvaros (the area of Pest just north of Jaszai Mari square by the Margit Bridge) had refused to sell tickets for one of Hungary's right-wing nationalist rock bands. (Won't mention the name here - publicity is a priveledge, not a right.) Naturally, this charge was complete and total bullshit, but it was enough to lead a couple of self-styled skinhead/nationalist activists claiming to be from the "Hungarian Arrow Party" to toss a molotov cocktail at the ticket office one night. 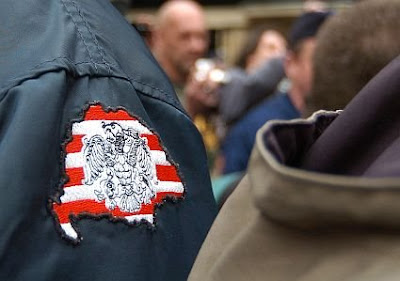 Hungarian public life offers a unique feature known as 'provocation' which works like this: some retard tosses a molotov cocktail at a Jewish shop, and claims that any reaction to this is a provovation, in this case against all Hungarians. Nazi skinheads then rally in a "flashmob" style to intimidate the neighborhood, which they call "Uj Zseland" (New Jewland.) About forty show up to be met by about 400 counter demonstrators. The shocker was that the counter demo attracted a wide spectrum of Hungarians, not only the usual crowd of liberals or Jews, but center party representatives including the FIDESZ mayor of the XIII district, Szabó György, who is in fact an Israeli double citizen and an observant Jew himself. (Uhhh.. I should mention that Szabó and his family have since gone into hiding and are under police protection....) The skinheads, nationalists and Neo-Nazis retreated, but only for a few days during which they could organize a larger intimidation including members of a wider spectrum of Hungarian right wing groups, including the uniformed paramilitary Hungarian Guards, who are essentially a group that likes to participate in 1944 Arrow Cross cosplay. 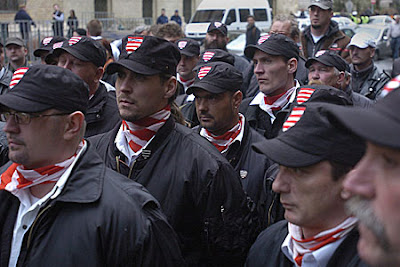 So naturally there was an even larger counter demonstration on friday. Thousands of normal folks gathered peacfully, separated from the nationalists and neo-Nazis by police barricades. 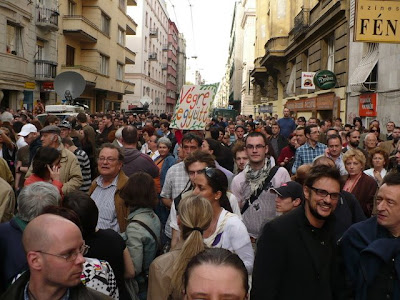 The right wing presence was a virtual Who's Who of Hungarian radical hate groups. Both sides faced off armed with... digital cameras and video recorders. The bigger the better. Hungarians hate to be photographed. During communist times, and since, when there was a demonstration or rally the police roamed the crowds snapping pictures, and so Magyars tend to think that photos will be used aginst them in a kangaroo court. Which, of course, they will be. And so during street demos and such civilians tend to use digital cameras as weapons of intended virtual agression. Below is a pic of the skinhead organizers, easily identifiable by their neo-Nazi T-shirts. Did I mention that the theme of the rally was "They call us Nazis but we're not Nazis - only those who look at our Hitler T-shirts and call us Nazis are Nazis!" I could not make this stuff up if I wanted to, folks. Really. 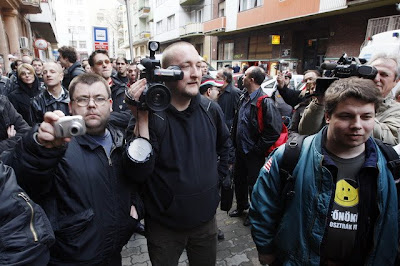 This present round of right wing circus acts will probably continue through the summer - these things go in cycles, and once they begin they tend to take on a life of their own. Lucky thing we had Geoff with us, whose huge teeth and threatening claws would protect us from any danger.
Posted by dumneazu at 8:04 AM

So what does the happy face hitler shirt say? Come on, I'm dying to know!

By the way, do you find it hilarious that this whole fracas apparently started when the right wing chick was charged a 100 forint service fee for her ticket? 100 forints? *Really?* Wow, you fascists are sure oppressed...

The shirt says "My Boss is an Austrian painter." And the signs at the Skin Rally say "Naci aki mondjak" means "Nazis are those who call us that"

The right wing is full of weird semantic games that only they themselves understand. It's the War of the Neurasthenics!