A Great Day on Eldridge Street!

In 1957 photographer Art Kane collected the top Jazz musicians in New York and had them pose for a photo which went down in history as "A Great Day in Harlem." Dizzy Gillespie, Thelonius Monk, Duke Ellington, you name them, they were in that photo. In a single image,. Kane managed to define an age, an aesthetic, a feeling. As they say in German, a zeitgeist moment…. 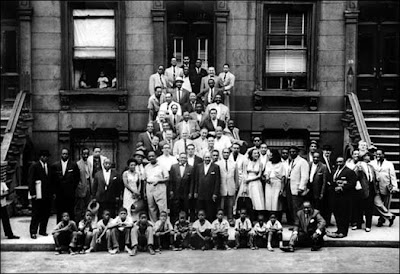 Fifty Years later, Klezmer musician, photographer, film maker, and writer Yale Strom decided to do a similar photo op to celebrate the renovation of the Eldridge Street Synagogue on New York's old lower east side... which is in today's east Chinatown. To this end Yale and the Eldridge Street Foundation folks (especially the amazing and energetic Hanna Griff) found the funding to bring together over 200 Klezmer musicians who were involved in the revival and survival of a musical genre which morphed from the signature music of Yiddish speaking Jews into something which was probably never intended to be an identity symbol for Jewish culture: Klezmer music. 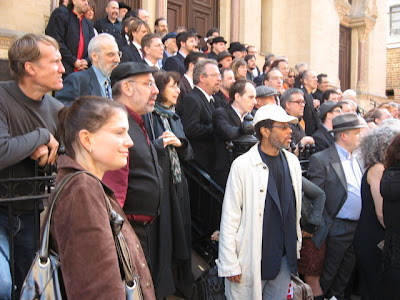 (Above: Yankl Falk, Stephanie Tarras, Jim Whitney and Don Byron) Now, truth be said, Yale’s take on the history of the revival of klezmer isn’t universally accepted, so some of the Klezmer revival Big Guns chose not to be in attendance. Ill health kept others home, while special guest - Israeli clarinetist Musa Berlin - was not granted an American visa for reasons known only to Homeland Security. Nevertheless, a lot of the machers did show up, at the unworldly hour of 11am on a Friday morning in the wholesale Bok Choy district of east China Town. Below we see Don Byron (formerly of the Klezmer Conservatory Band and now one of the world's greatest jazz clarinet/reed innovators), Annette Ezekiel of Golem, fiddler Alicia Svigals, drummer Eve Sicular, the legendary Klezmer drummer Elaine Hoffman Watts and her daughter, trumpeter Susan Watts, Yiddish poet and teacher Beyle Shaechter Gottesman, and Ray Musiker. 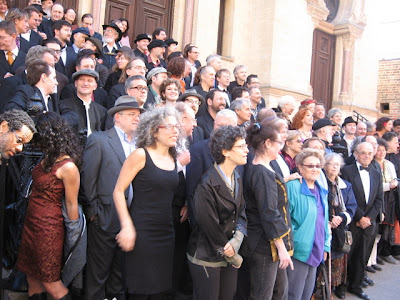 Dignitaries included actor/singer Theodore Bikel, whose records were the lifeline to Yiddish song for the 60’s generation (he's the distinguished chap in a black fisherman's cap and scarf, smack dab in the center. KCB singer Judy Bressler just behind him.) 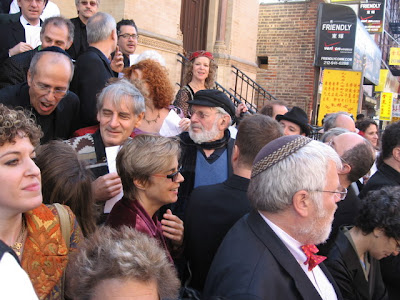 Pete Sokolov and Ray Musiker provided the link to the later klezmer Yiddish classical bands of Solomon Secunda, Abe Schwartz, and Dave Tarras. Eve Sicular, Dave Krakauer, and Hankus Netsky in the back. 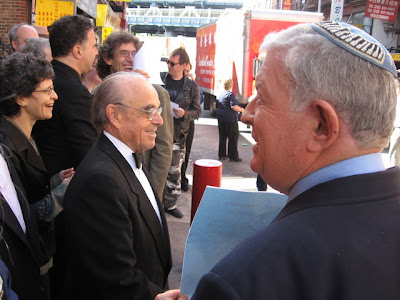 Dave Tarras could not be there, but his DNA made an appearance in the form of his talented great-granddaughter Stephanie Tarras, who plays clarinet in the Columbia University Klezmer Band, seen behind interloping amazing-ace klezmer fiddler Jake Shulmen-Ment. OleHashulem.. she even looks like her Great-Grandfather! Well, considering that I once met Dave Tarras... G-d bless genetics... 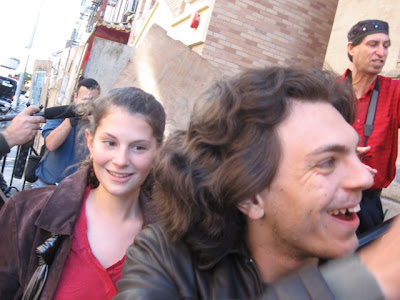 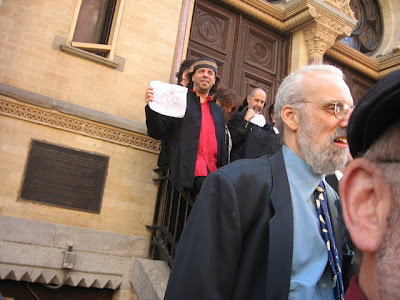 The noisy assemblage then marched down to Seward Park... in full blast. Chinatown rarely sees anything as noisy as this. (Art Bailey on squeezebox, Barry Mitterhof on mandolin, various Dutchmen blowing into metal things) 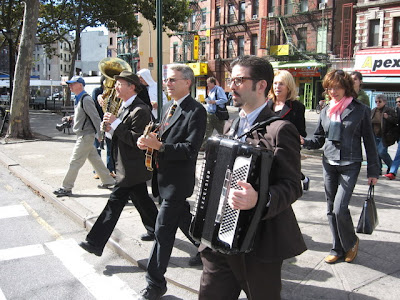 A jam session and park concert ensued... but it is not over. I'll be playing a concert tomorrow with this mass of klezmorim, and then going on tour in New York State with them. I'll keep you informed while on the road... Buffalo! Rockchester! Freedonia! Here we come! But wait! No Jewish event is complete without a Chinese restaurant... 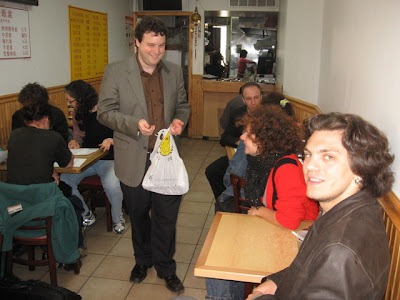 and east Chinatown is THE PLACE for oddball noodle soups... Super Taste Restaurant... right next to the Eldridge St. Shul... Lang Zhou style hand pulled noodles... better than the Lang Zhou in Bpest!! Four bucks for Beef noodle soup! Six bucks for the house special beef soup - a cauldron of rarely encountered cow parts swimming in broth and noodles. Fiddler Steven Greenman - who was a vegetarian when I first met him - let me have his tripe bits. 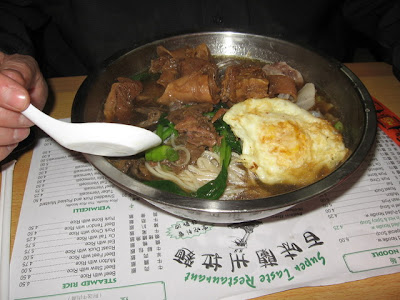 When Klezmorim die, they come here instead of heaven.
Posted by dumneazu at 9:24 PM

Bob - What a bummer! I knew there would be people I wanted to see that I would miss. That's me in the gray hat in your first posted picture, to the right of Byron. I got all the drummers to stand together in the photo - me, Aaron Alexander, Grant Smith, Dave Licht, Eve Sicular...we in the same location as Krupa, Sonny Greer, Jo Jones, JC Heard & George Wettling are in the original - the drummer's corner!

Hope you are well.
Charlie Berg