Sushi in Transylvania: The Final Frontier 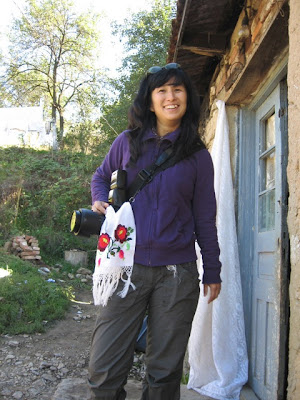 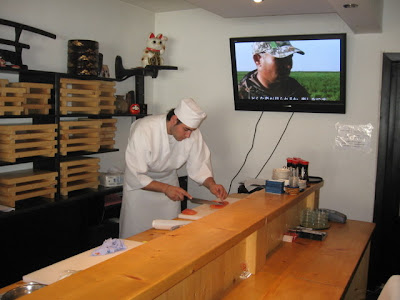 It's a cliche by now to marvel at the discovery of sushi restaurants in odd corners of the world, but finding a good slice of raw fish on rice in the middle of Cluj-Napoca (Hungarian name: Kolozsvar) the central city of Transylvania in Romania takes the prize. The Tokyo Restuarant is on a hilly street near the upscale Zorilor neighborhood, and after a week or so of mamaliga cu brinza and smoked meat, Fumie needs her rice fix and it is time for a trip to the sushi bar. 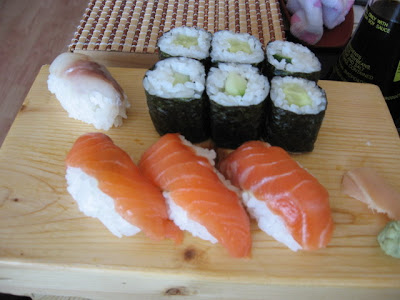 Fumie first learned of the place by reading the Japanese langauge blog of its owner, Mr. Tsuchiya Naofumie, a Tokyo chef who married a Romanian girl and moved to Cluj with her. Needless to say Mrs. Tokyo Restaurant speaks flawless Japanese, while Chef Nao has a pretty good handle on Romanian. And if you are just off the plane from Osaka, you can relax at the bar while NHK Japanese TV plays softly in the background. 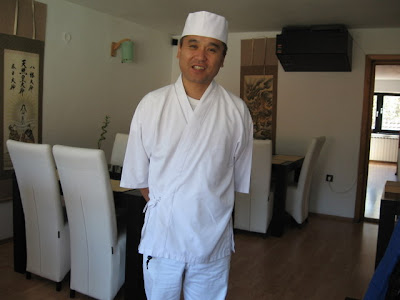 Chef Nao - with amazing effort - has managed to source fresh ocean fish for the restaurants sushi menu. No, you won't worry that carp is being served here... it is fresh tuna, salmon, and mackeral, better than sushi in most western European countries. Fumie even suspected the wasabi was ground fresh, something you won't find even in many pricey sushi bars in the west. 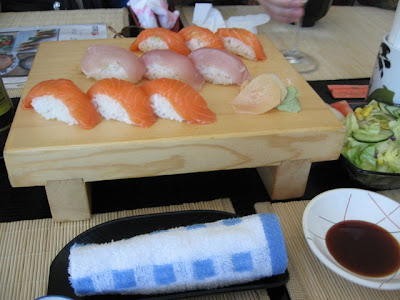 On this trip Fumie was chasing after Edo-centric of obsessions: a good bowl of ramen noodles. In Europe it is pretty rare to get a decent bowl of ramen that doesn't come from a plastic bag. The secret is in the noodle making. Now, home made noodles are a common item on Transylvanian tables, so why not make your own? Which is exactly what Chef Nao did, hiring on his Mother-in-law and some of her friends out in a nearby village to do the noodle kneading. The result is fantastic. 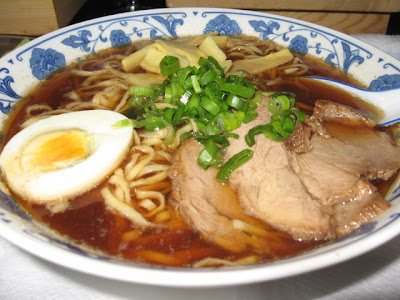 Served as a set lunch with a salad and a serving of gyoza (the dumpling skins are also makde by the Transylvanian aunties) sets you back about EU 6. And, true to Transylvanian cuisine, the serving is big enough that only a Transylvanian could possibly finish it. 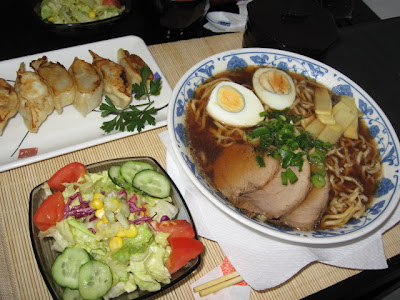 Having a Transylvanian village full of in-laws churning out fresh noodles and gyoza skins means Chef Nao may start distributing on a regional basis soon. He has taken the next step in making Romania a far, far better place in which to eat lunch.

Afterwards we hiked down hill towards our lodgings, amidst familiar Transylvanian town images... burping up wasabi and still amazed at the incongruity. Good sushi in Transylvania. 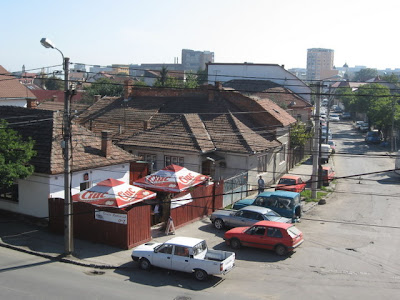 Okay, that does it. The Far Outliers are definitely going to make it to Romania on our upcoming trip to visit my brother in Strasbourg over the winter holidays. Will Dumneazu and Maica Fumie be in Budapest thenabouts? Ramen de burta. Yum.

Wow, it looks delicious! Thank you for sharing your adventures in that part of the world!

Dear Dumneazu,
I'd like to take this opportunity - there have been many others - to thank you for this wonderful blog of yours. I don't even recall how I stumbled across it (maybe via In Moyl Arayn?). Living in Germany -actually in the one town with the largest population of Japanese this side of London and thus the best chance of a delicious bowl of Ramen or Udon noodles - I have next to no knowledge about Hungary, Transylvania, whatever. It's a shame most probably. In these past months, that I've been following your blog there have been so many times when I thought, wow, I wanna go there, this should be great fun!

Maybe one day, when I'm done travelling to cool destinations such as Hongkong or Angkor, I will go back through your blog to put together my very personal guide to the Balkans - in the meantime I enjoy the reading tremendously.