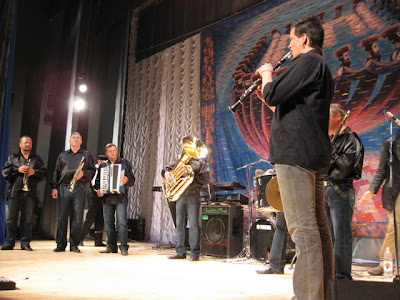 Christian Dawid is not exactly the kind of name one would associate with one of the world’s best klezmer musicians. Few Klezmer guys are named Christian, although a lot are named David. If you live in East Europe anyone named David (or, in Berlin, Dawid) is assumed to be Jewish. Christian isn’t, for purposes of ethno-pigeonholing, but listen to him play the clarinet and you might doubt you first assumptions. Christian plays with a lot of the best Klezmer bands internationally, and as a mainstay of the Berlin Klezmer scene, he really knows the music. His latest project is Konsonans Retro, in which he teams up with the Baranovsky family village brass band of of Kodyma, in the western Odessa region, Ukraine, right near the Moldavian border, and adds a heavy-handed touch of Jewish musical repertoire and aesthetic to their Ukraino-Moldavian folk style of wedding music, and vice versa. Here is the band as I first heard them – playing for the boat as it approached the port of Odessa just after breakfast in early May, 2007….
This is an approach that should have appeared years ago… someone with a full command of early and modern Klezmer styles working with local east European musicians who still maintain the folk style of local wedding music that fed the spring that made klezmer the world music phenomenon of the pre-WWI years in the suburbs of Odessa.
Odessa is the source city of so much Yiddish tradition. Unlike other ities in the Russian Pale of Settlement, it was Novorossiya at its best – the only city not where Jews were not governed by a rabbinical council. That meant that Jews were free to evolve into a secular, civil society. And that meant taverns and music. Even today the culture and dialect of Odessa is marked by the fact that before WWII over 30% of its inhabitants were Jewish. 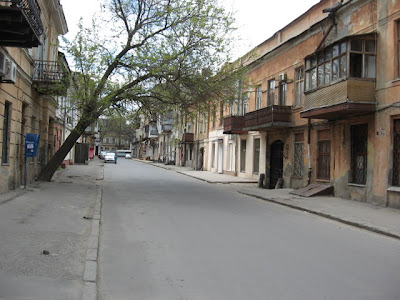 On the other hand, throughout its history Odessa has been a strong player in the Russification of the former Tatar lands of Novorossiya, and the result is that today there are very few speakers of Yiddish in Odessa. The Jews of Odessa mostly spoke Russian after the 1920s. And they made songs in Russian. Especially Jewish gangster songs. Such as the well known Odessa tune “Lemonchiki”

And Sonya had a hell of a rack.. (i.e., a balcony….)
My Grandfather, Moshe Onitiskansky, lived in Odessa for awhile after fleeing Kishinev (today’s Chishinau, capitol of the Republic of Moldova) after the 1906 pogrom. So did my Grandmother. And the rest is history.
Posted by dumneazu at 8:25 AM