The Buna Vista Club of Transylvania

Last week featured the performance of something billed as "the Transylvanian Buena Vista Club" at the Budapest Palace of Arts. Now, "Buena Vista" means something when reffering to Cuban musicians who all actually once played together, but this was a musical potpourri involving about six different Transyvanian traditional village bands playing in various combinations, often all together, which is something they never do in real life. It was more of a "Buna Vista Club" 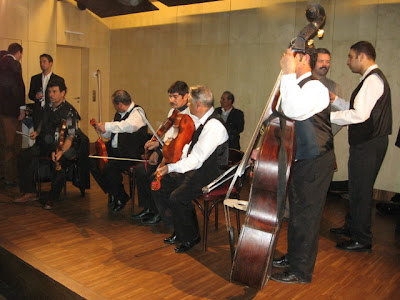 Quite honestly, when you fill a symphonic concert hall with, say, twenty violinists, six viola players, and three bass players, none of whom can read music, and have them led by five lead violinists, each acting as his own independant concert master and actively hating the other first violinists with a passion, all playing from memory in styles quite as different to them as samba is from reggae, well, let's just say I was quite pleased with the result in a sort of John Cage sort of way. It was cacaphony, but it was good cacaphony, and nobody could pin the blame on me this time. 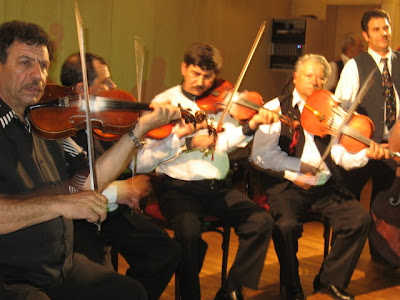 The Band from Szaszcsavas was there, as were the bands from Palatka, Sarmas, and also Zerkula Janos and Aunt Gizi from Gyimes. Zerkula plays in one of the most archaic of Hungarian fiddle styles, accompanied by the gardon, a log trough carved out in the rough shape of a cello and used as a percussion instrument. 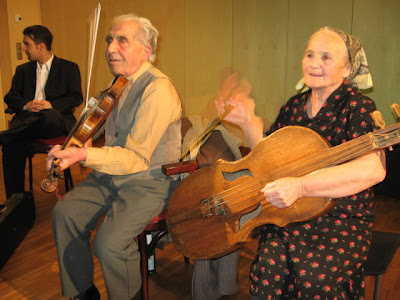 Afterwards there was a dance in the stuffed-shirt restaurant of the Palace of Arts. A snottier venue simply does not exist east of Vienna. 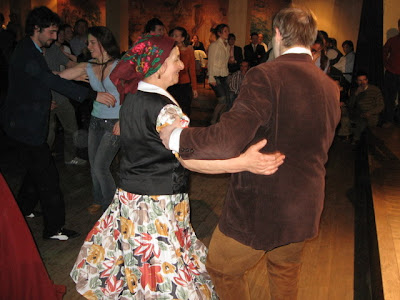 Sarah from Budablog was in attendance and was asking after a vioara cu goarna... so I introduced her to Dorel Kordoban and in a few minutes she was the proud new owner of her own turmpet fiddle. 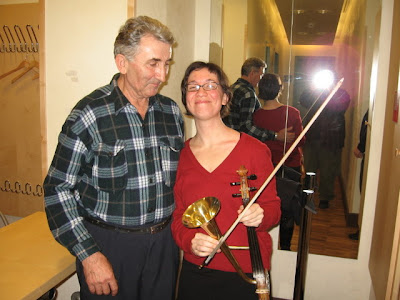 Here are a couple of videos I posted on youtube from the event... pardon the shakey camera work, it's just a little Canon digital camera... and dancers were often bumping into me (or I was bumping into them...)

you've definitely got an avant-garde streak you're not getting credit for.